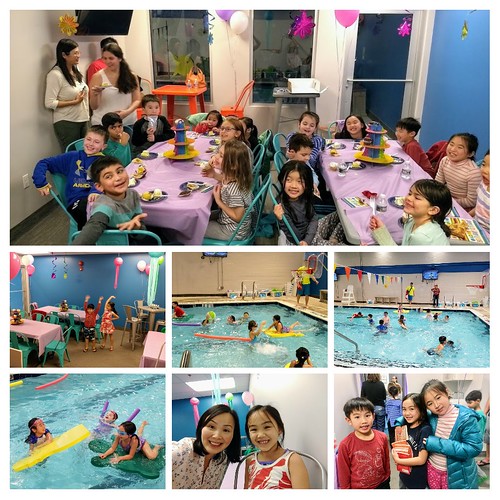 For the last seven years, we managed to avoid the over-the-top kids birthday party scene with small celebrations at home. However, as Anna's 8th birthday approached, she really hoped for a "friends" party at a legit venue. We emphasized that the party would be her only present from us and when she remained firm, I started looking for a party venue. If she had her druthers, she would have loved a laser tag party, but I convinced her to a pool party instead. One, she loves to swim, and two, I knew that Machine Performance Center (the place where the kids took several months of swim lessons) had just started hosting birthday parties and that it would be a great option.

Machine offers two birthday packages: Gizmo Splash ($350) or Gizmo Blast ($450). The more expensive package included all paper products, tablecloth, cutlery, room decorations, water/juice boxes and two dozens of cupcakes. We went with Blast because I wanted to do zero work. I know myself well enough that if we picked the cheaper option, I would be super obsessed with finding the cheapest deal for plates, napkins and hundreds of other things. I just didn't want to deal with that.

The birthday party was set for March 10th, from 4-6pm.

In the end, we had 16 kids splashing away in the pool. Everything went really well, and the birthday girl had SO MUCH FUN. Her big bright smile never left her face. 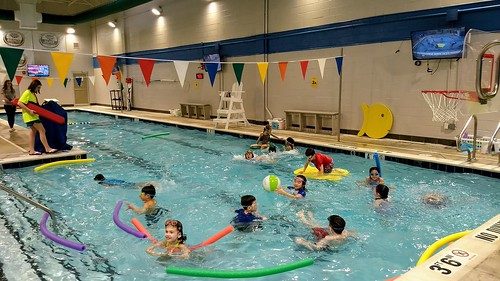 I have been to enough birthday parties to know that kids just don't eat that much at parties, so I figured with 16 kids and a handful of grown-ups, 5 large pizzas would enough. Luckily, Luke ordered 6 just in case and it turned out that we only had half a pie left. The kids were ravenous after an hour of water play!

And even though the venue provided cupcakes already, Luke insisted on a birthday cake. Who am I to argue a cake from Wegmans? My favorite cake ever! 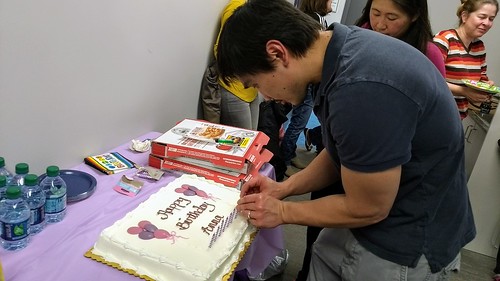 As the guests said their goodbyes and thank yous, Anna handed out these joke books as favors. We had a few siblings pairs in attendance and I thought it was very thoughtful of me to have two different books so the siblings didn't have to go home with the same one :)

The best part about hosting the party at a venue is that the mess is not yours to clean up. We gathered up all the presents and balloons and was home in no time. 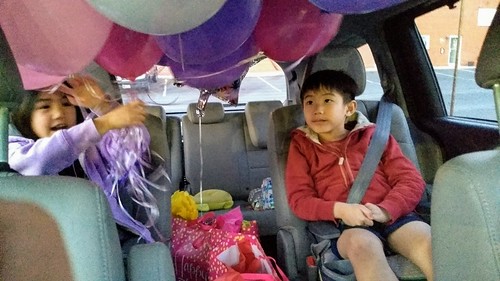 On Anna's actual birthday four days later, true to our word, we didn't get her presents or another cake to mark the occasion. We did, however, go to Outback Steakhouse and got the Bloomin' Onion because Anna loves onion rings and got this family selfie with it: 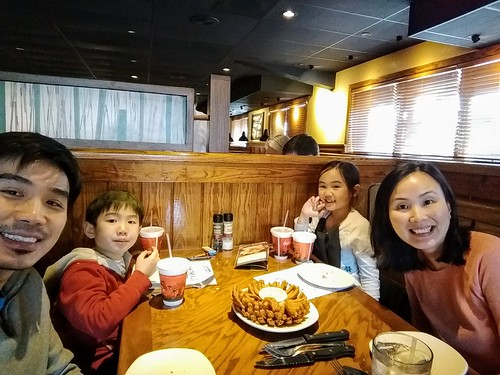 I am really happy with how our first legit birthday party went! The parents commented how convenient the location was (less than 10 minutes for everyone), all the kids seemed to have fun and, most of all, Anna was polite and appreciative of everything. It was also very stress-free for me, much more so than those small birthday gatherings we hosted at home in the past, believe it or not!

Although I don't regret the money spent on hosting Anna's birthday party one bit, in the future, we will stick with smaller affairs, such as how we did her 7th birthday. I still think that's the best way to go for a meaningful celebration...but at least now she has some wonderful memories of her 8th birthday!
Email Post
Labels: Anna Banana baby