I am late to the party, but I recently tried one of those meal delivery services.

It was completely free because someone had left a stack of HelloFresh Send Your Friend a Free Box coupons in the work break room and I was one of the lucky few who snatched one up before they disappeared. I signed up as soon as I got back to my desk :) The coupon had a $69.95 value, and by picking the family plan of 2 recipes (2 different meals, 4 servings per meal), I paid exactly zero dollars. It was a great deal to try something absolutely risk-free and be able to cancel anytime (as early as after my first box was delivered)! 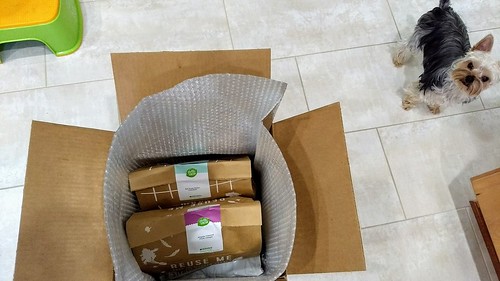 So how did it go? The box came as promised. It was already waiting for me by the front door when the kids and I got home on a Monday at 4:15pm. I didn’t plan to cook it that evening, so I just unboxed and put everything in the fridge. I didn’t get a chance to read the recipe cards until later in the evening and found lots of prepping involved. I didn’t think cooking a HelloFresh meal was doable for me on a weeknight, because after a long day of work, I just want to cook something familiar, easy and quick. Still, I planned to cook a meal the next day.

Tuesday I got home from work and, as expected, after I took all the ingredients of a meal out of the bag and stared at the recipe card, I was like, forget this crap, I am cooking something else. So I ended up mish-mashing whatever I had in the fridge and dinner was on the table in 20-25 minutes. I then mentally planned to leave work 30 minutes earlier the next day to give me more time to cook and focus.

As it turned out, the kids had a snow day on Wednesday so I stayed home with them. And FINALLY, on my day off, I had time to cook :) My first meal was No Fuss Pesto Chicken. I started my meal prep after lunch by washing the potatoes and cutting them into small cubes. That took at least 15 minutes already, so not counting the time I spent prepping other stuff, I don’t see how the meal could possibly be done in 30 minutes as promised when the potatoes and chicken were to roast in the oven for 25 minutes. In total, it took at least 40-45 minutes for me from start to finish. 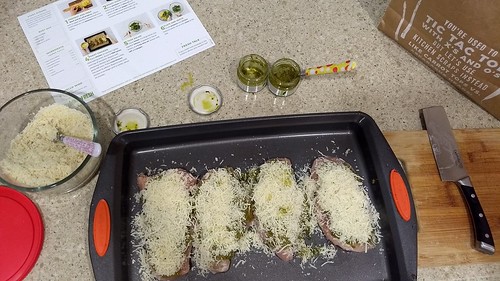 How did it taste? The best way to describe it was that it tasted like “conference” food. Not bad, but not that great either. Reminded me of food served at conferences or training! Luke liked it just fine, although by the second piece of chicken, he was just forcing it down. 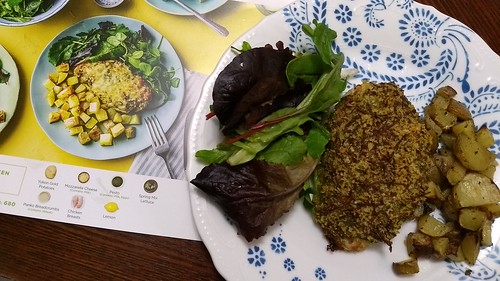 After this failure meal I didn’t even bother cooking the other meal, Maple-Glazed Pork Chops, per recipe. The whole process of peeling, cutting, boiling and mashing the sweet potatoes was too much for me. I ended up using the ingredients and cooked something else entirely.

Overall Impression – Now that my curiosity has been satisfied, I won’t be trying HelloFresh again, nor other meal subscription services for that matter. One, it’s too expensive to pay full price (remember, my two meals for the family was just under $70). Two, we just don’t like these type of food. I told Luke that I would totally get on board with a Chinese meal subscription service. “That’s what take-outs are for,” he replied. Touché.
Email Post
Labels: food stuff we bought