Given that Anna's last day of school was over a week ago, I figure it's high time to write a post about it before it fades into a distant memory...

Here she is on the last day of school: 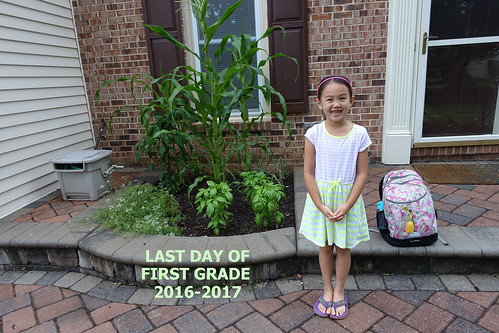 Perhaps not much difference?
But she sure has more gaps in her teeth! She lost 3 this school year... 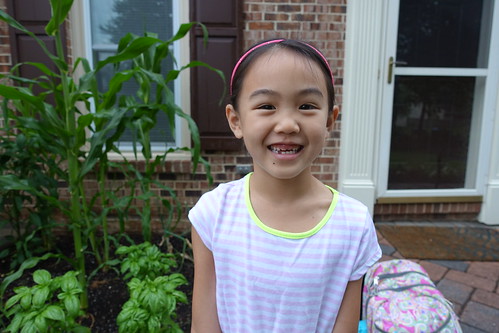 Overall, it was another fantastic year for my big first grader! She happily went to school every day (although before-care took until December to get used to, sigh), and for me, that's just THE biggest relieve. The fact that she also excelled academically is just icing on the cake!!

-- This year we only volunteered a handful of times despite my best intention to volunteer ALL the time. Lets see...Luke and I both volunteered for Pumpkin Math back in October, he chaperoned the field trip to Bureau of Engraving and Printing, and I helped with stuffing weekly Tuesday Folders (a job no one enthusiastically signed up for, but I did it *winkwink* to get on the teacher's good side;)).

-- We attended about half of the school-wide events (Halloween Fun Night, STEM Night, before-care's end-of-year event), and definitely the one time where all parents were invited to the Reader's Theatre performance in the classroom. Anna was assigned the role of narrator in Stone Soup and she did a very good job :) 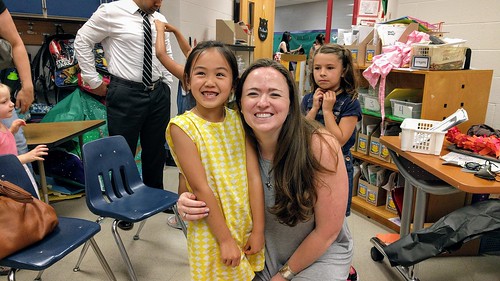 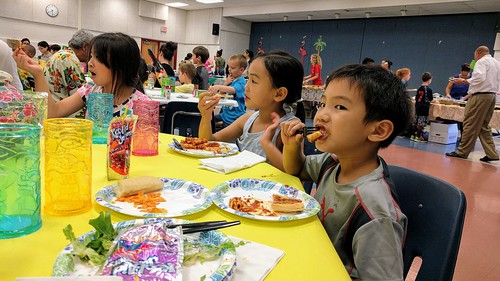 -- Even though Anna had a successful year, we both agreed that her Kindergarten year was better. The reason? Her teacher. Yes, Mrs. H was good and funny and silly and fair, but no one adored Anna like her Kindergarten teacher. All year long, she visited her K teacher every day before going to first grade and the K teacher actually emailed me throughout the year to tell me how much Anna means to her and she's just thrilled that she hasn't forgotten about her :) I really hope Will gets her so I can continue this teacher-friend relationship with her...although I am pretty sure we will keep in touch either way.

-- After my work moved further away in January, I adjusted my work schedule so I still dropped off Anna in the morning (although earlier at 7:15) at before-care and picked her up at 4:05pm every day. At before-care, I gave her homework assignments. She had to do them before she did anything else. #alwaysatigermom

-- This year I didn't get nearly as many calls from the clinic as least year. Yes!

-- It just so happen that Anna's two favorite friends from K were also in her first grade class. Maybe their K teacher pulled some strings because she knew Anna needed help with transition into first grade? If yes, I am forever grateful. Those 3 girls became even closer this school year and now have nicknames for one another. I have my fingers and toes crossed that they will somehow all end up in the same second grade together as well.
Email Post
Labels: Anna Banana school life