Besides the illness, the next hardest thing about our Taiwan trip was adjusting to the time difference. Right now, because of daylight saving time, there is actually a 13 hour difference between local Taiwan time and EST. I don’t know how some people are able to adjust in a few days, because I think it took us nearly two solid weeks to not wake up when it was still pitch dark outside. I read online that it normally takes one day to adjust to one hour of difference, so two weeks actually make sense. But boy was it brutal! No matter how tired we really were, our internal body clock just wouldn’t let us sleep past 4am. Then by the time we were ready to head out for the day (like around 9 – 10am….I would have liked to head out earlier but places in Taiwan open late), I felt like I needed a nap already. I think one of the reasons why I WOULD’T want to take another trip like this again for a long time is simply jet lag. It was just too much and so hard on our bodies. 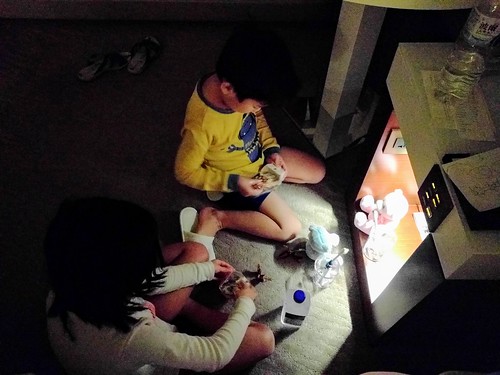 ^^Waking up in the middle of the night, hungry for snacks.^^

Next to the illness and time difference, the NEXT hardest about Taiwan was not having a real home base. Sure, my parents have an apartment in Taipei, but the apartment is in a pretty poor condition and nothing like what we are used to back home in the U.S. So, my mom actually arranged for us to stay at several hotels….but the bad thing about that was that it felt like we were always packing and unpacking and moving suitcases! For what it is worth though, the kids did very well with transitions from place to place. I had a harder time with it, but that was probably because I was the one doing all the work. 😞 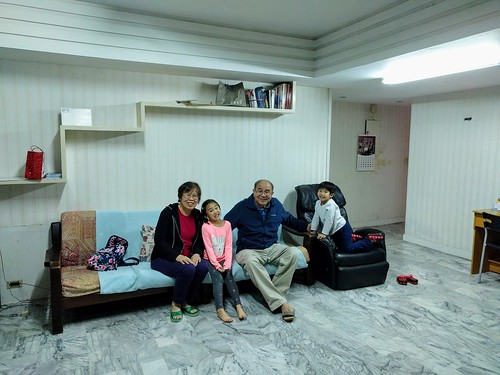 ^^The place where I spent some of my childhood years.^^ 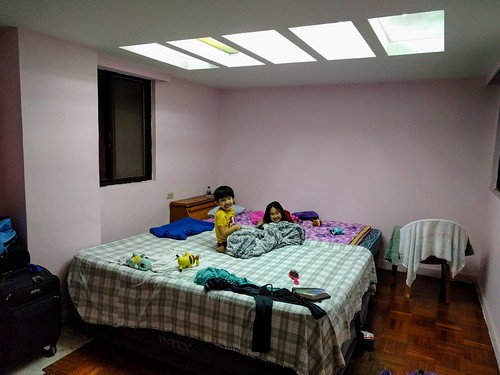 Anyway, for the first few days of our trip, we explored Taipei via MRT.

One day, we took Maokong gondola cable car all the way to the top of the mountains for scenic views of Taipei City. That was a neat experience, even though Anna said the ride was “too long.” After we rode the cable car back down, we stopped at Taipei Zoo. I would have liked to walk around Taipei Zoo more, but it was only our second full day in Taiwan and I knew we were already pushing the kids’ limits. Surprisingly, though, Taipei Zoo has many animals that we do not have at the National Zoo, such as penguins and rhinoceros! 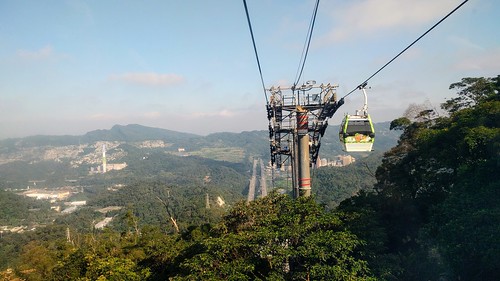 On another day, we went to Tamsui, a quaint seaside town, with my parents’ friends. I have great memories of Tamsui when Luke and I visited over 10 years ago…strolling hand in hand exploring roadside stalls and shops. Unfortunately, this last trip with the kids was nothing like that, but the kids weren’t the ones to blame either. See, my parents’ friends had a different agenda in mind, which included riding the ferry across the river to Bali, a neighboring waterfront village, and then renting multi-person bikes because they thought the kids would enjoy it. Well, I guess the kids did at first, but then it got old quickly. Meanwhile, my dad and I were huffing and puffing and not having any fun at all. Grrr. After we returned the bikes, instead of finally walking around Tamsui, the friends rushed us to this restaurant that they wanted to take us but it was closing at 2pm so WE MUST HURRY. Ultimately, I know my parents’ friends wanted to show us around and had good intentions, but it wasn’t how I imagined our day in Tamsui would be.

After we finally got back to the hotel that afternoon, the kids and I fell into deep sleep. That night, Anna threw up no less than 3 times and thus begin her illness.