monday morning catch ups. (the first half of July!)

It's time for another catch ups post to keep track of our daily life.

/1/ Last Friday, Anna finished her first two weeks of summer camp at the nearby RECenter. The overall experience was....okay. She gave it a rating of 5 out of 10. It was a "variety" camp, and her biggest dislike was the daily outside time. It probably wouldn't have been so bad if the weather was decent, but we are having one of the hottest summers ever (average temp in the 90s every day) and she just doesn't do well in the heat. The kids also had to eat lunch outside, which was just ridiculous to me. Even though it was under a tent, the humidity and heat would still put me in a bad mood as well.

On the bright side, Anna did say that if it wasn't for the outside time, she would have loved the camp. I liked that there was daily swim. All in all, it was one of those "you get what you paid for" type of situations. This camp was on the cheaper side so I really wasn't expecting much. She's in a new camp the next two weeks and we shall see how it goes. I will do a complete camp review at the end of the summer :)

/2/ Will is loving his own summer program at school. Each week is a new theme. So far - Star Wars & Space, Ocean & Beach, and Western Round-Up. This week is Super Hero and there will be a magic show on Party Day. So, yes, he's having a great, fun-filled summer!

/3/ We came back from Williamsburg on the first of July, and here is a summary of what we have been up to:
-- Played with sparklers and other fireworks - on 7/4 and again on 7/15 (because fireworks were B1G2 FREE). Kids had fun! Anna is no longer afraid of sparklers!
-- Cub Run RECenter fun pool with friends. $16 for the entire family.
-- An impromptu gathering with hubs' side of the family, where we had pizza and played with more fireworks (Pop Its).
-- In preparation of DW, we watched The Lion King, Tarzan, Mulan, and Pocahontas.
-- Discovery Trail Map -This is my own little project and we only have 3 more parks to go before that prize pack is ours :) I will blog more about this and share the pictures when we are done.
-- Played tennis twice at Nottoway Park.
-- Piano and swim lesson. I am disappointed that the swim school will be closed in August and September, but they will start again in October.
-- Luke gave the kids our old phones and they learned to text. But mostly they are using it to play #pokemongo.....#gottacatchemall. 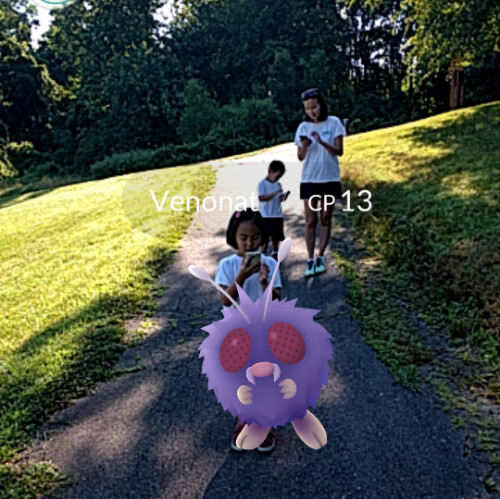 ^^The only time they will walk without complaining.^^
Email Post
Labels: catch ups love Summer 2016