It's official - school's out!

Here is Anna on the first day of kindergarten... 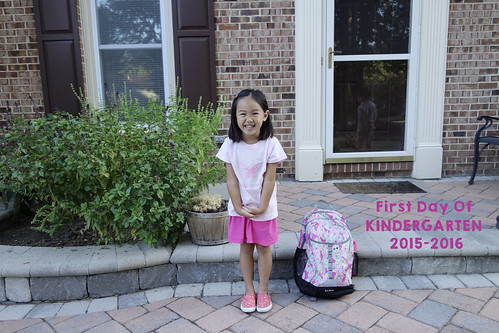 And here she is now. It doesn't look like she grew at all, but according to a height chart at school, she actually grew almost 3 inches. 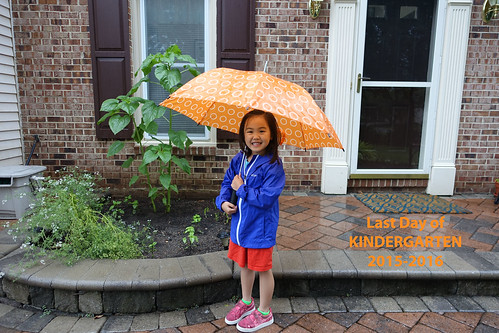 I tend to have more to say when it comes to Anna and school than I do with Will. I think it's because Anna has come such a long way, from the day she stepped into preschool to now. I still vividly remember her bursting into tears whenever we took her to school in those early years (yes, YEARS!). But now? She loves school and genuinely didn't want her kindergarten year to end. She can write (most words are phonetics and adorable), and full-on read pretty much anything these days. Her favorite class was art (she won a few awards) and least favorite was PE.

Some of my thoughts:

-- Before Anna started kindergarten, I looked forward in volunteering regularly. It turned out, I/we only volunteered a handful of times (International Day, Pumpkin Day, Field Day). But each time we showed up at school, it thrilled her to no end. 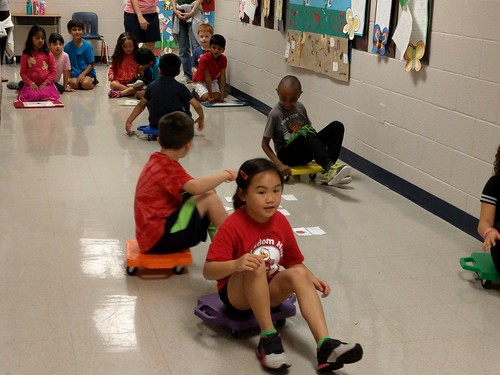 ^^@ the Field Day. It was held indoors because of the impending rain, but it never came.^^

-- I love after-school school events and plan to attend as many as possible next year. This year, we only did Dr. Seuss Night (back in March) and, just last week, her before-care's end-of-year event. A night off from cooking and a way to pass those witching hours? I am in. 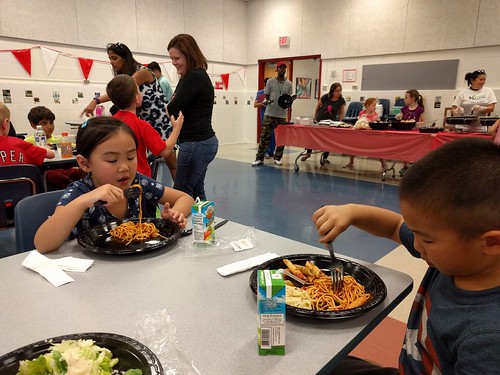 -- All year long I dropped Anna off at school in the morning and picked her up when it ended in the afternoon. I was able to swing that because of my 3-minute commute to work. I am not sure how many working moms can do that so I am grateful...but it's coming to an end when she's in first grade because my client is moving :(

-- Also all year long I wrote her a lunch note daily. I ended up writing pretty much the same things ("Have fun at school!", "Have a great (insert the day of the week here)!", "See you after school!") over and over. I probably could have re-used them (like pulling a note from the week before) to save time, but I didn't. I wrote a new one EVERY. SINGLE. DAY. Toward the end of the school year, I started finding notes from HER in MY lunchbox :)

-- I became friends with the moms of two girls - Marissa and Kayla - that Anna talked about the most at home. We have had playdates and I hope we can keep in touch over the summer. I hope they are all in the same first grade class together!

-- I struggled to keep up with all the papers that Anna brought home. Most of the time, all her cute writings and drawings went straight to the recycling bin and I felt sad about losing precious memories. But just before school ended, she brought back ALL the stories she wrote throughout the year from Writer's Workshop, neatly organized and stapled. Those stories are my newest treasures. 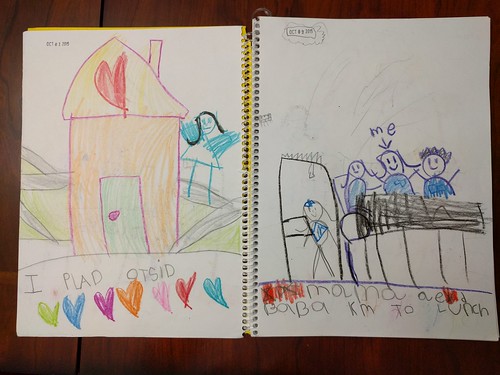 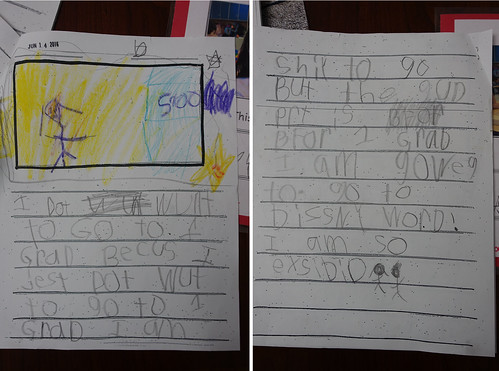 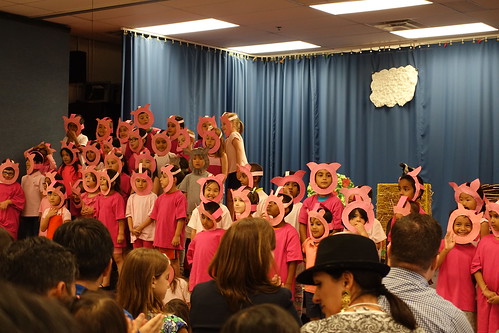 ^^Smiling straight at the camera at The Three Piggy Opera, can you spot her? Anna was a narrator and her line was: The second pig met a stick peddler.^^

-- Anna had the most awesome teachers this year. She clearly adored them, and they were just so kind and caring to her. This was especially important because of Anna's sensitive nature and issues with throwing up. Without me saying anything, her main teacher, Ms. R, emailed me with suggestions on ways we can make Anna's transition to first grade run smoothly. Included in her email, she wrote, "Anna is very special to me and I have loved being her teacher." :) 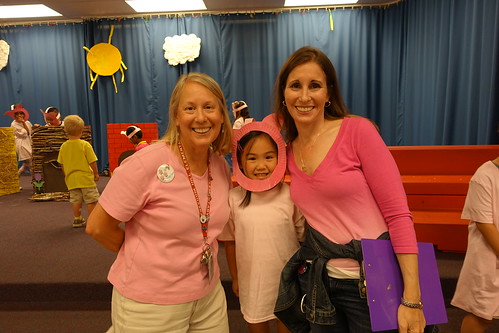 -- The school year flew by. The phrase "the days are long and the years are short" takes on a new meaning once you have a kid in public school!

Overall, I am really, really happy with how Anna's kindergarten year went! As usual, I am already nervous about how the transition to first grade will go for her (validated by her story above)...but summer first. We are off to Williamsburg!
Email Post
Labels: Anna Banana school life