Again, just a quick post to keep a record of our family life. 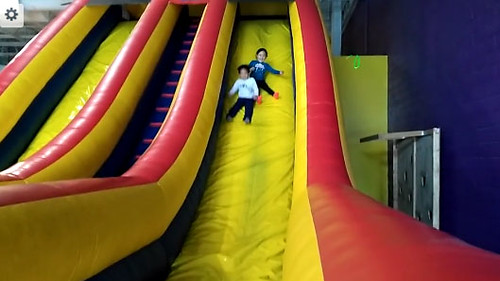 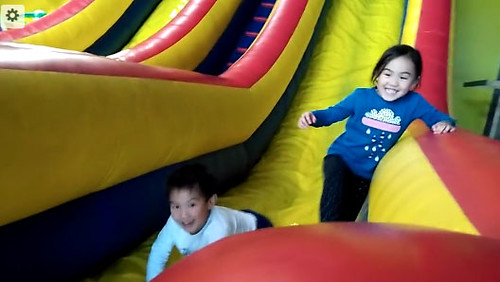 /1/ The kids attended a bounce house birthday party and had SO. MUCH. FUN. This particular bounce house, Sport Bounce of Loudoun, is about a 30 minute drive for us. The kids have actually received several birthday party invitations with this venue in the past, but this was our first time there. The birthday boy is a good friend of Will's at school, so we decided to go this time :) It did not disappoint. Bounce houses, slides, pizza, cake, pretty much heaven on earth for the kiddos.

/2/ As I mentioned yesterday, we hosted a BBQ over the weekend. It was another last-minute gathering, but we somehow managed to have 12 adults, 4 kids, and 1 baby. We had a fairly simple spread -- steak/chicken kabobs, ribs, hot dogs, potato salad, macaroni salad, corn on the cob, veggies with dip, and fruit. And of course, people brought desserts -- cheesecake, Duck Donuts, and ice cream bars (Haagan Dzas - yum). It was pretty successful! The adults talked and the kids played outside (thanks to Anna and Will's older cousins for keeping watch!) I am already planning the next cook out and I want to include burgers on the menu next time.

/3/ Speaking of next time...next time, we will know better on how much to buy to feed a crowd. I think we bought over $40-worth of food than necessary. Not that the food will go to waste, since we will eat them eventually...

/4/ Anna received this My First I Can Draw doodling book for her birthday and has finally gotten around to draw in it recently. The book is pretty cute, with easy to follow step-by-step instructions to draw all sort of animals. Even Will, who's reluctant to draw, does very well with it! Sometimes we all sit down and draw together, which makes me feel like a good mom. I need to get Will his own book though, because Anna doesn't like him drawing in her book. Often he will just sit on side, handing her gel pens instead ("What color would you like Anna? Dark green?").

/5/ I signed the kids up for swim class at the local rec center this morning. This will be our second attempt with the rec center swim classes. The first time we did it was at least two years ago, with parents in the water with the kids, holding them the entire time. We were not motivated to go after the third class. This time, the kids are old enough to be in the water on their own so hopefully it will be more effective. They will be in two separate classes, but at least starting around the same time, with Anna's ending 15 minutes later, so not a lot of waiting around, which is a big plus.

/6/ Right now, Anna is super into McDonald's Happy Meal emoji plush toys. She has two that she hangs on her backpack like they are the greatest things ever. I guess to her they are :)
Email Post
Labels: catch ups love