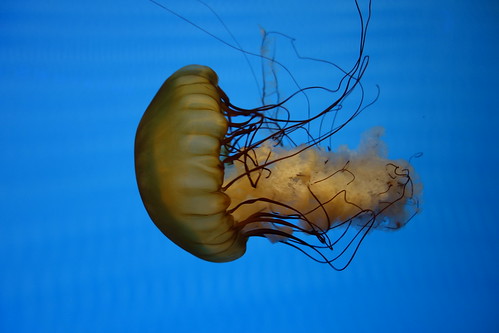 This weekend we joined some friends and visited the National Aquarium  – located in Baltimore.

Our friends are members, so under their membership, the kids got in for free and Luke and I went in at a discounted rate, but it was still rather pricey.

But inside the aquarium, the tanks and pools were gorgeous to look at. All the marine life, water and colors were very pretty. I am always happy to stare at little colorful fish :) I even touched a jellyfish at the touch pool. It felt like rubber.

My only gripe was that the aquarium was so packed full of people, and it was really hard to marvel at the gorgeousness with people all over the place. My friend, who home-schools, says it's nothing like this on the weekday.

Because of the crowd, we just had an OK time, not bad, but not great either. If we go again, I will definitely consider taking a day off during the week. Her membership doesn't expire until September :)

Anyway, before we left for the trip, I told the kids that they were NOT to run around and act crazy at the aquarium. I expected them to come away having learned something. I told Anna that she needed to write me 5 sentences on the excursion and Will that he needed draw 3 things that he saw. (Haha I’m so hardcore.)

Anna finished her sentences as soon as we got home: 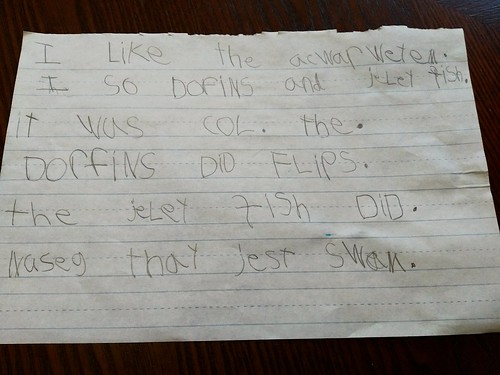 Getting Will to draw was *such* a power struggle, on the other hand. He flat out refused to do it...until the next day when Anna got to watch Pokemon and he couldn't because he didn't do his assignment.

So finally, he reluctantly drew this: 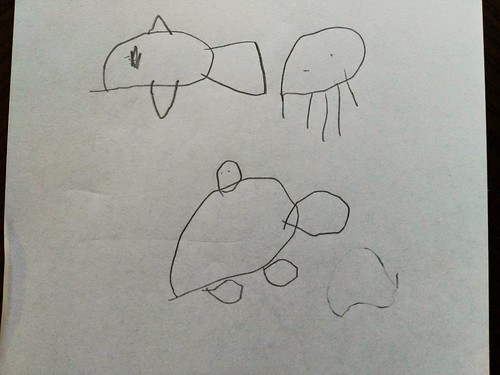 Tell me, what do you see?

Well, between the aquarium and all the activities we did on our Roanoke trip, I feel like we have been too spendy lately, especially since the kids don't seem to appreciate any of it. I am ready to buckle down and seek out some free alternatives around town.
Email Post
Labels: Anna Banana Around DC Willy Wonka