A very happy happy birthday to my best girl! 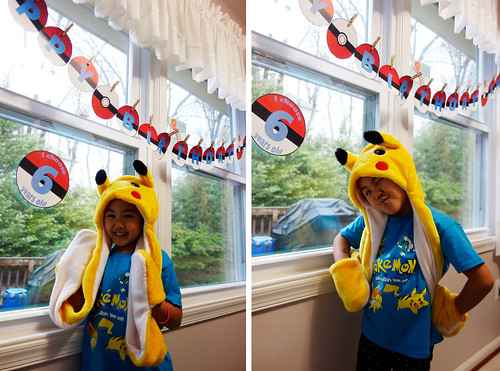 This year I managed to throw together a last-minute birthday party for Anna. It was very simple, but she loved it. First, we went to Chuck E Cheese's (her request) with a group of friends (5 kids total). Then, instead of eating there, we came back home, where more people joined us, to have a little get-together lunch in honor of the birthday girl. Super easy...that I would do it again in a heartbeat.

We went to CEC right when it opened at 10am. Maybe it was because it was a Sunday, maybe it was because of daylight saving, but the place was empty when we arrived. What a nice surprise to not be surrounded by a bunch of hyper kids. An added bonus: When they flipped on the switch, tickets came flying out of each machine and we went around and grabbed them all! Haha, off to a very good start! 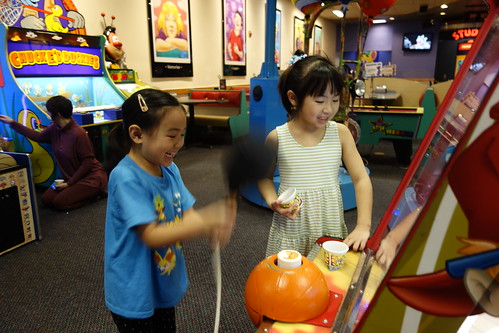 At first we thought that we could probably handle all the kids on our own, but I am definitely glad that the parents came along too. There was no way we could have kept track of everyone's tokens and tickets. Not to mention that everyone all wanted to run off in different directions.

All the kids left with some goodies about 90 minutes later -- candies, stickers, tattoos, plastic things. Will hit the jackpot with a toy rocket, worth 200 tickets. 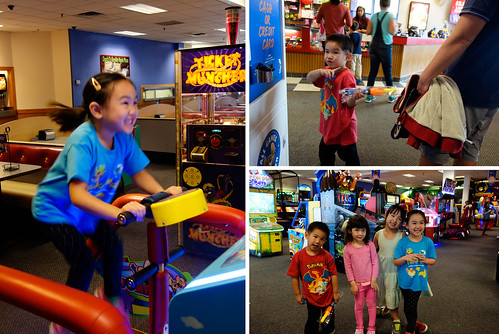 Back home, this was the set-up. Pizza on the kitchen counter & fruit and veggie platters on the table. We over-estimated on the food, but it's always good to have extra rather than not enough. No one went home hungry. At least, I hope not. 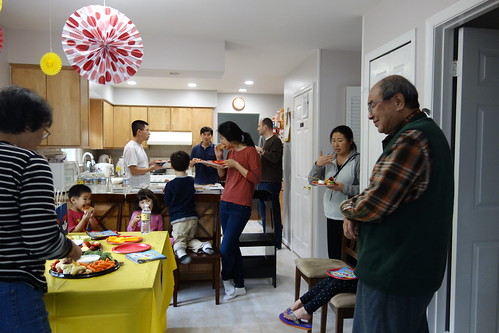 As for decorations, a couple days before the party, I hopped on Amazon (while watching Fuller House) and bought some party supplies. Everything red and yellow, the colors of Pokémon (her favorite thing at the moment). I could have re-used what we have from Will's birthday, but I wanted something more girly. I also decided to make a special Pokémon banner, instead of putting up same one I use every year, to tie in the Pokémon theme a bit more. It was a fun DIY. Anna helped me put together the goody bags, which she loved handing out at the party. 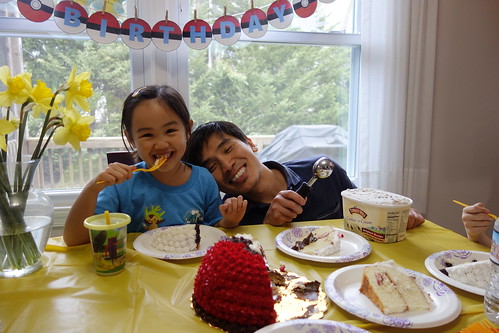 ^^The hubs cut those daffodils from the front yard that morning. They matched the color scheme perfectly.^^

The kids played, the adults chatted, and after the majority of guests left at 2pm, Anna opened her presents. She received lots of wonderful gifts, but I think her most favorite is this Pokémon chest tin to carry all her Pokémon goodies in. 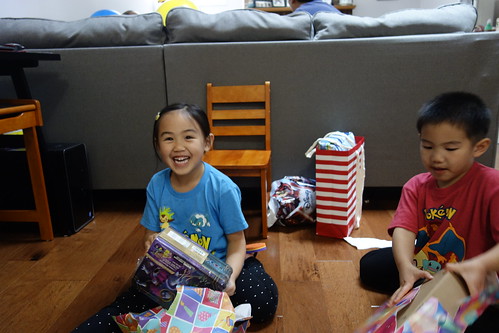 So, that was the birthday party. So grateful that everyone was able to join us to celebrate Anna on such short notice. We literally just texted/emailed with a "Hey, Anna is turning 6. Want to come over for pizza and cake?" A huge, hearty THANK YOU to everyone. 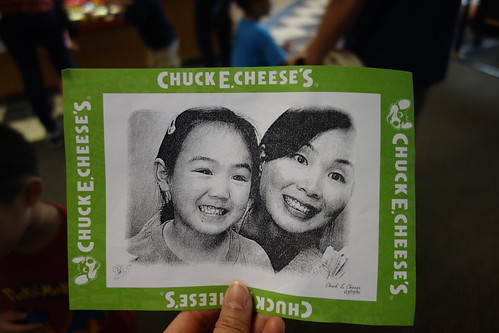 I don't really share too much personal stuff about Anna anymore on the blog, but here is a little bit about my newly minted 6 year old. As I mentioned, right now, she's all about Pokémon. She has this Pokémon book that she has flipped through so many times that the pages are falling out. She can spew out interesting facts about a lot of the Pokémon characters. Haha, I wish she was this diligent at schoolwork.

But in all seriousness, speaking of school, she's continuing to do very well, learning to read more and write more. Picking her up from school is a highlight in my day because she fills me in on the detail of school happenings as we drive home. Last week she told me that one of her goals at school is to write with more details and, that at guidance, they talked about being honest. She told me all this without any prompt and I just love it when she shares with me.

Currently, outside of school, Anna only has piano. I am not the type who cram the children's lives with tons of activities, but sometimes I do feel that our kids lack new experiences and learning opportunities and that they are going to be behind their peers. Am I over-thinking it? Maybe. But while I figure it out, I think to what seasoned parents have told me: Children NEED their unstructured free play time. If that's the case, I win the parenting award because my kids have plenty of those. 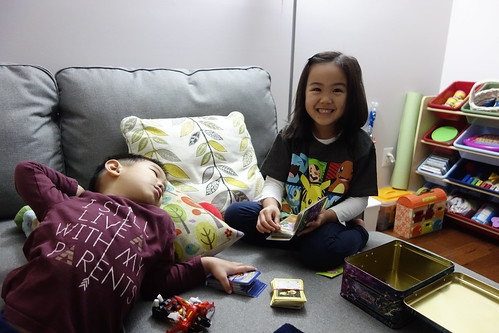 Tonight, as we were drawing together, I asked who her best friend is. She responded, "Marissa." I said, "Not Mama??" Then she said, "Marissa is my best school friend, but my BEST friend is Mama." OKAY, nice save, I will take it :)

At 6 years old, Anna is sweet, kind, and generous. I don't know anyone else who would be so willing to share half of her birthday loot with her little brother. "Will, you can have half of my Pokémon cards." Sure, she can be moody and demanding and downright annoying, but she's a kid, right? I can't believe 6 years have flown by....12 more years until she's out of the house. Someone hand me a tissue.
Email Post
Labels: Anna Banana