This year I signed the kids up for an Easter egg hunt at Colvin Run Mill. We did it two years ago and decided to go for it again this year. It was $6/per kid, but totally worth it for me to go to an organized event as oppose to a chaotic free one. Although the weather had been sunny and warm-ish the entire week, the temperature dropped over the weekend and rain/snow was the forecast. I don’t know how we always get so lucky, but the precipitation held off until we were in the car, driving home. So it was yet another successful egg hunt event!

The only downer to the day was that Will wasn’t feeling well. He had stayed home the previous day from school due to a low-grade fever, but when Saturday morning came, he didn't want to miss out on the egg hunt. Once he got there, I think he was just really tired and needed a nap, so he wasn’t his happy self. 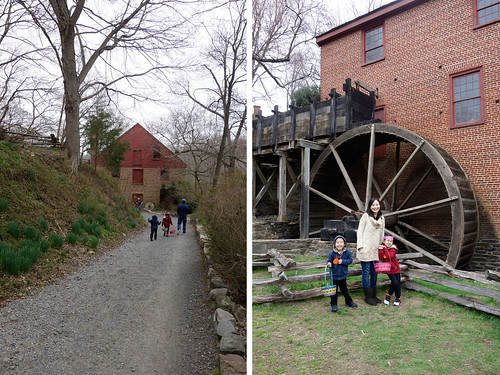 Prior to the egg hunt at 11:15am, the kids made a couple of crafts and then the whole family took a walk around the mill. And here is something fun that happened. As we were finishing taking pictures in front of the big waterwheel, a mom with two kiddos came up to me and asked if I have a blog and said that she refers to it for places to go with kids. Hehe, I have been blogging for nearly 9 years and that was the first time someone came up to me and said something. Pretty cool :)

Okay, I guess there were actually two downers to the day. The second one being that just when the actual egg hunt was about to commence, my camera died. So no pictures of kids scrambling for eggs, but here is one after the egg hunt was over. 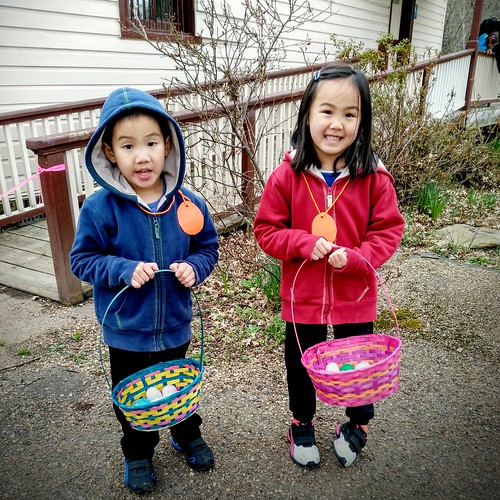 ^^I can always tell when Will is tired by his eyes.^^

Anyway, Anna went as fast as she could and grabbed ~15 eggs (over the 8 egg limit, oops!) and Will got 7 eggs. There was actually another egg right in front of him, but he was too tired to even bend down to grab it.

We didn't open the eggs right then and there because the temperature was dropping steadily, but once we got home and the kids opened them, they were delighted by all the little treats.

I am guessing that this might be the last (or next to last) year that we will do Easter egg hunts. Kids are older now and the magic is almost gone. WHAAAAHH!!!

----
Just one last note: Last year we "planted" jellybeans and it was a smashing hit. I am going to do it again this year and I just want to mention it again in case you are interested! It was so memorable for the kids that they are still talking about it. In fact, Anna wrote a story about it at school and it made her teachers laugh.
Email Post
Labels: Around DC love