Our Fantasy Cruise: Recreation, Characters and Princesses, and Things I Want to Remember

Continue on with our Disney Fantasy trip report. Read here and here to catch up.

First, a picture of AquaLab. I mentioned it in my previous post, but didn't post a picture of it, so here it is. It is basically a water playground with lots of fun features for the kids to get wet. I was surprised that this space was always pretty empty whenever we went. It even has benches for the parents to sit while watching the little ones play. A great play area, in my opinion. 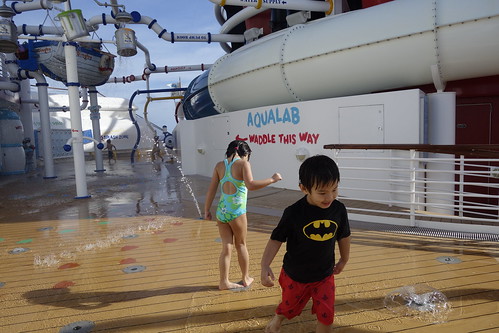 We only tried Goofy Golf and while the course was cute and adorable, it was way too windy (we did it on a "day at sea" day) for it to be enjoyable. So I recommend doing it on a port day, while the boat isn't in motion. Either way, the kids are definitely getting better at mini-golfing. Most of the time, they even got the stance right :) 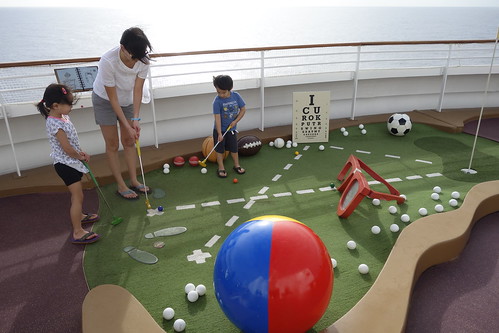 Anna and Will aren't particularly interested in Disney characters/princesses, but before we left, I saw this awesome idea for getting their autographs on a mat frame and turning it into a keepsake, into something that might actually see the light of day when we get home. This idea stuck with me and it became a little personal project.

But once we got on the boat, for the first six days of the cruise, I didn't do anything. The kids didn't beg to have their pictures taken with Mickey and I wasn't about to force it either -- the lines were often too long and I didn't have the mat frame with me anyway. 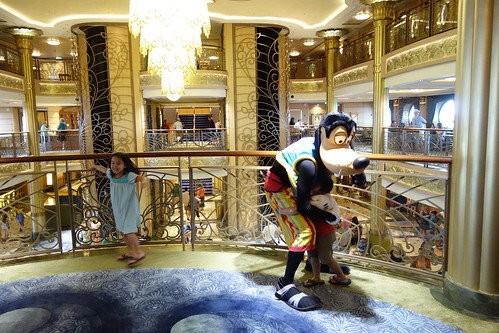 But then they announced that we weren't going to make it to Castaway Cay and instead, there would be extra sessions of character appearances while we float at sea for another day. As I said, that was such a sad news (missing Castaway Cay) to me, but that meant I was able to do my little project after all. 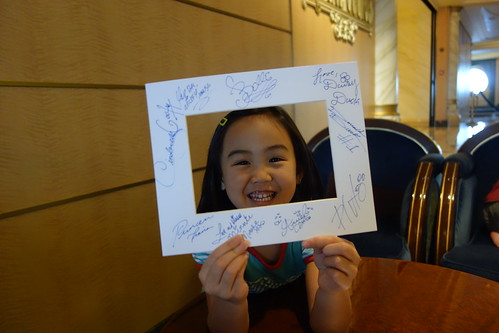 ^^I still see two blank spaces that would have been perfect for Anna and Elsa to sign, but the kids were DONE.^^

So that morning on the last full day of the cruise, for about 75 minutes, I dragged the kids all over the boat, with the promise of glow sticks when we get home, and got a total of 10 signatures :) Mission accomplished.

Things I Want to Remember 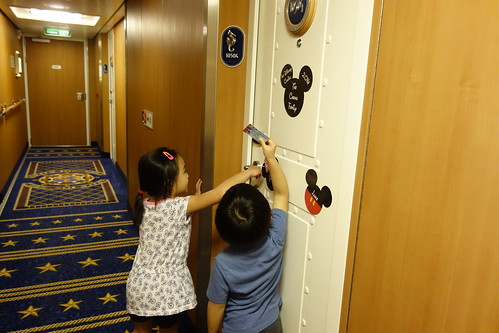 (in no particular order)
-- Kids rushing down the hallway and competing on who gets to open the door.
-- Similarly, pushing buttons in the elevators was also a huge thing. "Anna, you didn't really push the button because I already pushed it."
-- Kids taking turn to sleep on the top and bottom bunk. They both wanted the top.
-- Anna saying that her favorite part of the cruise was "sleeping with Charmander." Um, you can do that at home?
-- I randomly chatted up with a mom in front of me while waiting in line for Daisy Duck and she asked, "Do you feel that it is loud in your room? I can hear lots of kid noise in mine." Turned out, our rooms were next to each other. LOL.
--Going up to Flo's Cafe and bringing down fries, spicy chicken patties (Luke ate 3), Mickey pretzel, and fruit to eat in our room, for an afternoon snack.
-- Will eating so much bread and Anna mac n' cheese. I loved having salad for lunch. Luke ate lots of crab legs.
-- The kids were ALWAYS together at the kids club. They really are besties, when there are no other options, ha.

Up next: The ports of call and my final thoughts :)
Email Post
Labels: Everything Disney travel