In this post, I will talk about the things we did while on the boat!

Hands down, the kids enjoyed the pools the most while on the boat. The Mickey's Pool on Deck 11 is where the kids spent most of their pool time. It's not big and gets very crowded during peak hours (~11a to ~5p), but the kids were very happy to just splash around. The Donald's Pool, directly in front of Funnel Vision (that giant movie screen), is a bit deeper and the kids only played there when we got in the water with them. I have to say that even though it gets crowded up on Deck 11, we never had trouble finding a table for eating or loungers to put our stuff. 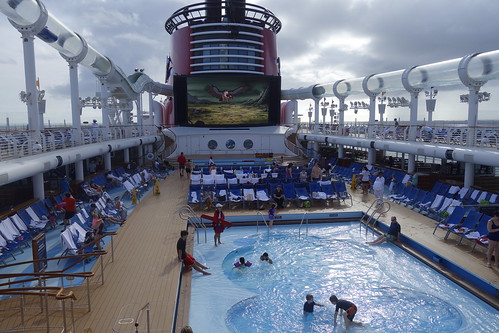 See that enclosed acrylic tube above? That's the AquaDuck and Luke and I rode on it twice. We just left the kids in Mickey's Pool and off we went! I think possibly only on a Disney cruise would we feel comfortable doing that. As we went down and around the ship, we looked for the kids below. It was a lot fun :) 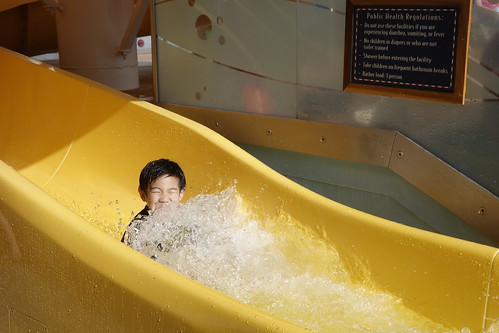 The kids were too short for AquaDuck, but there is a kiddie slide, Mickey's Slide, that Will went down over and over. 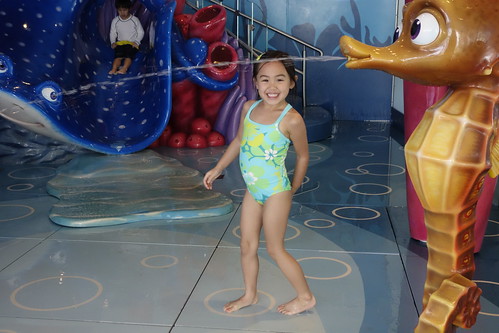 Nemo's Reef is a whimsical water play area for kids 8 and under. There is another splash area, AquaLab, on Deck 12, that older kids can go to. My kids went there too and had a ball as well.

The Oceaneer Club/Lab is what Disney Cruise Line (DCL) calls their kids club. I was really looking forward to the "free" childcare, where I could just drop off the kids and the adults could do things on our own. But as it turned out, the kids club left me slightly disappointed.

Here is why: While the Club/Lab has organized activities (Magic PlayFloor, Piston Cup Challenge, Super Sloppy Science, etc), led by the counselors, there are also computer games and big screen TVs at every corner of the space. Now I don't know about your kids, but mine will ALWAYS choose computer games over anything else. So basically every time we dropped off the kids for 1-2 hours, they were getting 1-2 hours of screen. I know I am slightly neurotic when it comes to my children and screen, but I just wished the counselors were better about encouraging the kids to participate. However, I do know that they have a no-force policy, so I guess the problem here is just me, not DCL's to blame :) 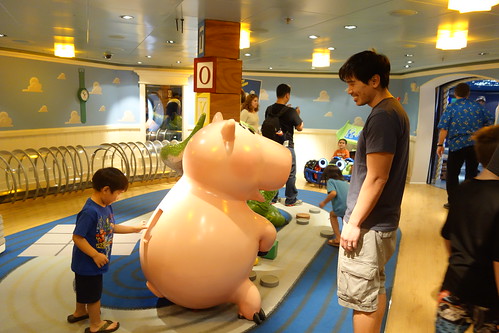 ^^A small section in the Oceaneer Club, Andy's Room!^^

For what it is worth, the kids did LOVE the kids club and always wanted to go. It's open from morning till late at night and you can leave your kids there all day if you like (they even feed the kids there). We received a wristband for each child that checks them into and out of the facilities. Even with a massive number of kids coming and going at all times, security is tight so you won't end up with a missing child or anything :) I have to give credit to DCL for operating it so smoothly.

Every night at 6:15p we enjoyed live entertainment at the Walt Disney Theatre. I can't believe we actually made it to all the shows! It made me feel really good about "getting my money's worth", ha. 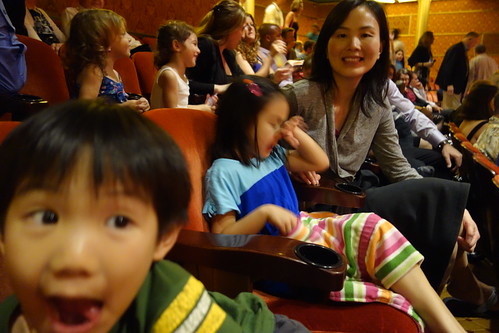 The shows were good, especially the two that weren't entirely Disney focused -- a juggling act by Charles Peachock (from America's Got Talent) and a comedy/magic science show. As for the other Broadway-quality shows, including an Aladdin musical, I did enjoy the singing and dancing to popular Disney songs but they weren't Luke's cup of tea. Again, the kids liked everything. I think they got a great exposure to live performances on the trip.

Besides the live entertainment, we saw The Good Dinosaur at the Buena Vista Theatre. Luke and Will also watched the new Star Wars movie in 3D on the cruise. 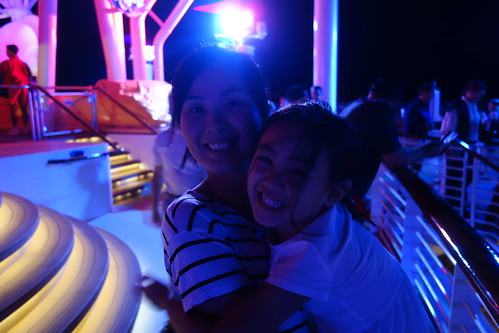 Finally, this is Anna and me on Pirate Night. We were up on the deck for “Pirates in the Caribbean” Deck Party, another singing and dancing show. Eh, that one was just alright. Then later that night at 10:30p, fireworks went off. I remember that we were all ready for bed, but at 10:29p, we ran upstairs in our pajamas to catch the display.

Oh man, we ate way to much on the cruise. And because we ate dinner late, at 8:15p, we went to bed with full tummies every night. So bad! Definitely our unhealthiest vacation yet :( BUT, as far as what we ate, they all tasted very good :) My most favorite was the warm chocolate lava cake with a scoop of vanilla ice cream on Captains Gala night. My mouth is salivating right now thinking about that gooey deliciousness. If you ever find yourself on Disney Fantasy...go for it! 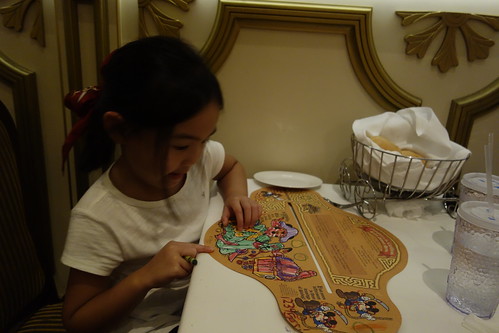 The DCL has an unique approach to dining: Over the seven days of our cruise, we rotated among three themed restaurants, Royal Court, Animator's Palate, and Enchanted Garden. Our severs followed us from restaurant to restaurant each evening, which was nice because eventually they knew our likes and dislikes and we didn't even have to ask for anything. Our head sever was excellent and impressed the kids with his cool magic tricks and awesome napkin folding skills. 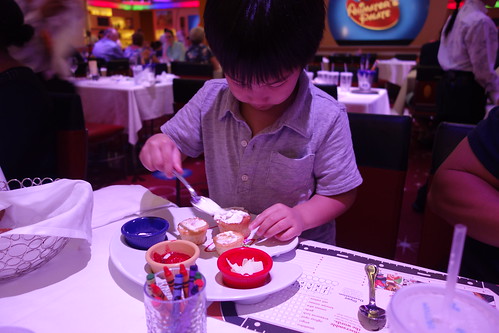 For breakfast and lunch, we ate either at Cabanas (buffet) or Flo's Cafe (fast-food type place serving pizza, burgers, fries, and more), both on Deck 11. The kids had so much pizza, mac n' cheese, fries, and Mickey bars on the trip. 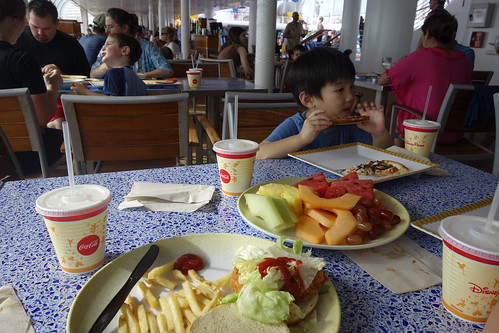 Oh, another honorable mention as far as food goes is the spicy chicken sandwich at Flo's Cafe. SO GOOD. While on the boat, I told Luke that this is what I am going to miss the most. Haha, and it's true, I am definitely missing it!

There are several shops on the Fantasy. My mom gave each kid some vacation money and they used it to buy two lightsabers. 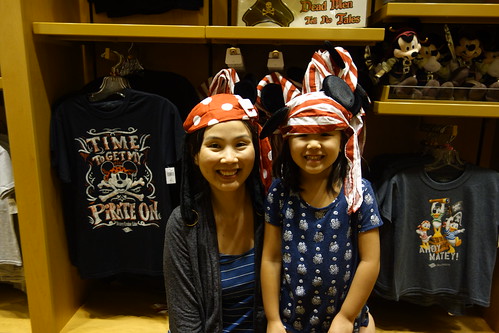 ^^This picture has nothing to do with the said lightsabers, but just for fun.^^

Whew - this post is getting too long. Thanks for making it to the end. 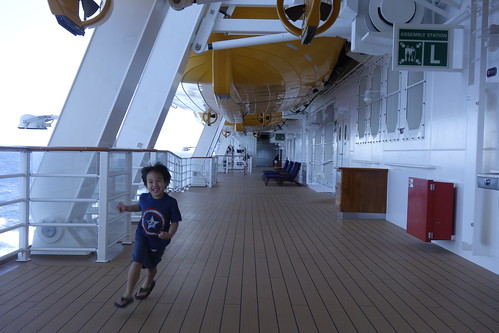