This past weekend we went to the National Museum of American History in DC with the purpose of visiting the newest exhibition, Wegmans Wonderplace. This brand new exhibit, designed for kids 0-6 with hands-on learning opportunities, just opened last month. I had wanted to take the kids there over the winter break, but unfortunately, they were both coughing up a lung so we didn't make it. Now that everyone is (mostly) healthy, it was time to check it out! 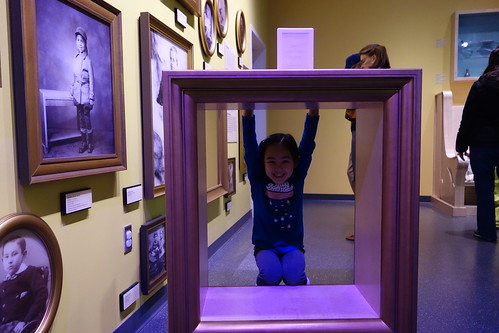 As usual, we got there just when the museum opened at 10a. We always go right on opening time to avoid crowds and to find a parking space.

We (ahem, I) excitedly headed straight to Wegmans Wonderplace and....well, left less than 10 minutes later. Haha. To elaborate, I thought the space was very nice, but small and toddler-ish. There were several different play areas, including a children's kitchen inspired by Julia Child, a tugboat, and a farm stand. There was also a small play structure in the middle for kids to climb. Perfect for little kids, but a bit too babyish for my bigger little kids :) Still, I am sure Anna and Will could have learned something new had we took the time to read the displays, but the place was also just packed with wiggly children and their parents so once the kids said they were done, we left.

Tip for the locals: If you are planning on visiting Wegmans Wonderplace, get there early. The place is popular and you will have to wait outside when it reaches capacity. We got in right away, but when we left, the line was pretty long. If you can swing it, I would go on a weekday. 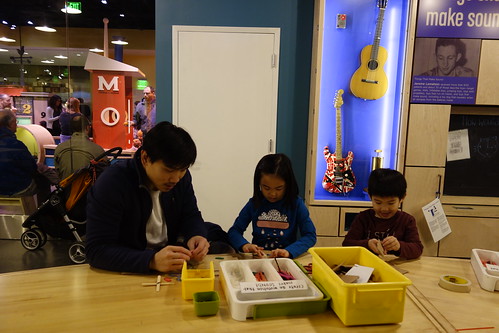 ^^Behind them, through the glass panels, is Wegmans Wonderplace.^^

After leaving Wegmans Wonderplace, we went next door to Spark!Lab, which is another hands-on exhibit for kids. According to the museum website, this space is for older kids (6-12) and the theme changes on a regular basis. Right now, the theme is "Things That Make Sound." Here in the above picture, the kids and Luke were creating an invention that makes sound using the supplies (cardboard, rubber-bands, strings, tape) provided. It was kind of cool and definitely makes you think a lot :) There were several stations, but we only tried a couple. 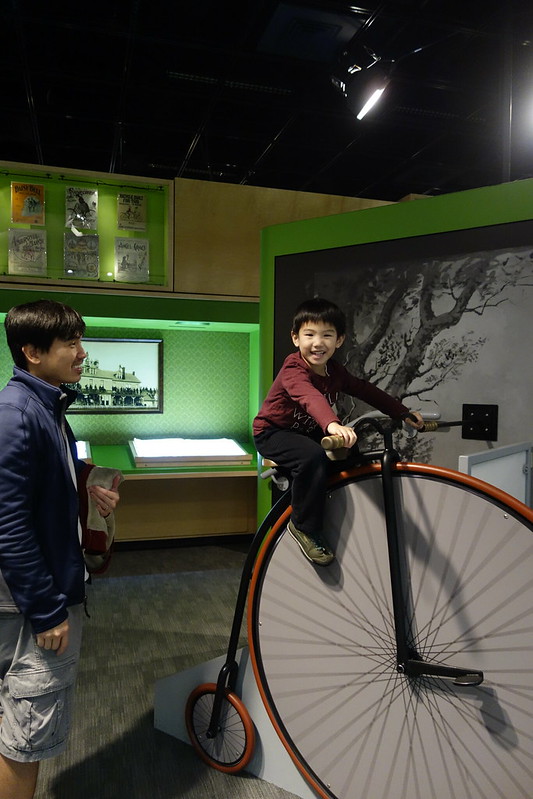 Surprisingly, the museum was very fun for Luke and me. I loved seeing all the neat stuff in Object Project, like an old Mac from the 80's or a monstrous top-loading VHS player. Man, it sure makes me feel old when I can recognize the stuff (some actually used!) on a history museum display! 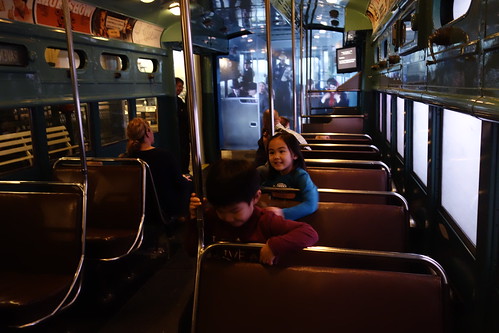 The America on the Move exhibit was also very cool. Near the end there was a Greyhound bus, which Luke explained to the kids that he once traveled from California to Virginia on that bus. "It took a whole week!" I know I am sounding like a broken record, but it was all very interesting and fun. 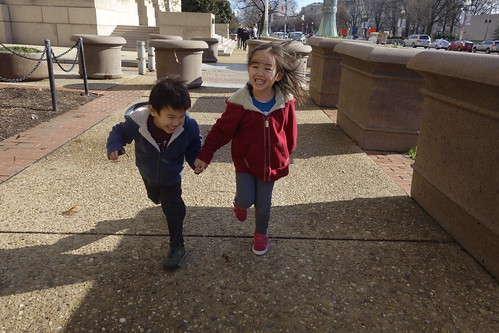 We had a great time and I am really looking forward to going back again in the future. Maybe once the kids are older (and can read), we can slow down instead of rushing through it. Either way, it was time well-spent!
Email Post
Labels: Around DC