How was your weekend? Our was good. After being away last weekend, it was great to just chill at home. Saturday we did the usual stuff...ballet and piano for Anna... and Luke took Will to hit balls at the tennis court. I cooked an elaborate lunch. Hot pot for dinner. Basically spent the day bumming around :) But, on Sunday, we did some holiday-y stuff.

First, we decorated a gingerbread house! We actually bought the kit last year, along with a gingerbread village kit. We built and decorated the village last year, but lost momentum after that so we never opened this house kit. I dug it up from the basement the other day and it made a good lazy Sunday morning activity. 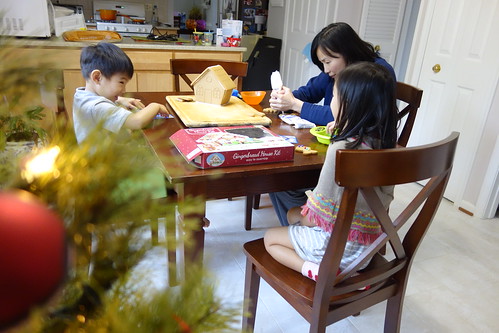 Luke constructed the house and I squeezed the icing, but after that, the kids took over. They went a little nuts with the decorations and I had to bust out the leftover Halloween candies, Skittles and Smarties, so we don't run out. 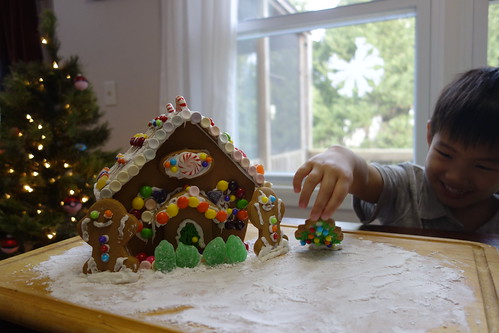 Well, it wasn't a masterpiece, but the kids had fun and it was all their work. I also hardly nagged during the entire process, so that was a big win.

Then it was off to see Santa. This year, I found out that Santa makes appearance at the Freeman Store in the Town of Vienna for F-R-E-E...and it turned out to be a great experience. I hope this is an annual town event because I have decided that this is where we will see Santa from now on. We got there early and walked around the W&OD trail and saw the red caboose. Kind of weird to wear flip flops in the middle of December! 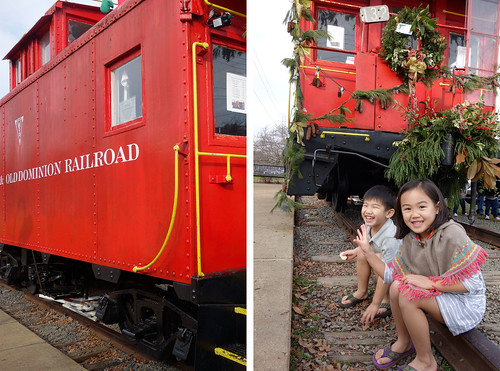 So, the Santa event at the Freeman Store. I am almost hesitant to post about it because it was such a low-key, cozy experience that I don't want it to get too popular in the future. But then again, I am hovering around 5 readers, so I think I am safe :) Anyway, here is the full scoop. Santa was there for 2 hours, from 12-2pm. We arrived at 11:45am and was the 6th family in line. The kids ran around outside in the crazy warm weather and pretty soon it was time to meet Santa. Santa was upstairs and only two families were allowed up there at a time. It was organized and non-stressful. This Santa took time to talk to the kids, so that was really nice. The room was bright (excellent for pictures) and decorated with a pretty Christmas tree. Oh, and the kids got candy canes on the way out. LOVELOVELOVE.

Santa: What would you like for Christmas?
Anna: A Bulbasaur.
Santa: That's a nice present. Anything else?
Anna: That's all...
Santa: Hmm...you don't want much.

Love Anna for her simple request and for wanting so little :)

Will said he wants a "Superman toy." 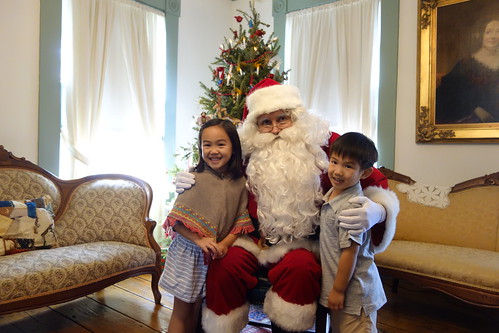 Everyone likes a good "bad" Santa picture, but I really like my good "good" Santa picture. This is the first year that Will was actually willing to participate. I think what helped was that Santa visited his school last Friday for the Christmas party. After seeing his classmates climb onto Santa's lap, he must finally realized that Santa was okay. Either way, I was glad he had that preview because he did wonderful with the Santa at the Freeman Store. Looked a bit unsure, but I still got my picture so I am happy. 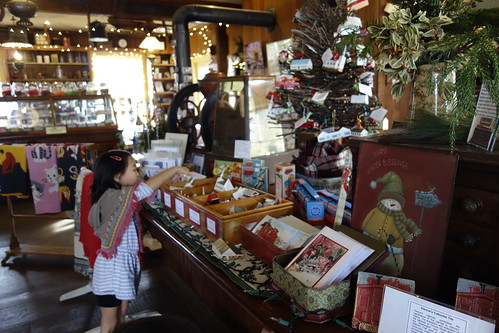 The general store on the first floor was full of trinkets and Town of Vienna things. Lots of neat things to see and browse, but we left before the kids could break anything. 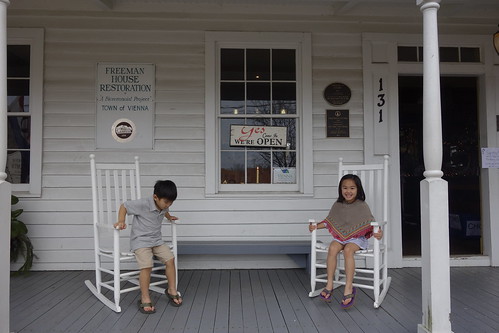 ^^We will return next year! Such a gem!!^^
Email Post
Labels: love