So....a couple days ago, my baby boy turned 4 years old. It happened to be a Sunday so we got to spend the entire day together. First, he woke up to a Pokémon decorated house: 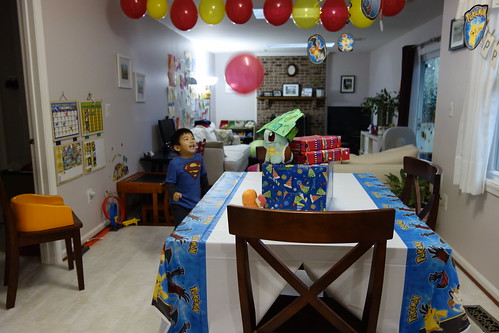 Will doesn't smile easily so it was hard to capture his happiness, but trust me, he was thrilled with the fuss that we made for him.

Then, we did the unthinkable. Yes, we said we would NEVER go again after last year, but I guess the lesson here is never say never. My parents once again treated us to some good old fashioned fun :) Will loved it. A birthday at Chuck E Cheese's is always a win. 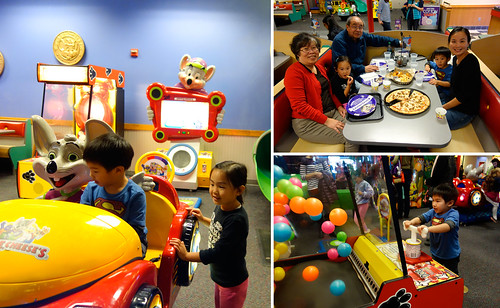 Back at home, here is Will with his awesome Poké Ball cake, aka the best cake ever. 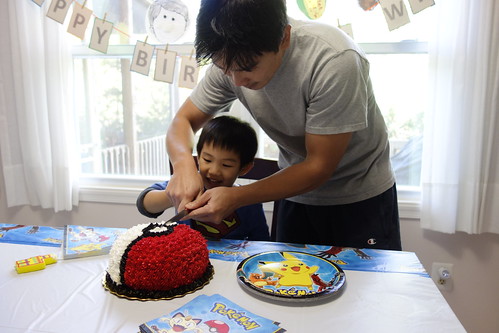 For his birthday dinner, he requested noodles, so we went out for pho.

I can't believe Will is 4 years old. Right now he's still this little bundle of joy who shows affection easily. Every morning, as soon as the clock turns green, he comes over to our bed and squeezes between us with his stuffed animals. He's doing great at school. He eats school lunches and takes naps there and has a bunch of little boys to run around with. I feel that Will is growing up lot faster than Anna. When Anna was 4, she was probably still entrenched in Mickey Mouse Club House, but Will, under the influence of his big sister, is all about Pokémon, which seems more grown up and complex.

Before I used to think that it sucks that Will missed the kindergarten cut-off date by 2 months, but now I am actually happy that he has more time at preschool. I will do anything to keep him little a bit longer.

Will is very concerned about my happiness. I know that won't always be the case so I am loving it right now. He asks, "Mama, are you happy with me?", usually after he did something wrong. He gets super stressed when I say no (and tell him the reason), but as cute as he is, I still have to be the parent. We hug it out pretty quickly though and all is right in the world. He still wants to marry me when he grows up :) 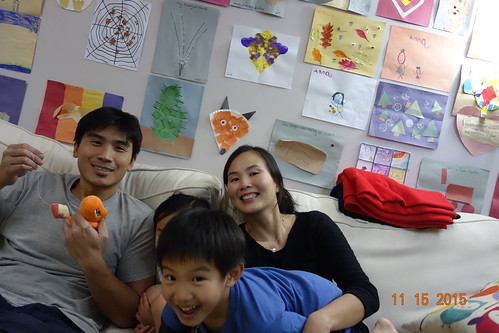 ^^The family on Will's birthday. All I wanted was one good picture, and this was all I got.^^

Anyway! For Will's birthday, we also delivered a dozen of cupcakes to Will's class. I found these Pokémon cake toppers on Amazon. Dang, they were expensive and I mulled over for days and days. Would he even care?? He did :) 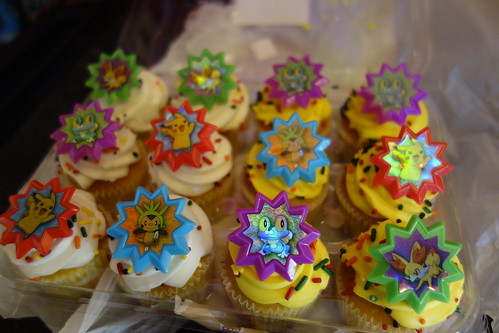 Luke and I were both there for the 5-minute shindig, haha. It was actually very silly. We could have dropped off the cupcakes when we dropped off Will in the morning. But because we didn't trust the teacher to put the toppers on, we both left work in the middle of the day to do this. Sigh, crazy things parents do for their kids... It was all good though. 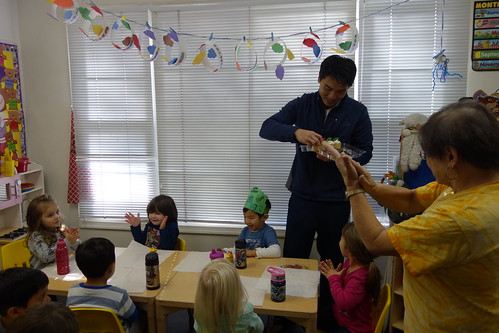