I love the kids, but I am really glad we went to Hawaii without them. Instead, they stayed with their grandparents, probably ate too much sweets and caused a bunch of ruckus, but in the end, we were safely reunited and that was all that mattered. In the future though, we won't leave for such a long time. I am thinking 5 or 6 days max.

Highlight of the things we did in Hilo:

On our first full day on the eastern side of the Big Island, we explored the Volcano National Park. We had been there before in 2007 so it was an old spot for us, but regardless it was exciting to see it again.

After a brief stop at the Visitor Center, we started driving the Chain of Craters Road, which took us down the volcano all the way to sea. The views going down were stunning, as you see newly formed lava fields full of very young land that was created not that long ago. 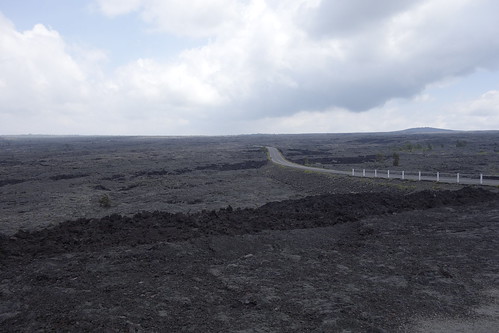 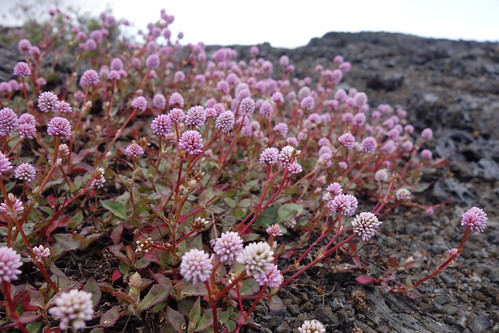 We drove as far as we could go (before the road closed due to lava flow) and saw the Hōlei Sea Arch. 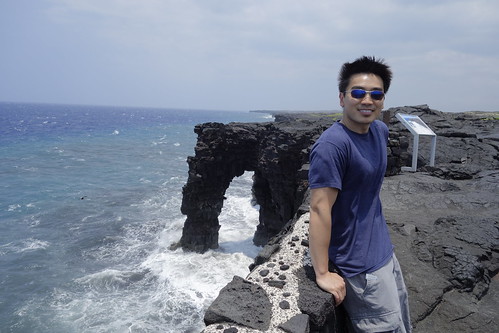 As we walked around the area, Luke went ahead and ignored this sign and posed for a picture with it, haha. 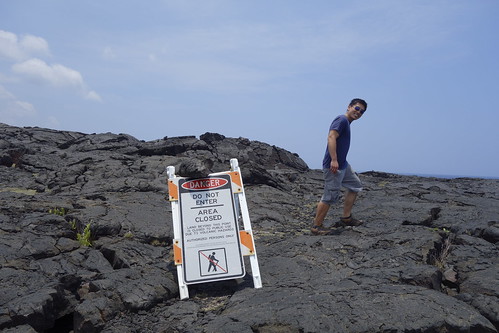 The second drive we did was the Crater Rim Drive, which basically took us around the crater with different vantages of the active volcano. The best viewing spot (where you can find buses of tourists) for the volcano, however, was the Jaggar Museum. Behind Luke, in the picture below, you can see the steam constantly rising from the crater. We really wanted to see the active volcano at night, to see the red glow, but alas, we never made it back. 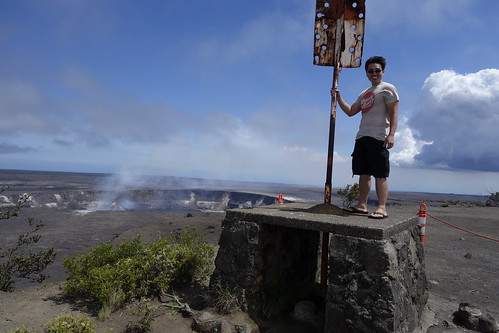 During the entire 4 days that we were on our own on the eastern side, we only sat down to eat at a restaurant once. For the record, it was at a Thai restaurant in the Pahoa Village. The food was great and so was the service. 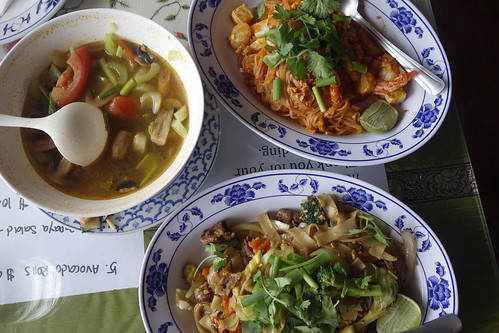 For the rest of the time, we just got food from farmer's markets, grocery stores, and LL Hawaiian (a fast food joint). This is me, just before I dug into the delicious musubi (fried spam with rice wrapped in seaweed) from LL. Yummy! 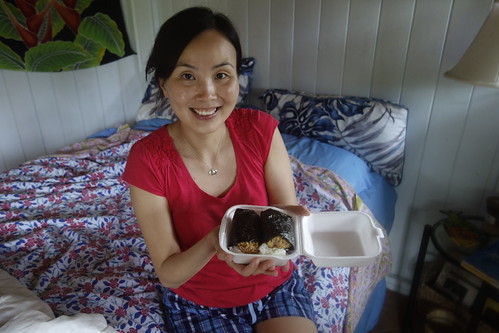 On another day, we visited the Puna Coast and drove what is known as the Road Road. This road followed the rugged coastline, dense tree tunnels, rocky lava fields, tropical rainforests, and black sand beaches. We allotted one full day for this 15-mile drive because we knew we wanted to make stops along the way.

Our first stop was the Lava Tree State Park to see lava molds of tree trunks (exciting stuff!). I don't believe it's a very popular area as we were the only two there, but it was a nice serene walk on paved path. 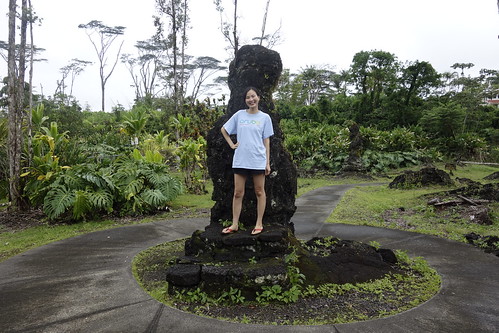 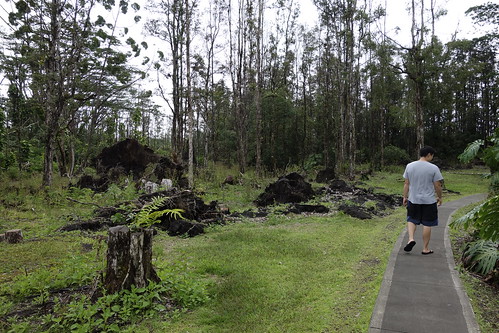 I already blogged about Kapoho tide pools and all the marine life that we saw. The next stop on the Red Road was Ahalanui hot pond. Here we enjoyed a swim in water that was naturally heated. It looked like an outdoor swimming pool, but was actually open to the ocean. A fun little stop for the hubs because he loves to swim. 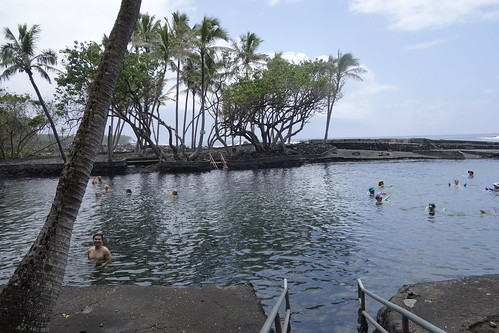 Then we just kept on driving along the coastline, making stops whenever we can and 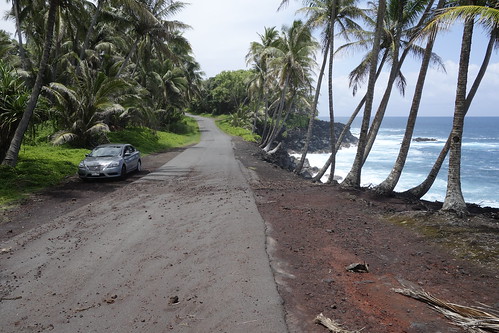 eventually reaching the end of the road. We parked and walked across lava rocks for about 20 minutes to a black sand beach. The beach was small and the waves were way too strong to swim in the ocean, but very beautiful to see! 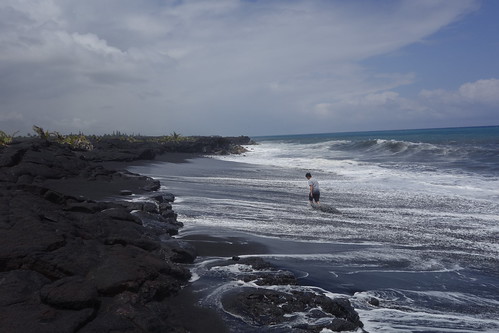 On our last day on the eastern side, we went to search for flowing lava, but that turned out to be an fruitless excursion. We also went to look for turtles, which was a success! Then we walked this trail that led to nowhere (grrrrrr). But what I remembered the most about that day was Luke buying a little yellow orchid from Akatsuka Orchid Gardens, which he's trying to keep it alive at home now, 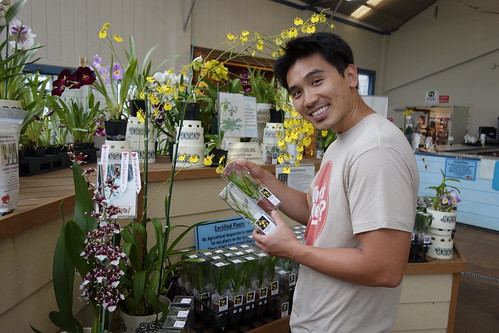 and seeing Rainbow Falls near downtown Hilo. We ended up hiking up the falls and while sitting on top, Luke saw some green swordtail and went gaga over them :) He said that right there was the best moment of the vacation, seeing those guys in the wild. 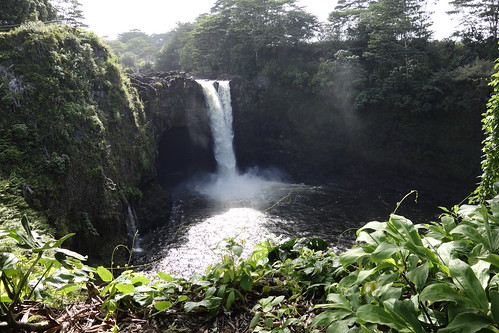 After the falls, I had the best green tea ice cream ever at a little shop in Hilo. Seriously, the. best. ever. 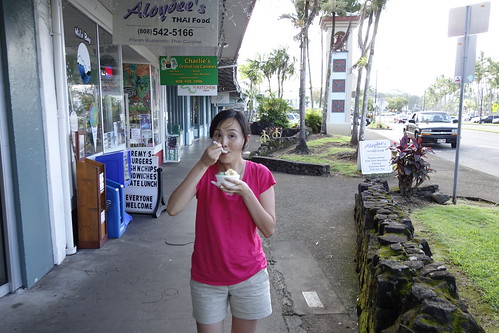 I will write another post detailing our drive from Hilo to Kona next. This post is already too long so I will save that day, which turned out to be pretty great, for later.
Email Post
Labels: Summer 2015 travel