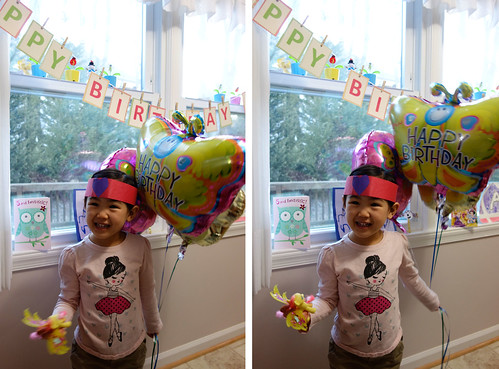 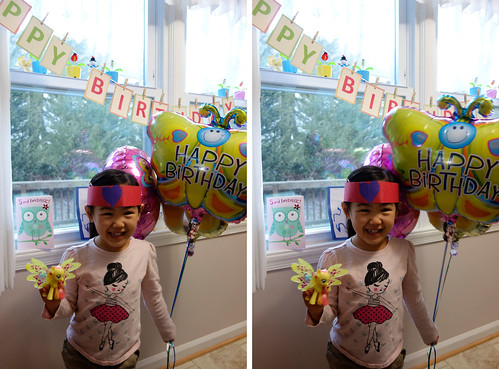 I took these pictures the day before her birthday. It was the morning of a school day. She came downstairs and found balloons tied to her chair, birthday banner hung by the windows, and a present. She let out the biggest smile and was just delighted with everything. I was glad that such small effort on my part brought her big joy :)

For Anna's birthday, I wanted to bring cupcakes (“cupcake” cake, to be exact) to her school for a little celebration, but her teacher told me no cupcakes! It annoyed me because I HAD brought cupcakes to her school before (on Halloween) and they were fine with it. Apparently, they changed that rule due to a girl’s severe nut allergy. Instead, I could only bring Oreo cookies. I thought about protesting….but when I told Anna about it, she didn’t even seem to care so I was like, eh, money saved, no big deal. I did buy the spring edition Oreo with yellow cream instead of plain white, though. She happily took that to school and shared it with everyone. Then we picked her up early from school to go to Great Wolf Lodge and that pretty made her day.

Anna actually requested a birthday party this year and wanted to invite all the girls from her class. I looked into the Little Gym, but all the good dates in March were already taken. So I thought about inviting the girls over for a playdate birthday party. It would just be a little drop-off party… But then I realized that the parents of those girls most likely will want to stick around since they don’t know us enough to just drop off their kids. I didn’t feel like entertaining adults, so we dropped that idea quick. If we didn’t have the GWL trip already planned, I would have tried harder, but because we were going away, I figured it was enough. I told her no party this year, but promised one for her 6th birthday.

So on her birthday weekend, we were at GWL. Read about it here and here.

On the day after her birthday, I conducted a little interview with her. When I asked her, "Who's your best friend?", she responded, "Mama!" I was sure she would pick a random girl name from school, but she didn't! I had a happy moment right then and there.

Now that Anna is getting older, I struggle with what I should share about her on this blog. I realize that sometimes the stories that I find funny, she might find embarrassing in the future when she reads them. I’ve read similar sentiments on many blogs, so nothing is new, but right now I am still figuring out where her privacy ends and my need to share begins. In the meantime, I’ve kept this birthday post pretty neutral, but I will say that at age 5, Anna is awesome. Incredibly frustrating and nonsensical at time, but is also the sweetest and the bestest. We are pleased to have her around here.