Great Wolf Lodge was ok, nothing special. (Part I)

This past Saturday Anna turned 5! I will write a 5 year old update as soon as I get my thoughts together, but today is all about the little trip we took over the weekend to celebrate.

So...Great Wolf Lodge. This place seems to be all the rage. I mean, everyone (friends & coworkers) I talked to all said this place was da bomb. After we came back from Disney World in November, I was itching to put another trip on our calendar so when I saw a great promotion, I ran it by Luke and booked it for Anna’s birthday weekend. In total, we paid $500 for two nights in a standard family suite, with $100 in Bonus Bucks to spend at the resort.

Bottom Line: The kids had fun...just not the kind of fun we wanted them to have. With a giant waterpark in front of them, all Anna wanted to do was swim/soak in the hot tub. Will was more or less the same except he was a little more adventurous. Seriously? Between that and the average accommodation, this place was definitely not "da bomb" I was expecting. At least, not for our family. I mean, if the kids had the time of their lives, then it would be worth it. Expensive still, but worth it. 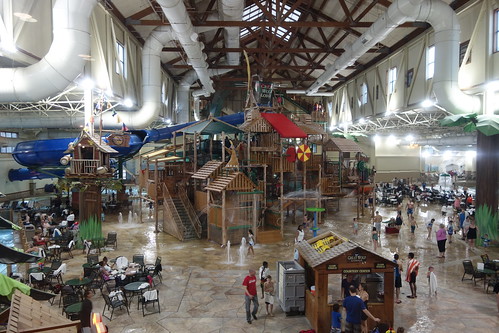 The Details: We picked up Anna early from school on Friday and arrived to GWL (in Williamsburg) at 4pm, right in time for check-in. We quickly changed into our bathing suits and hit the waterpark. We found out that half of the park was closed due to various reasons, so we were forced to join everyone else at the wave pool. That was fine, the kids seemed to like it. After a while, we decided to go to another attraction that was open -- the family hot tub. That was a big mistake because once we introduced that to them, they were reluctant to do anything else. Luke did convince Will to do a tube waterslide with him and they both loved it (I later did it myself and it was really fun, lots of twists and turns). As other attractions opened up, we also did a round in the lazy river as family, but other than that, it was more hot-tubbing.

The next day we did it all over again. Everything was open this time so we told them (Anna specifically) no hot tub until we tried everything else. And they did...but in the end, it was back to the hot tub we went.

In the meantime, Will just wanted to do this the entire time: 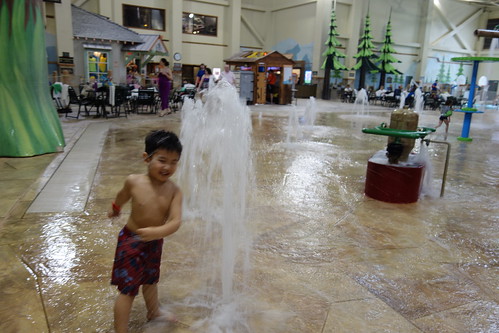 Lesson Learned: I do think GWL is great for kids that are more adventurous (and older?) than mine. It's nice for the parents -- play for 2 or 3 hours and then up to the room to rest -- without having to drive anywhere, to have everything under one roof. However, for my kids? Next time I am taking them to a swimming pool (and hot tub!) at any old hotel, with their floaties. Because that's all they really care about. 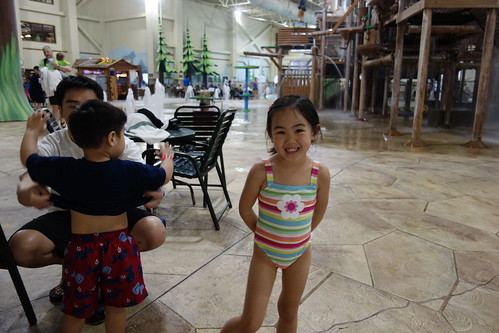 Few more things I want to mention:
1. Guests can use the waterpark anytime between 1pm on the day of check-in until closing on the day of check-out, which is a pretty sweet deal. We didn't take advantage of that, though. We didn't go back to the waterpark on the day we checked out.
2. The waterpark still felt cold to me, even at (supposedly) 84 degrees.
3. For the money, the waterpark really didn't seem that big or special.
4. The resort room was average. The carpet was visibly dirty (also stinky). It was old.
5. The employees didn't always know how to handle Bonus Bucks, so whenever I used them, there was a long (actually, LONG) wait.
6. An overnight trip would be enough, but I still liked our two-night stay so we didn't have driving days back to back.

There are other things to do at GWL beside the waterpark. Tomorrow/this week, I will highlight them all.
Email Post
Labels: Around DC travel Williamsburg