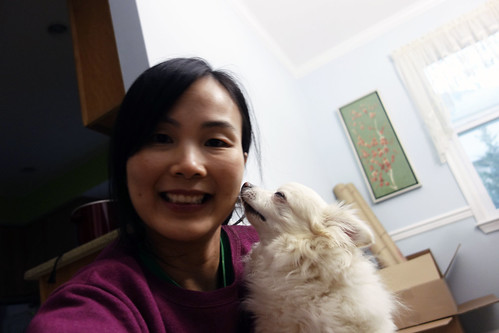 When I casually asked my friend if she wanted Pesto over a girls’ lunch a couple of weeks ago, I didn’t expect her to actually say, “Hmmm….maybe. We can give it a try!” The dog had just pee’d inside the house….on the couch…a few days earlier and we were annoyed to say the least and yet again talking about finding him a new home.

So after my friend talked it over with her husband and agreed to a one-week trial, we packed up Pesto’s few things and drove him over.

The thing about Pesto is that he’s a great dog. If you can tolerate his shedding and occasional accidents, he’s a really fun buddy to have around. So I wasn't TOO surprised when my friend emailed me a few days later saying, “We want to keep Pesto! Thank you, thank you, thank you!”

So just like that, we gave Pesto away. Pretty unexpectedly, but I know for the best.

I know Pesto is in good hands. He has moved in with a loving family with patient parents, two boys, another dog, and other living creatures (turtles, snakes, guinea pigs). This weekend when we dropped off the rest of Pesto’s stuff, my friend assured us that Pesto will be treated like a part of the family…which unfortunately isn't something we could claim we provided for Pesto. Sure we gave him food, water, and shelter, and kept him in a good shape, but beyond that he was sadly on his own. I know some people can seamlessly integrate their dogs into their new lives after having kids, but we just weren't up to that challenge….although I have to say that we gave it our best shot.

If you are a long time reader of this blog, you might remember I wrote about our struggles with the dogs (remember Pargo??) when Anna was only a few months old and just before Will was born. It took almost 5 years, but we are now officially a dog-free home. I am just relieved that even though we couldn't provide our dogs a happy home, we found good people who can.

Because ALL DOGS deserve that.
Email Post
Labels: love the furry ones