I took this picture on the last day of our vacation, on Will's 3rd birthday. We were about to start the drive home, but before that, I found a yellow wall and asked him to, "Smile!" 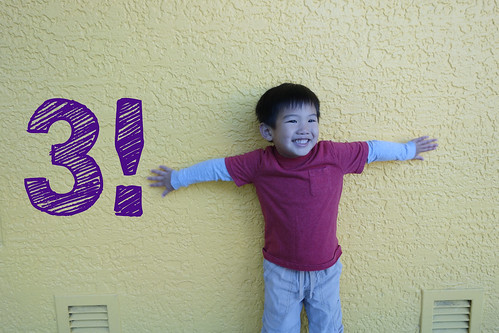 Will faced a lot of changes this year. The biggest being that he went from staying home with Grandma to starting daycare (in March) to starting school (in September). I wasn't prepared for the daycare change, but Will made it so easy for me because he took it all in strides and adjusted so well. He didn't warm up to school as easily. For a while he was so upset when I drop him off at school...he howled and whined and kicked like you won't believe...so the teacher suggested doing curbside drop-off (instead of walking him to the classroom). I took her suggestion and now not even a couple of weeks later, he's completely tear-free! I am thrilled!

Right now, Will's daily weekday schedule looks like this: school from 9am-12pm and daycare from 12:15pm to 4:45pm. I don't like that he has to be at two places every day, but this will last at the most till the summer. Starting in June, the plan for Will is to attend full-day summer camp at Anna's school, which he will continue to attend for the 2015-2016 school year. But in the meantime, Will is learning and thriving and having fun at various places.

Anyway, turning THREE was a very exciting moment for Will. We have been talking about it and celebrating it all month long. On the eve of his birthday, he said, "When I wake up tomorrow, I will be 3." Yep, he got it right exactly.

On his actual birthday, we were just wrapping up our 10-day stint in Orlando and spent much of the day driving toward home. He had Burger King chicken nuggets for lunch and shrimp lo-mein for dinner. Eh, not very healthy. We sang happy birthday altogether in the car at the top of our lungs. He cuddled to sleep that night with hubs (I bunked with Anna) at a Hampton Inn in North Carolina. It was a very uneventful birthday, but he was very happy.

We didn't give Will a party this year, but we did bring cupcakes to his classroom. I found these dinosaur ring toppers online. They were perfect for my dino-loving boy. I also made "Make-Your-Own Dinosaur Fossil" goody bags for his classmates. He helped me package everything.

It was so fun to spend an hour with Will in his school environment. I bet it made him feel really special for us to be there. Luke even read 3 books to the kids and THEY ALL LOVED IT. During our visit, I learned a song that they sing about the weather and now, whenever he will humor me, I love singing it together with him. 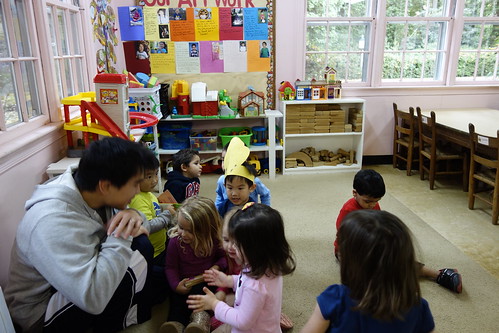 Overall…Will is growing up and becoming his own person, but yet he is still a sweet and caring little kid and always soooo adorable and squeezable. He is super active, super mischievous, super talkative, and super loud. He's my most favorite son ever. And there is not a day that goes by without me telling him that.
Email Post
Labels: baby Willy Wonka