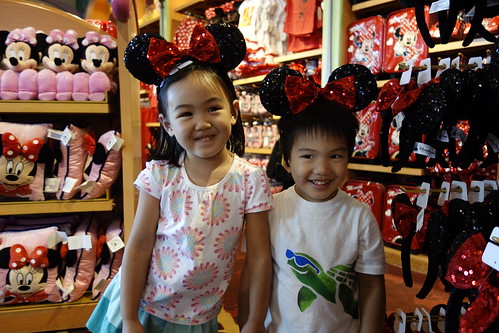 I thought I was going to do several posts to highlight our Disney vacation, but I am feeling lazy so here is a bullet list to sum it all up:

- Also in the future, I think we will skip the Disney Dining Plan promotion. Sure it was nice to have all the food covered, but we ate way too much. We didn't like being tied to dining reservations either -- there were some days where we had to stay in the parks because of them. Instead we will take advantage of other discounts, like room or tickets.

- If you like to know, we spent $2000 on the Disney portion of our vacation. That included the hotel, park tickets, and food. Very affordable, but keep in mind that we stayed at a budget hotel. When we stayed at a Hampton Inn on the drive back home, I exclaimed that the towels here were so thick and so fluffy and the bed was so comfortable. Haha! And this was just a Hampton Inn! So you know that Pop Century definitely wasn't luxurious by any means.

- This was the first time we went to Disney in November and I expected a light(er) crowd, especially given that it was before the Thanksgiving holiday. I was wrong. There were so SO many people. We had to stand in line for everything. Even the PeopleMover had a line! For those who are familiar with that ride, you know that's just plain crazy.

- Having said that, it WAS nice to go to Disney in a different season. In the past, we had always gone in September or October and it was pumpkins everywhere. This time, we saw the parks all decked out in Christmas decor and it was honestly pretty magical :)

THE PARKS, RIDES, AND CHARACTERS

- The kids went on their first roller coaster ride - The Barnstormer. It was great! They both loved it! I just love Disney roller coasters. They don't make me completely nauseous, but still have little thrills here and there. Unfortunately, Will was an inch too short for the Seven Dwarfs Mine Train, but Anna and I went on it and it was excellent ride. However, everything was pale in comparison to It's A Small World. We went on that 3 times. There is something about that ride that captivated them completely.

- Anna wanted to take pictures with anyone and everyone this year. In the end, we got pictures with Minnie, Donald, Goofy, Mickey, Daisy, Rapunzel, Cinderella, Ariel, Aurora, Belle, Pooh, Prince Charming, Lady Tremaine, Anastasia, and Drizella. OH, and ANNA and ELSA. We waited for about an hour and half for the Frozen girls. Still can't believe we did that, but Anna was happy. Will said he wanted pictures with Anna and Elsa too, but at the last minute he copped out.

- He was not into the characters AT ALL, but poor boy couldn't escape Anastasia. The wicked stepsister from Cinderella gave Will his very first kiss from a non-family member. Hehe.

- The day we went to the Animal Kingdom was the worse day for me. I had this terrible headache. We stuck around because we had a lunch reservation. The highlight on this day for the kids was the Kilimanjaro Safaris. Those two laughed and laughed throughout the bumpy ride. Hubs took a video and I need to remember to show it to them. They will love it!

- We went back to Pop Century early that day and the hubs took the kids swimming so I could rest. This was the only time that the kids got to swim during our stay. I went to look for them after my nap and I could hear my kids as soon as I stepped outside. They are loud when they are having fun.

- I just went back through the pictures to help me remember what we did at Epcot. Beside the usual rides, the kids got soaked at a splash pad. It really wasn't a particularly hot day either so I bet people thought we were crazy to let the kids play like that. We had to change them into dry clothes behind a bench. We also ate at a new-to-us restaurant - the San Angel Inn Restaurant in the Mexico Pavilion. Thumbs down on that one.

- Will wore the "Happy Birthday" celebration button during the vacation, which made sense since it was his birthday. Anna, however, picked her buttons based on design. She alternated between "Happy Anniversary" and "Happily Ever After" buttons. What is it with kids and buttons?

- The kids watched so much TV during the trip. Like calories, screen time on vacations don't count right? And they probably ate double their weight in sweets. It's good that we don't vacation often.

- We loved going into the stores and trying on various hats and ears. Speaking of ears, my mom gave the kids $30 of vacation money. Anna spent hers in one fell swoop on a set of pink sparkly Minnie ears. Will got a light-up glow stick, a snow globe, and a little Lotso bear thingy. Kids nowadays are so luckily. When I was little, going on vacations was already enough. We never bought souvenirs!

- This is one of my favorite memories. At check-in, we were given vouchers for 3 refillable mugs. They came in red, blue, green, and purple. Anna got purple, Will picked blue (no yellow available), and I ended up with green. For the entire trip, every time Will saw someone with the same color of mug we have, he pointed and shouted, "Look! Purple cup! Just like yours Anna!" or "Blue cup, just like mine!" And he always ended with a disappointment, "Too bad there is no yellow cup..." So funny, cracked me up every time.

- I want to remember that the kids were so well behaved the entire trip.

- We pushed two strollers around this time. It was no big deal for us the parents and the kids were happy. But hopefully the next time we go back, there will be NO strollers!

- Luke and I have decided no more Disney vacations for a while. While the kids really had a wonderful time, we were kind of meh about it. I think it was mostly due to us being sick, but the waiting in line sucked too. I am sad to say, but maybe Disney is losing its appeal on us.

- Besides, now that Anna will be starting real school next year, I doubt we will be vacationing while school is in session. Even though she goes to school mostly for fun right now, she still missed a lot of work and we are still playing catch up with the worksheets a week and half later. And I can't imagine going to Disney during the summer months (too hot) and the holidays (too expensive).

- So basically, no more Disney in the foreseeable future. But - a big but - we have made that bold statement before and we are known to go to Disney year after year...so I am not making myself accountable ;)
Email Post
Labels: Everything Disney travel