stomach flu, go away, don't come back ever again.

Wow – I did not mean to be away from the blog for more than a week. But I have good reasons. Two Fridays ago Anna woke up in the middle of the night, puking – not once, not twice, but FIVE times – up her entire dinner. I spent that night half-awake, listening for the sound of gagging so I could rush to her room to catch whatever she was throwing up.

For the next few days, she didn't have appetite for anything. I honestly can’t remember what she ate, probably because nothing at all. We kept her from school on Monday and took her to the doctor. The doctor confirmed that she did have a stomach bug but it was working its way out of her system. We sent her back to school on Tuesday. She was still weak, but ok otherwise.

Just as she was getting her strength back, it was my turn. Body aches, chills, nausea, vomiting, the works. It was bad timing because Luke was having a busy week at work and I was basicially solo-parenting. Man, it was ROUGH. He got us take-out food so I didn't have to worry about cooking, but that food actually didn't get touched until he ate it himself days later. I survived on water and toasts because I couldn't stomach anything else.

Shortly after I started my bug, Will got it too. Oh yes, that meant 75% of our household wasn't feeling so hot. Three miserable people in one germ-filled house. Will missed three days of school...but luckily daycare still took him so when I took time off from work to rest myself, I could just curl up in bed instead of taking care of him.

It has taken an entire week for the three of us to feel all better, but just as we thought we were in the clear, Luke started feeling queasy last night. If he follows the exact same pattern as us, he should be better by the end of the week. I am just grateful that this is happening now and not in EXACTLY 9 DAYS when we are off to Disney World. At least timing was on our side. 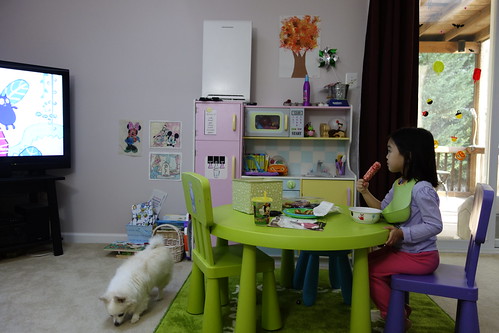 When you are sick in this household, you get Popsicles and TV.
Email Post
Labels: love