Anna and Will, an Update

It’s time for an update on my favorite sibling pair!

I will start with Will.

Will has been attending school for over a month now and things are going great. Sure he has a touch of separation anxiety whenever I drop him off, but at noon when we pick him up, he always says, “I had a great day!” Right now because of our work schedules, my dad picks up Will the most often and takes him to daycare. I am glad that my dad is available to help or else we would never be able to swing this arrangement. As much as I like Will’s school and daycare, I hope once he turns 3, a spot in the 3’s class at Anna school will open up and Will can attend the same school as Anna. That would make my life a lot simpler! But in the meantime, Will is thriving at school and even though he says he doesn't like school, I know he enjoys it. I just love digging through his backpack to find art projects and hearing the songs he sings to himself. It’s so nice for him to be in a more structured environment rather than the homey environment at his daycare.

Will continues to be a mellow little fella who love love loves to snuggle with me. He falls asleep in his own bed, but comes over to sleep between me and the hubs in the middle of the night. This may be a big no-no for some families, but honestly? I kind of love it. He’s my little snuggle buddy and sometimes he wakes me up by laying on top of me and pressing his face against mine. Just this morning he wouldn't get off of me because he wanted to "snuggle with you (me) all day long." Haha, so sweet and funny. He gives kisses and just so darn affectionate. I never expected this from a boy, especially since the girl I have is quite the polar opposite!

Right now, I will say that Will needs a lot of practice in fine motor skills. Even before Anna turned 3, she knew how to hold a pencil correctly and use scissors properly. Will? Not so much. He’s nowhere near knowing how to draw people, he has a hard time peeling stickers, and he has no clue about using glue sticks. But the good thing about having an older sister is that whenever he sees her do doing homework, he is curious about it. And little by little, I am sure he will catch up.

The most notable thing about Will is that he’s almost always happy. The only time he cries is when he’s hurt or when I spank his bum. Being physically hurt and cry is one thing, but I think when I spank him, it’s the emotional hurt that he feels. I’ve mentioned before that Will is a sensitive soul and this is definitely a perfect example. He will cry and cry after a spanking unless we make up (ie. hug it out). He still asks, “Mama, are you happy?” all the time. I’ve learned that he gets really stressed out if I say, “No.” So now I just say, “Yes, I am always happy when I am with you.”

It’s hard believe my boy will be 3 soon. For his birthday, he tells me he wants a dinosaur party and everything yellow. We will probably have a very small gathering for him, filled with all his favorite things, but the biggest celebration of all is that we will be heading to Disney World again right around his birthday! Can’t wait to see how he will enjoy Disney second time around. 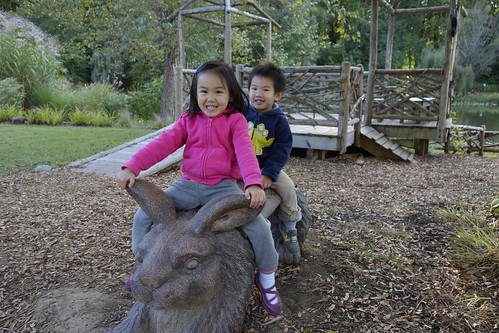 This is turning into a novel so I will keep it short for Anna.

Now that Anna goes to a bigger-kid school, she sputters out all kind of smart stuff, like “It’s fall and winter here, but spring and summer at other places because the Earth rotates around the sun.” Or she suggests that at the dinner table if anyone wants to talk, he/she should raise hand so we don’t talk over each other. She asks intelligence questions, like where we get our food or where do animals go in the winter. She's learning sight words, learning to read ("They want me to read. I don't know how to read, I am only 4!"), and learning to write. It’s such a big difference -- before at her old school, all she ever said was that she “played” and the classroom job she had for the day, but now she has a lot more to share. I love hearing her stories. Beside her core class, she’s also enjoying the extras, like music, computer, tumbling, and ballet. Everything is her favorite.

Of course she still gets a tad upset whenever I drop her off, but I think the intensity of it is definitely a lot lower than before. I just make it quick, “Love you! Have fun!” And whenever I pick her up, she’s always smiling so I take it that it’s all good. We have a parent-teacher meeting coming up and I will learn more about her progress. I am looking forward to hearing what her teachers have to say about her.

Anna just turned 4.5 years old and I think she takes after my introverted personality. She’s happy with just having one friend at school and when I took her to a birthday party a couple of weeks ago, she was perfectly fine with being on her own instead of following the crowd. It was a party at the Little Gym and she wasn't shy about trying new things, but I can tell that Anna dances to the beat of her own drum. She isn't a follower, nor a leader, but she’s just herself. I see a lot of myself in her. When I was little, I was anxious about school, wasn't a social butterfly, and was OK with being alone. But while I was painfully shy and soft-spoken, Anna isn't afraid to speak her mind.

This Sunday we went to Meadowlark Gardens and, while playing at the children's section, other kids came along and they all started conversing. In one instance, an older boy egged Anna to sit on a decorative garden structure, which was very apparent that it was NOT for sitting. When Anna refused, he got on himself to demonstrate. The hubs and I watched the whole thing unfold. Instead of following along, she stood her ground and said, "No, you are not supposed to do that!" and walked away. Luke and I were so proud of her! Then another group of children (siblings I think) came over and wanted Anna and Will to leave where they were sitting. Again, Anna spoke up and eventually the group left them alone. Luke and I were so happy with her that, on the way home, we went to McDonald's for a treat! 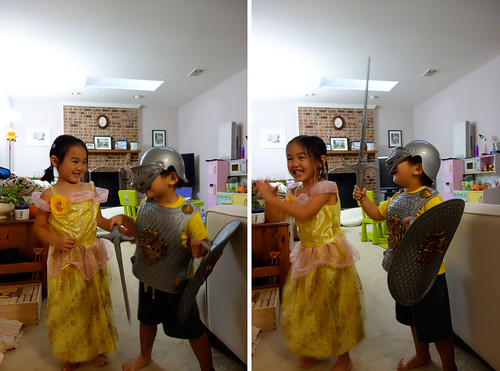 Right now both kids are anticipating Halloween. Will asks, "Are we going to Halloween?" all the time. Haha. We tell him, "Halloween is not a place you go, buddy." They both have their costumes ready and Halloween parade & party at school, which I will surely join them for the festivities. Being a working mom can be downright crazy and tiring and frustrating, but 99.999999% of the time, I wouldn't trade this for anything in the world.
Email Post
Labels: Anna Banana Willy Wonka