Will is hardly potty-trained, but I thought I would write a status update and also to recap the long weekend at the same time.

I am pushing hard to get Will to use the potty because I want him to go to school with Anna starting this September and being potty-trained is a requirement even in the youngest class. He is almost 2 years and 8 months old, which I think is plenty big for a child to get the concept of using the potty. So over the 3 day weekend, we went for it.

In my opinion, there are two methods to do potty training One, wait for him to tell me when he needs to pee or two, take him to the potty every so often (like, every 30 to 45 minutes). I wanted to go for the first method because I THINK it is more effective (you know, to allow him to make mistakes and learn from them), but I knew I couldn't handle the stress of waiting for accidents to happen. So I took the second approach, which was what I did with Anna....and she did learn...eventually.

So Friday morning (Day 1), I put Will in a Pull-Up and took him to the potty every 30 minutes. He pee'd each time. Of course he was reluctant, but M&Ms and Kindle time did the trick. His Pull-Up was dry for at least 2 hours, until he pee'd in it while watching Blue's Clues and had no reaction whatsoever. So then I made a decision to switch him to undies from then on.

The rest of the morning was spent playing outside - with chalk, bubbles, outdoor toys - while asking him constantly if he needed to use the potty but still taking him every 30 to 40 minutes. The weather was so un-July like, it even warranted a light jacket! 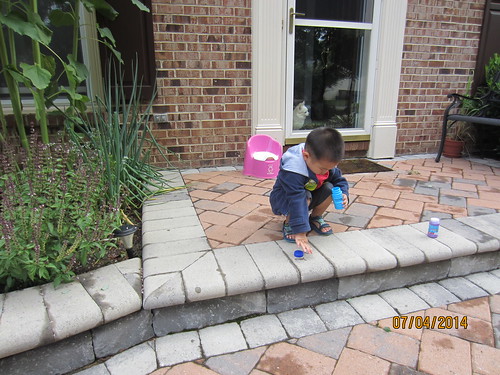 In the evening my parents came over and at night, we had our own little firework display. He only had one accident the whole day. Not bad for Day 1 at all! He also pooped in the potty!

On Saturday (Day 2) we decided to take a very short excursion. We went to a little stream minutes away from our home. Hubs had discovered it while running one day and it was a perfect spot for our little kids. For local folks, the stream is located inside Wildwood Park in Vienna and you can step into the water in various spots throughout the park. The moving water made the stream very clean and I had no reservations in letting the kids frolic in it. 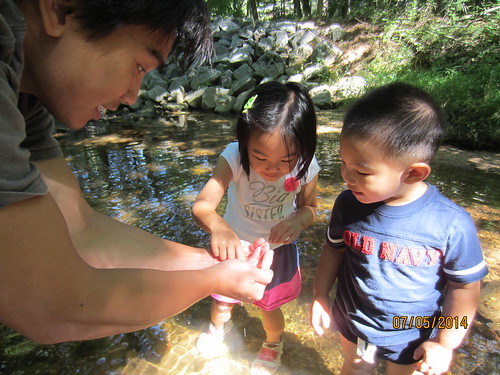 We saw many little creatures, which included a bunch of small fish and dragonflies. In the picture above, hubs caught a tiny fish and the kids were taking turns touching it. I was happy see my kids enjoying nature, although they said they prefer TV over being outside. 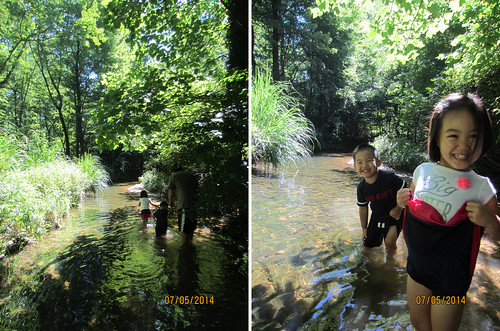 We spent about 45 minutes here and unfortunately, Will had a pee accident.

After we got home and Will took a potty break, we let the kids play outside with the sprinkler. 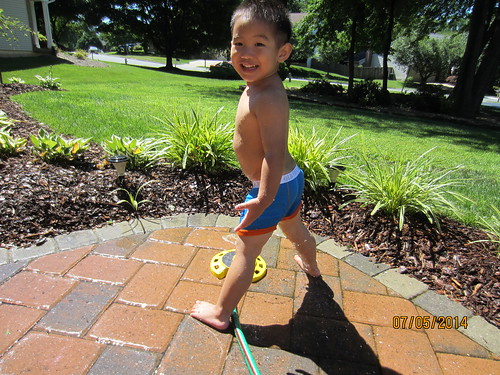 Day 2 ended with two more accidents, but again he pooped in the potty which made me proud :)

Then came Sunday (Day 3). We decided to chance it and took them to Our Special Harbor Spray Park about 25 minutes away. We had gone at the end of last summer and loved it. Don't let the smiles fool you because I don't think the kids *really* had fun this time. There were fun moments, but for the most part it was frustrating because they kept on fighting over the watering can toy that we took along with us. I mean, they had this wonderful facility at their disposal and all they wanted was filling up that stupid watering can and pouring the water out. Whatever, kids. 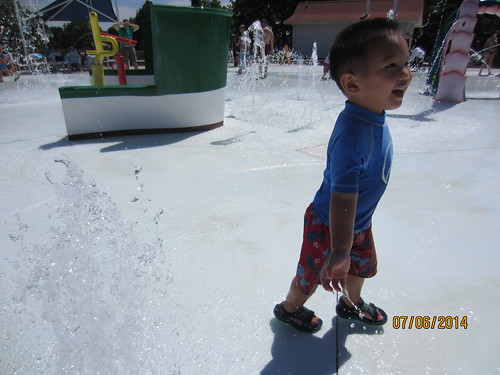 But regardless, more importantly, Will did not have any accidents and he pee'd in the public restroom for the first time! Yes I know it is hard to keep track whether or not he pee'd on himself in a spray park, but he stayed dry on the way down, used the potty twice while there, and stayed dry again on the way home. So I am pretty sure it was a success. 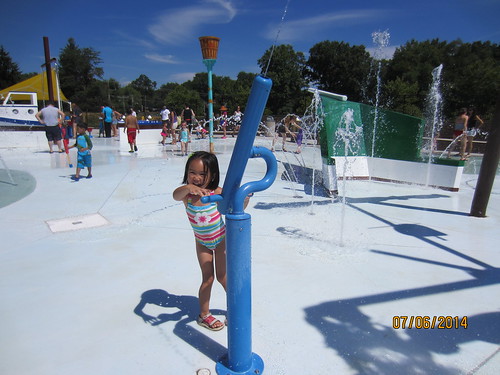 On the 3rd day, with me taking him to the potty every 40-50 minutes, he did not have any accidents.

I don't know how some kids are able to be trained in 3 days because, here we are on Day 6, Will is definitely still learning. Right now he's in underwear at all time during waking hours, but in diapers when sleeping. We still have to take him to the potty rather than him proactively going on his own. The silver lining is that at least accidents are few and far in between so maybe he's at least holding the pee until we take him to potty? In fact, he actually woke up dry this morning after 11 hours of sleep! Either way, I think with still almost 2 months until September, he should make the school deadline with time to spare. Update again next time!
Email Post
Labels: Around DC baby Summer 2014 Willy Wonka