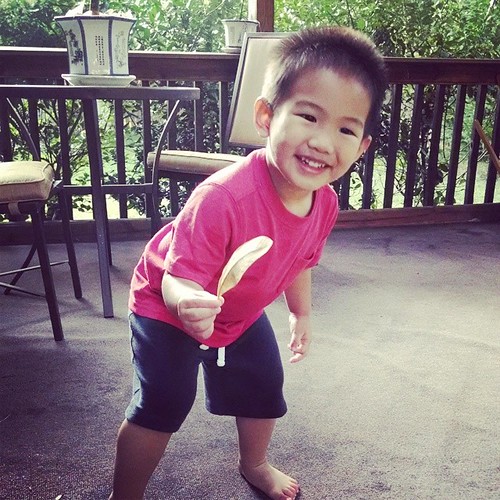 The last time I wrote an update for Will was when he turned two and half so I thought I would do a short update again before he turns 3 in November!

Will is about 33 pounds and at least 3 feet tall? I don’t know the exact measurements, but he’s wearing 3T/4T tops and shorts (his entire wardrobe is from Old Navy) this summer. Yesterday I bought a bunch of new "roll-up" pants for Will for this fall/winter. They are size 4T. I think the waist should be just fine and since they are meant to be rolled up, the length should be okay as well. Will is a solid little guy and still has a very round tummy. I don't expect him to be a lanky teenager when he gets older!

The biggest thing that happened in his life recently is BEING POTTY TRAINED. I still can’t believe how easy the entire process was. He really embraced the potty like a champ and I couldn’t be more proud. Not only he’s daytime trained, but he has been waking up dry for the past few days now. Seriously, pinch me. This kid rocks.

So now that he’s out of diapers, he’s officially going to school this fall. So, so exciting! At first we thought that him and his sister would attend the same school but just last week, a spot opened up at another school and after much thought, we decided to enroll Anna there. It’s going to cause some logistic nightmare, but I believe that the new school will better prep Anna for Kindergarten so we are going for it. As for Will, he will be going to the young 3’s class at Anna's old school (or his new school!) from 9-12 and then daycare in the afternoon.

I hope he enjoys school! I am already looking forward to the stuff he will bring home in his backpack.

I can’t say enough good things about Will’s personality. He is so kind and generous and sweet. The other day he woke up early and was playing with the Kindle on our bed. Later Anna came bouncing by and said, “Will, can I play?” He responded, “Sure Anna!” and scooted over to make room. But because he knew what was going to happen, he followed up with, “Anna, share okay?” Haha, too cute and smart. Then on another occasion, Anna was crying (again) and he tried to console her by opening a photo album to the picture of her and Pooh at Disney World and said, “Anna, see. Happy.” Best brother ever.

Will is very much a boy – he’s all around rambunctious. He falls and trips, but rarely cries unless it really hurts. He’s not picky about clothes and just wants to get dressed as quickly as possible so he can go play.

I am still waiting for the terrible 2’s because it has been non-existent with Will. He rarely gets upset, even when he doesn't get his way. And on those few times when he does cry, he gets over them pretty quickly. He’s just an easy kid overall. I hope I didn't just jinx myself by saying that! I remember with Anna things got really tough the months leading up to her 3’s and continue to be tough even now. I am crossing my fingers that that’s not the case with Will.

But as great as Will is, there are some challenges. Sometimes it’s tough go get Will to listen. I have to repeat myself for the umpteenth time before he listens and do what was told. I get a lot of no’s from him and have to do lots of bribing. He can also be very stubborn. We hardly use strollers anymore, but once he’s tired of walking he wants to be carried and will stand at the same spot until we pick him up. To make sure that he doesn't always get what he wants, we make him walk a few steps more before picking him up and he usually cooperates.

Will’s #1 person is me. Whenever he’s in distress, he runs to me. This summer he has decided that he doesn't like the pool all that much so whenever we are in the water, he wants to cling onto us. But even when hubs promises that he won’t let go, Will still prefers being in my arms instead. I think he just knows that I don’t push him as hard and feels more secure. He also likes to sleep next to me in “mama bed.” Sometimes he will lay on top of me like an infant. Haha, this is probably the reason why I have no baby fever. He’s my own little baby, even though he’s almost 3!

Will likes to be with family. This weekend we went to the park to have a picnic and ride the carousel with a special visitor, baby Andrew (he's 9 months now!). This morning, at breakfast, he was so thoughtful and asked, “When we going to see baby Andrew again?” He also likes it when everyone is happy. He often asks, “You happy mama?” And if I say yes, he smiles so big. 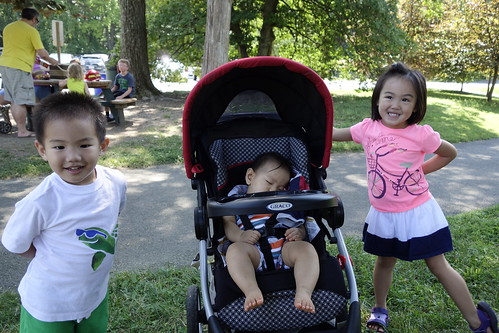 I don’t meant to sound creepy, but I can just watch Will all day long, even when he’s just sleeping. He’s my most favorite boy ever. I cherish his little boy innocence and wish he could stay at this age forever, but time just marches on...