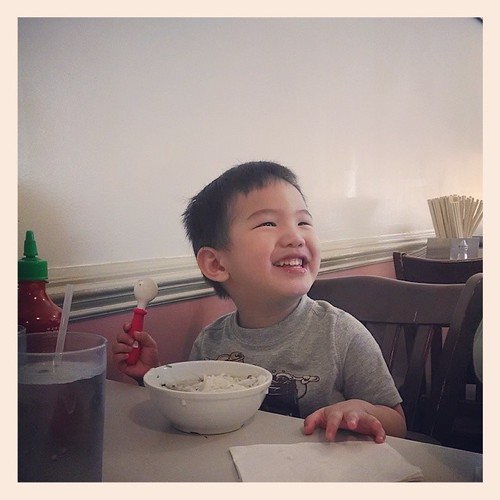 - Will is about to reach another milestone – turning two and HALF!

- For once I am actually early in writing this update, so in no particular order, here are some things I want to remember about him at this stage:

- He is a social creature and loves to be around other people. He shines in public, plays well with other kids, and likes to smile at strangers. I think these are some of his best traits. He’s a level-headed guy for the most part, although he has his own quirks, I honestly do not remember true tantrums from him.

- Will is thoughtful and caring. It warms my heart to see him trying to cheer Anna up whenever she’s down or wanting to share things with her. Sometimes I think HE is the more mature one.

- Will loves Anna something fierce. They love to play together and most of the time it's full of laughter and not so many tears. Putting on shows and dancing together are their favorite activities. It's the best to see my two children get along and LOVE each other a majority of the time.

- He says the sweetest things. Anna is heavy into being Elsa from Frozen right now and often ties a blanket around her neck and pretends that it is a cape. One morning just as he woke up and he saw Anna sitting on the bed with her cape on, he said sleepily, “You are beautiful, Anna.”

- His language has really exploded and he talks to us all day long. Everything is “why?”

- Will is my mama’s boy. He likes to run and shout and play, but at night, he climbs into our bed and snuggles right up next to me, even though there is plenty of space on the other side.

- He knows everyone’s favorite color. But most importantly, I want to remember that his favorite color right now is YELLOW. He already told me he wants a yellow dinosaur birthday party.

- Since my last update on him at 2 years and 2 months old, he went through a very big change – starting daycare! It took him about a week to adjust to the change, but now he loves it. He plays with two little kids right around his age and has a great time. Even though it sucks that Luke’s mom doesn't come to watch the kids anymore, I believe it all worked out for the best. Will is getting the socialization he needs.

- He has been pretty good about using the potty whenever we put him on it. So last Friday, after a successful pee in the potty, I put him in his first underwear ever. Oh my gosh, SO CUTE :) But in under 10 minutes, he went through two pairs of underwear and made a mess on the couch. We will try again when the weather is warm enough for him to play bottomless outside (in our screen-in porch).

- Oh, but I want to remember the fact that whenever he needs to poop, instead of telling us that, he says, “I am going to hide now.” THAT right there is my cue to put him on the potty.

- I really hope he will be potty trained before September so he can start going to school! This fall, he will be 2 years and 10 months old, which is the exact age when Anna started school. My plan is for both kids to go to school in the morning (Mon-Fri, 9-12pm), and then find a half-day in-home daycare or part-time nanny for the afternoon. I wish their current daycare has a half-day option….then all my worries would be solved.

- Will recently attended a 4 year old girl’s birthday party at The Little Gym and he had the best time. He wasn't at all shy or intimated around bigger kids – I was so proud of him and loved every second of watching him play. I think having his sister there helped him loosen up, but in the end, he was bolder and more daring than Anna.

- This last bullet is about me: I am so lucky to be mama to this awesome kid.
Email Post
Labels: baby Willy Wonka