Disney 2009: Celebrating Our Anniversary Day Around the World 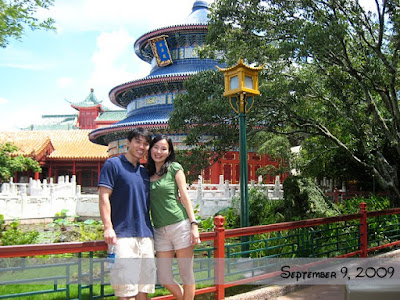 Five months and one day later, I am finally going to finish recapping the Disney trip we took back in September 09. Forgot about the trip already? I almost did too. I had to read here, here, here, and here to catch up.

On the day of our actual anniversary (2 years!), we spent the day traveling around the world. We wandered around the bustling marketplace in Mexico, saw picturesque landscape of a Scandinavian village square in Norway, and posed for pictures in front of Temple of Heaven in China.

After cooling off with some red bean ice cream, we ventured on to the remainder of the countries, strolling through all the trinket shops along the way. We made a point of spending more time at some countries that we usually glanced over, such as Morocco, UK, and France, but realized that there was a reason why we did that to begin with. Not too much to see there. And France really needs to update their prehistoric film. 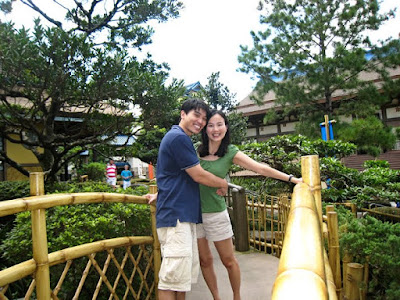 We didn't have any must do's. It was all about spending the day together in a relaxing environment (yes, Disney can be a relaxing place!).

Somehow the day passed us by quickly and already it was time for our dinner reservation. We had the most fabulous steak dinner in Canada. Fabulous!

With that, our Disney trip came to an end. As we left the park that night, an "end of an era" sad feeling washed over us. I was 13-weeks pregnant at that time and we knew that our free spirited ways would soon come to an end. But now at 35-weeks, I am much more optimistic again. I am looking forward to family vacations, either local or exotic, and making new memories! Maybe we will be back to Disney (Disney cruise?) sooner than we thought? :)
Email Post
Labels: Everything Disney travel