And we are back from Disney World!

Hubs disappointed me and only gained 6 pounds, but overall, another tasty trip!

What we put in our tummies:

We started out with dinner at Chefs de France (EPCOT/France). This was probably the worst meal we have ever had at Disney (or anywhere else for that matter). The lobster bisque was disgustingly salty, the salmon was bland and fishy, and beef short ribs were unappetizing. For dessert we ordered crème brulee and puff choux with vanilla ice cream - both were just so-so at best.

I whole-heartily do not recommend this place and would definitely not eat here again. 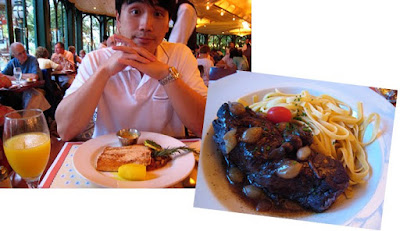 The Crystal Palace (Magic Kingdom) buffet features Winnie the Pooh, Tigger, Eeyore, and Piglet. The restaurant is bright, light filled, and spacious. However, as nice as the atmosphere was, the food options were limited. Even hubs, the least pickiest person I know, couldn't find a whole lot to eat. For me, the saving grace was the beef vegetable soup.

Hubs was all smiles about the dessert, though. 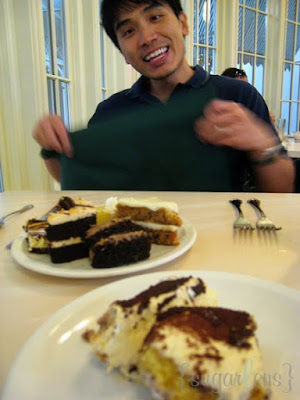 After two bad meals, things began to look up. 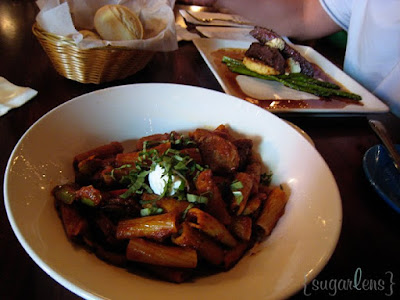 The Tusker House (Animal Kingdom) was a repeat from last year. I think hubs enjoyed it even more this time around. He loved everything, especially the lemon bar! We were stuffed from the buffet until 8pm at night.

We had our anniversary dinner at Le Cellier Steakhouse (EPCOT/Canada) and it was the best meal we've had in a long time! The steaks were tender, juicy, and yummy. Besides the food, the service was also top-notch. We both really liked the place!

Our waitress recommended the filet mignon and that was what I ordered. The steak was served with wild mushroom risotto and butter sauce. Unfortunately, I made the mistake of ordering it medium-well, which turned out to be basicially well-done. Still good, but definitely would had been better if it was a bit pink inside. Hubs had the New York strip steak with potato au graitin. Yum-o! 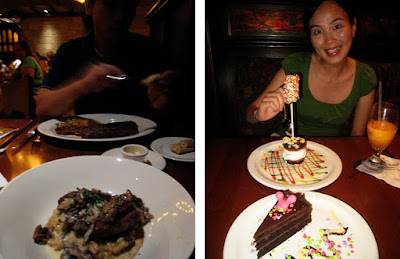 We have been to Disney World four times in the last four years and have ate at a good number of restaurants. I like to try new things so when I made the reservations for this year, I randomly picked a few new restaurants to try. I have to admit that of the new restaurants we tried, I would only return to Le Cellier again.

So there you have it, a little taste of our culinary adventure at Disney!
Email Post
Labels: Everything Disney travel