Maybe it was the economy, maybe it was our good timing, but on the day we went to Animal Kingdom, the park was near empty. Hubs and I had no complaints as we ran straight to DinoLand USA as soon as we went through the turnstiles. First ride - DINOSAUR!

We got on the time rover and blasted back 65 million years to bring back the last iguanodon!

I don't know why a couple of animatronics dinosaurs scared me so much. Pffft. 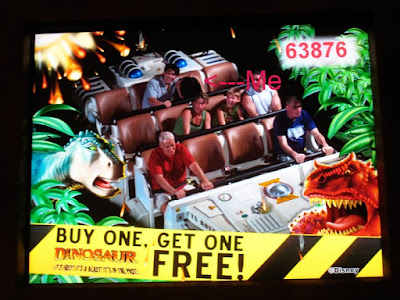 Next, we headed to "Theater in the Wild" for Finding Nemo-The Musical. We arrived 30 minutes early and kept ourselves busy by people-watching and finding Nemo in one of the plastic bubbles on stage. The show? I never did like the puppets, the singing, or the dancing, but hubs (he actually stayed awake this time) enjoyed it so it was all good. We both left the theater with a cramped back, though. The seats were just hideous - not at all contoured.

After the show, we walked through Asia and arrived in Africa for our lunch reservation at Tusker House. Hubs stuffed himself silly with lemon bars and I had fun just watching him eat.

The perfect way to digest all that food was to go on an open-air safari ride through the African savannah and try to spot elephants, tigers, lions, and giraffes roaming free. This ride never gets old for me, especially this time when we saw more animals than ever! We didn't take a single picture as we've been to the savannah countless times. So instead, this time, we just enjoyed the ride and breeze. It was niiiiice.

Looking for a way to cool down, we decided to catch a 3D showing of "It's Tough to be a Bug". Hosted by Flik, we were made honorary insects for 8 minutes. I have to admit that some special effects made me jump - even though, again, I have seen the show, like, a gazillion times. It was still fun.

One thing we had never done, but so glad we caught it this year (at the end of the day too!), was the Flights of Wonder, a show featuring species of free-flying exotic birds. During the show, birds big and small flew inches above our heads. It was so entertaining! I never knew that birds were so smart and trainable and talented. Definitely tops as one of my favorite shows at Disney!

Once the show concluded, hubs and I were pretty much ready to call it a day. However, not without some pictures to document the fact that we were there. So we each got a pop (strawberry for me and pineapple for him) and smiled for the camera. 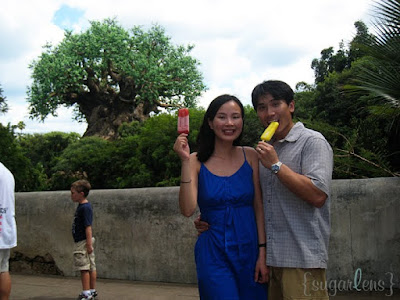 We had a magical day! :)
Email Post
Labels: Everything Disney travel