Day 7: Visited Adare, the Burren, and the Cliffs Of Moher. Stayed in Liscannor.

On Day 7, we started our day early. We decided to go back to Adare, which we missed the previous night due to traffic. Adare is often referred to as Ireland's perfect rustic village and it is definitely not a lie. I am glad hubs convinced me to go back.

Coming straight out of what seems like a storybook, this spot has several thatched cottages, often adorned with colorful, flower-filled window boxes. Some of the cottages now house boutiques selling Irish crafts and antiques, along with a couple of restaurants. *swoon* 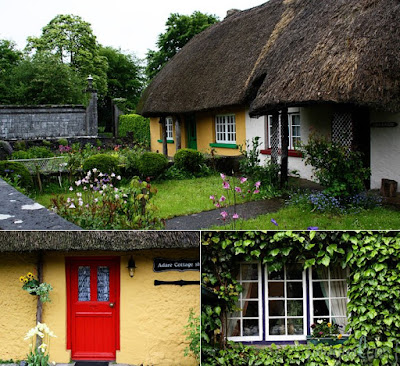 Just as we got there, several tour buses also pulled up. Although the picture below may seem that the village was empty, it wasn't. There were tourists everywhere, all snapping away on their cameras.

This cottage behind me was my favorite, probably the prettiest one of all. 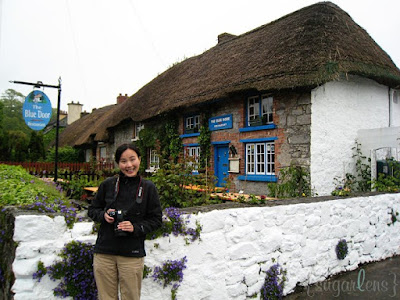 We didn't stay long because it was still early and only the Visitor Center was open. Still, just walking around the village was enough for me. Besides, it was starting to mist.

The plan for the remainder of the day was drive to our B&B in Liscannor, check in, and walk to the Cliffs Of Moher. Cliffs Of Moher is one of Ireland's great natural thrills. The dramatic cliffs sore as high as 650 feet above the Atlantic. It's a sight to see!

We arrived at our B&B early in the day - around 10am. They were still cleaning the rooms and tidying up the place. However, we were greeted warmly by Mary- our host. She brought us tea + kit kat and we relaxed in the lounge.

Later, Mary offered us a ride to the Cliffs. How nice of her! We had planned on walking (about 20 minutes), but this would save us some time. However, she warned us that with the heavy fog, we probably wouldn't see a thing.

Ah, she was right on. We couldn't see anything. Boy, were we disappointed. We even waited in the Visitor Center for about an hour, hoping for the fog to pass. But it never did.

Posing in front of O'Brien's Tower. Picture taken by a couple who was just as disappointed as us. 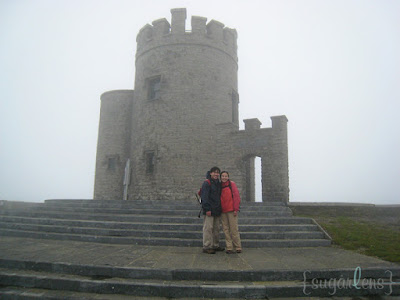 We reluctantly left, but fortunately, since we were staying nearby, we agreed to come back later in the day. We saw many visitors on tour buses who didn't have that luxury to make your own schedule. I guess this is another advantage of traveling on your own. 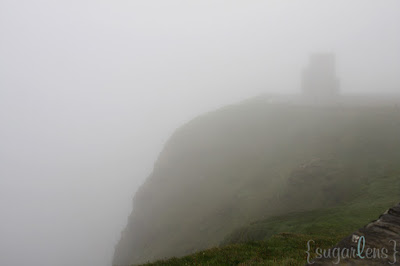 Mary only dropped us off, so hubs and I walked a mile back to the B&B. We then drove about 30 minutes to the Burren, the "rocky place". The Burren reminded me of what I imagine the moon to be like. It's deserted, amazing, and mile upon mile of limestone set as the landscape!

It's hard to imagine that once upon a time, these stonewalls were built by stacking stones one by one. 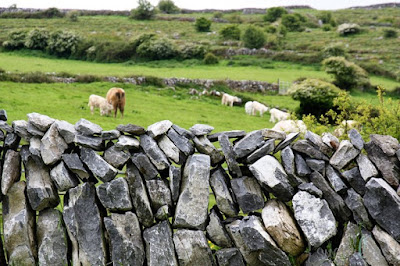 This is the Poulnabrone Dolmen, a portal tomb that looks like a stone table. It is one of the highlights of the Burren. 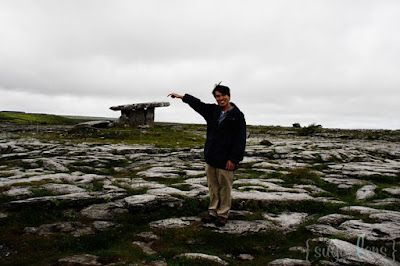 We then pretended to be geologists and walked around. Between all the stones, there were wildflowers everywhere. 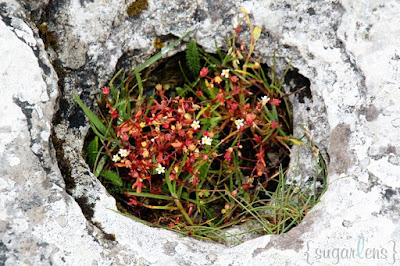 At one point on our journey, we parked the car and walked across this limestone field. Hubs saw a stack of stones and suggested that we each place a stone on top of it to keep it going.

The Burren is so different from the typical Ireland that we know and love. It was a nice change of scenery! 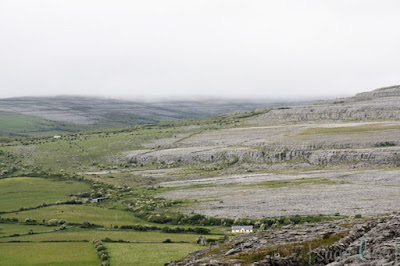 After the Burren, we slowly made our drive back to the B&B. It was around 3pm when we got back and still very foggy. Hubs and I decided to stay in and go back out around 8. Mary had told us earlier in the day that the parking near the Cliffs is 8 euros, but free after 8

At around 5, we couldn't wait around any longer. Although from our window, we still saw fog, we wanted to go out anyway since it was our last day of driving around the countryside. As soon as we got to the main road, we realized the the fog near the Atlantic had cleared significantly. We quickly parked in the parking lot and walked to the Cliffs.

We finally saw the view! Woweeee! 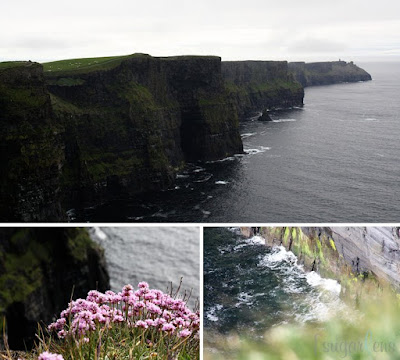 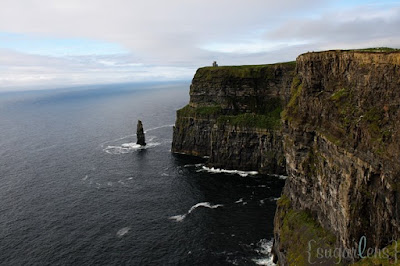 Being the thrill-seekers that we are, we read the warning below and hopped across anyway. Besides, we also saw tons of people doing the same thing. =p According to Rick Steve, wind gusts can be sudden, strong, and fatal. A gust of wind can easily sweep people over the edge (Yes, it has happened before). 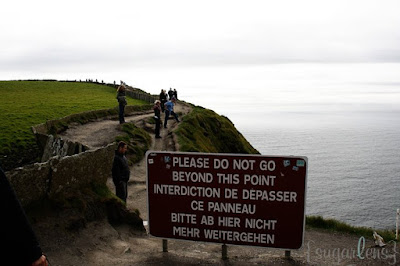 But here, away from the crowd, it was so isolated and the only sounds are the waves, the wind, and the seagulls. 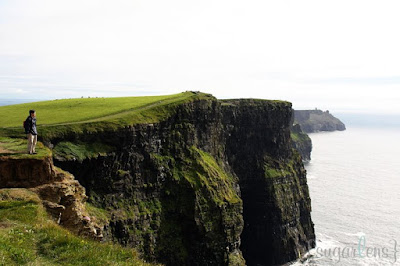 Hubs and I decided to avoid paying the 8 euros and stayed at the Cliffs for nearly 3 hours! It was time well-spent. We didn't have any plans for the night and Liscannor itself is a sleepy little town with not much to do. We took lots and lots of pictures at the Cliffs.

Here we are, our legs dangling over the edge! And as you can see, the fog was starting to roll back in. 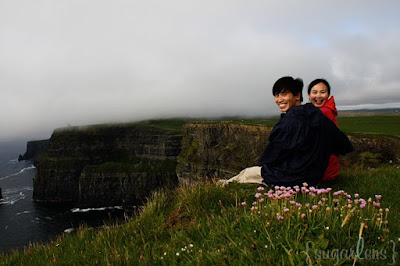 Wherever we go, we like to take ring shots. This is hubs staging the shot with some yellow and purple flowers. 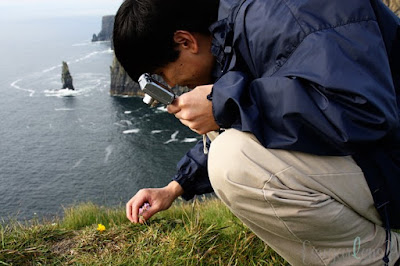 A picture of hubs taking a picture of the rings using the small camera. 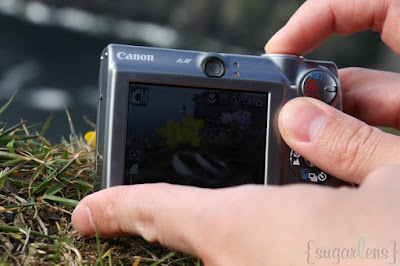 Our big camera lens isn't the greatest when it comes to macro shots, but this one turned out pretty good! 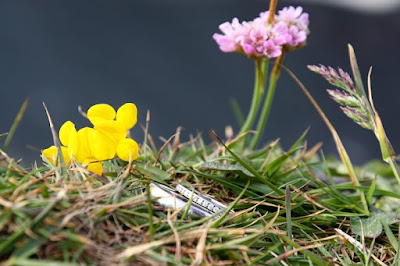 Oh, I am so glad that we didn't wait until 8pm to go back out. Hubs and I are the type who likes to get comfy as soon as we get to hotels - I am sure if we had to wait from 3-8pm in our room, we would have just said, forget it. Also, when we finally left the Cliffs at 8pm, the fog was, once again, very heavy and we could no longer see everything. We timed it just right! 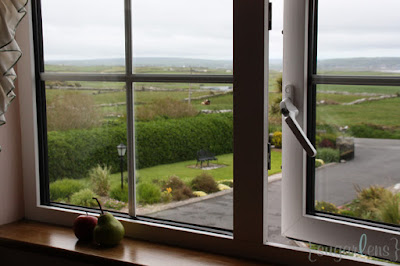 We went back to the B&B with big smiles. Not feeling hungry, I had an apple while hubs had a pear. We packed up our suitcases and got ready for an early departure the next day - we were driving back to Dublin.

Out little tour of the Ireland countryside came to an end that night. And it was, in a word, unforgettable.
Email Post
Labels: travel