@ 12:30pm, I got into a fender bender. The other driver (a teenage girl) just popped out in front of me! I tried to brake, but it was too late. The collision was light and my car was damaged slightly - mainly on the front bumper. The damage on her beemer was minor, too. We exchanged insurance information and went our separate ways.

@ 1:30 pm, I called both insurance companies to report the accident. I repeated over and over again, "I was driving straight and the other driver didn't look before turning left." When I got off the phone with her insurance company, they said an adjuster would be calling me on Monday once they have a chance to talk to the other driver, and let me know what the next steps are.

@ 3:30pm, I received a call from the adjuster. She confirmed that the other driver agreed that it was her fault. We then talked about getting my car fixed - I could either go to a preferred auto body shop or pick one on my own (but it must be looked at by a claims rep first). I picked the latter and made an appointment.

@ 9:00am, hubs and I showed up for the appointment. The claims rep lady was nice and friendly. She took pictures of the car, checked under the hood, and paid special attention to the bumper. After a short 10-minute wait, she handed me a check. She explained that I can take this money to any body shop to get my car fixed. If the cost ends up being higher, the insurance company will work out the difference directly with the body shop. 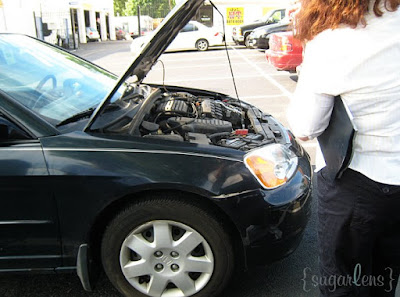 @ 10:01am, pleasantly surprised at the hassle-free process! Getting into minor accidents (as long as it's not my fault) is pretty sweet! ;)

---
Hubs and I decided that we are not going to fix my 2001 Honda Civic for several reasons:

:: It's an 8 year old car with 63,000 miles.
:: Because I never took care of the exterior, the car no longer shines, even after hours of washing and polishing. A brand new shiny bumper would actually look pretty awkward.
:: According to Kelley Blue Book, the car is worth roughly $5,000. It doesn't make sense to me to spend $1,000 to fix something that's only worth $5,000, even if I don't have to pay a dime.
:: As far as we can tell, there is no damage to the car other than the bumper - the light still works and nothing is leaking - so I am not too concerned. It will still pass inspection.
:: $943 is almost exactly how much our annual trip to Disney World will cost us this September.

PS. I am happy to report that my neck is just fine. Not bothering me at all.
Email Post
Labels: love