Ireland: The Day We Drove The Ring Of Kerry

County Kerry is famous for its natural beauty, and the Ring of Kerry (ROK), a 120-mile scenic loop, is the most common tourist route for seeing it. Although our first B&B host advised us against visiting it - said it wasn't worth the drive and Beara Penisula, which we had seen the day before, surpasses ROK by a landslide - we still opted to see it because we simply didn't want to leave Ireland without seeing one of its biggest attractions.

Below is a map of Iveragh Peninsula from Rick Steve's guide book. We started from Kenmare (lower right hand corner) and went clockwise, stopped at Derrynane House, gawked at the magnificent views at the tip, visited Skellig Ring, and drove the northern part of the peninsula rather quickly.

We did not drive the full loop. Right at Killorglin, we followed another road north to Dingle, where we stayed for the night. 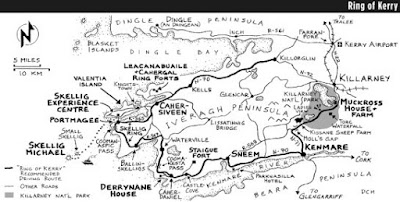 The weather was perfect, probably the best we had during our entire stay in Ireland. Lots of fluffy clouds in the sky and not a drop of rain.

From Kenmare, we quickly reached our first stop - Derrynane House, which is the home of Daniel O' Connell, Ireland's most influential pre-independence politician. Since it is part of the heritage site, we visited the house (which included a drawing room, bedroom, dining room, etc) and watched a video about O'Connell's life. 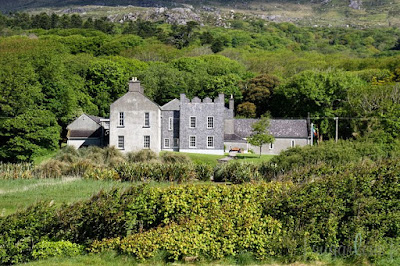 While learning about the history was interesting, we really like the beach and the coastal land surrounding the house. We stayed for a while here - walked around, wrote our names in the sand, and took lots of pictures. 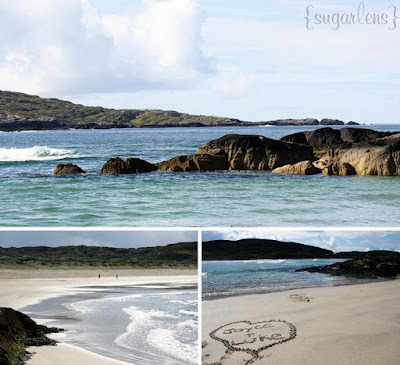 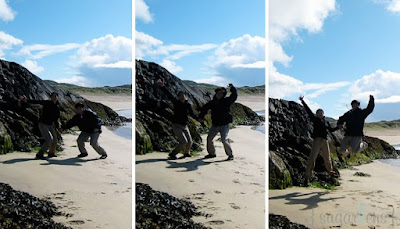 The key to ROK is to get an early start and avoid rush hour. This way, although popular with tourists, it still feels remarkably unspoiled and dramatically isolated.

After Derrynane House and just before Skillig Ring, we saw brilliant views such as this one. Le sigh. 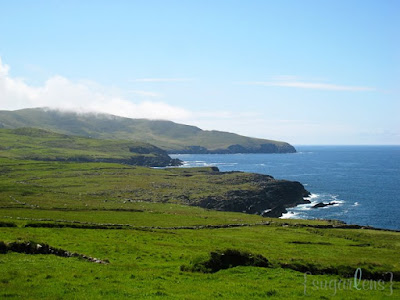 The Skellig Ring, a little 20-mile ring road, is an extension of ROK. As oppose to ROK, The Skellig Ring is a lot calmer because its narrow roads cannot by accessed by tour buses, which makes it a paradise for people traveling on their own, like us. We hardly saw any tourists.

The roads are steep and narrow that driving there is a lot more challenging. 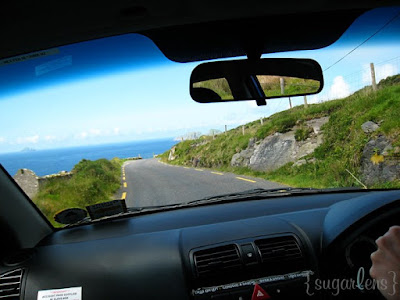 The views are stunning though - rugged coast, jagged rocks, green hills, silver waters of the Atlantic - a truly wild region.

The real reason why we went to Ireland was to see the countryside. And when we finally saw it, we got a little bit carried away with pictures.

I think this looks like something straight out of a storybook. 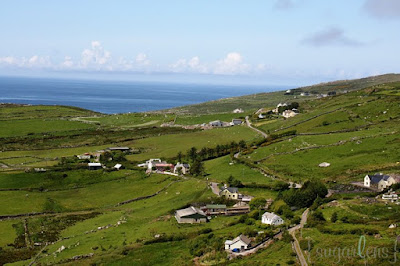 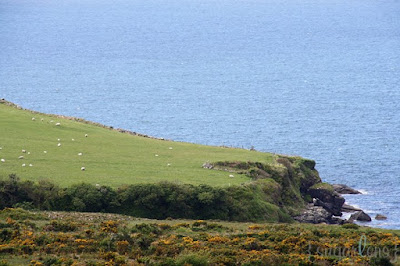 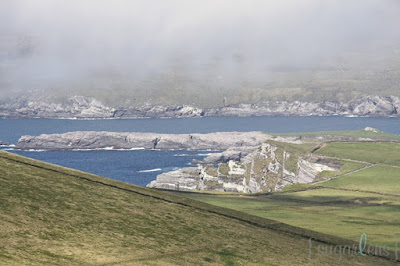 We came to a little picnic-friendly beach and decided to walk around. As soon as we stepped out of the car, these two dogs followed us all the way down to the beach area. At first I thought they just wanted food, but later found out that they were actually protecting us! When we stood on the sand, they would go a couple inches further, lay down, and face toward us. When I tried to get pass by them and go closer to the ocean, they barked at me, as if they were saying that it is too dangerous. Smart and well-trained!

Hubs said that they definitely help their owner herd sheep. 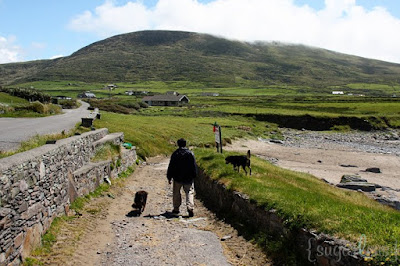 From the mainland, we saw Skellig Michael and Little Skellig, which are two gigantic slate-and sandstone rocks a couple miles offshore. Skellig Michael is more than 700 feet tall and a mile around - you can get there by boats. Little Skellig is home to many wildlife and is protected by law from visitors setting foot onshore. 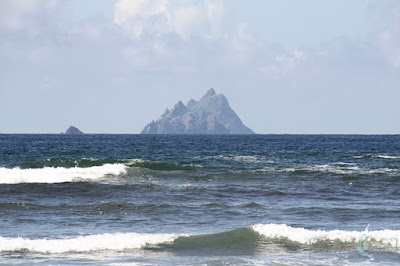 After we left Skellig Ring and joined the main ROK route (N70), we didn't stop for more than once or twice before leaving and starting our drive to Dingle.

All in all, I thought ROK was wonderful!

Once on the Dingle Pininsula, we stopped at Inch Beach, where the movie, Ryan's Daughter, was filmed. Inch Beach is not the typical beach back at home with boardwalk and cotton candy. Instead, it's rural and rich in habitats of plants and animals. It is a 4-mile sandy beach, shaped like a half-moon. 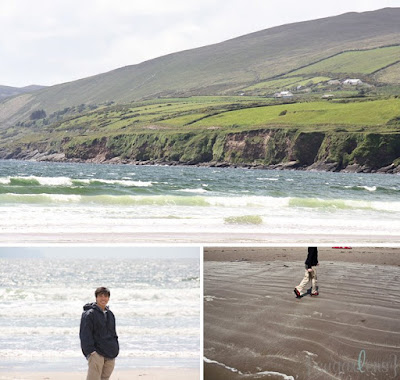 In addition to sand and ocean, we also saw farmland. 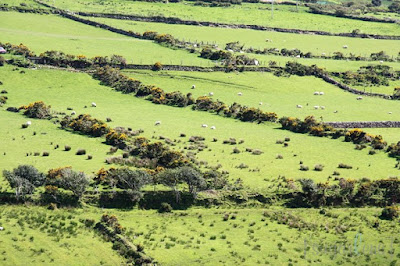 The drive from ROK to Dingle is also very scenic! 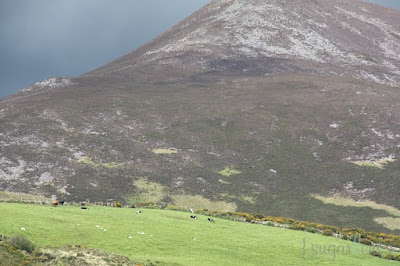 We arrived to our B&B in the town of Dingle and quickly settled in our room. Later after unpacking, we had tea and fruit cake in the sun room. On a random note, I got warm and toasty while sitting there. It really absorb all the sunlight! When we buy a house someday, I want to have a sun room too, just like this one, please. 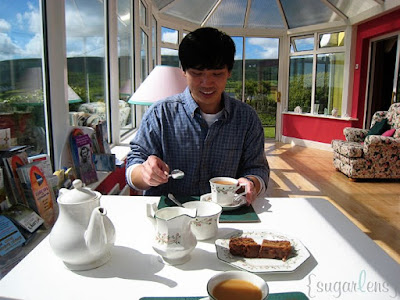 We asked our host for recommendations to a good (and cheap) pub. He said all the pubs are along the street right across from the Dingle Harbor. So off we went to walk around town and find something to eat.

The town of Dingle only has a few streets and they are lined with brightly painted shops and pubs. One thing I noticed about Dingle is that it is very touristy, gift shops after gift shops. It even has a mascot Dolphin named Fungie. Hubs saw on TV that Dingle is the most tourist-friendly with its visitor center taking up one whole block. Dingle used to be very poor, but after made famous by Ryan's Daughter, it is now a boom town. 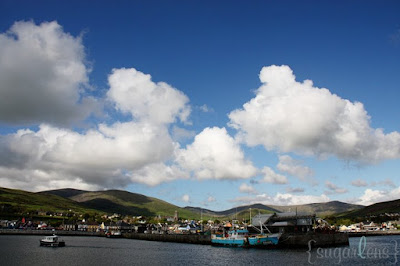 For dinner, we paid an outrageous price for some fish and chips. Rick Steve is right - the only cheap meal in Dingle is picnic. 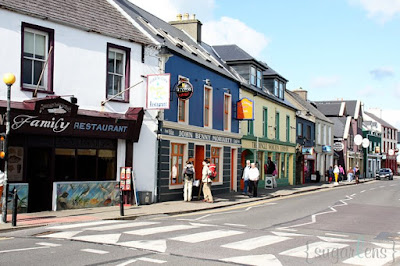 Overall, we didn't like the town of Dingle as much as the other towns. It was fine, though, because we really just wanted to see more countryside.

And on Day 6, we did just that. Coming up next: we saw the most western part of Ireland and changed our itinerary at the last minute!