Ireland: The Day We Drove The Dingle Peninsula

Originally we planned to stay in Dingle for two nights, but because we were highly unimpressed with the town and since the Dingle Peninsula loop can easily be driven in a couple of hours, we decided to cut our stay short. Our B&B host was understanding and had no problems with us leaving early.

Our agenda for Day 6 was to drive the Dingle Peninsula loop (and Connor Pass) in the morning, head to Killarney National Park (for the second time), and then drive in the direction of Cliffs Of Moher. We didn't have a B&B reservation for that night, so the plan was to stop and look for a B&B whenever we get tired. 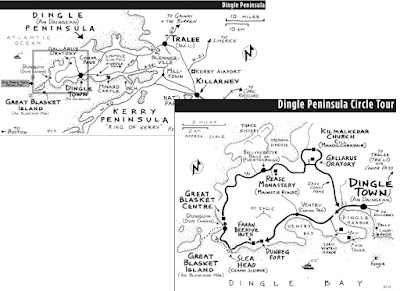 After breakfast, we packed up our belongings and checked out. First stop, Connor Pass! Connor Pass (not part of the loop) is one of the scenic highlights on Dingle Peninsula and the highest mountain pass in Ireland. This narrow mountain-road goes from the town of Dingle to the northern part of the peninsula.

We did not drive the entire stretch because it didn't make logical sense. Once we reached the lookout point, we drove the same way back.

At the lookout point, the panorama is simply overwhelming. It was cold and windy, though. Check out our crazy hair. :) 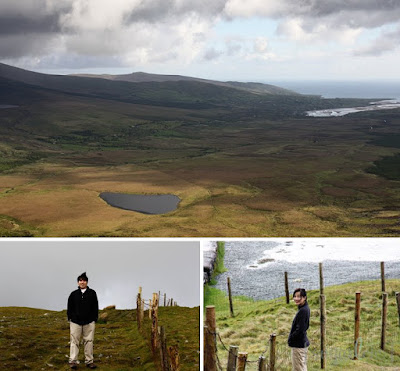 We got caught in a rain storm while on top of the mountain, but once the rain passed, the sun came out and it didn't rain again for the remainder of the day.

This is the view on the other side of the road - of the town of Dingle. 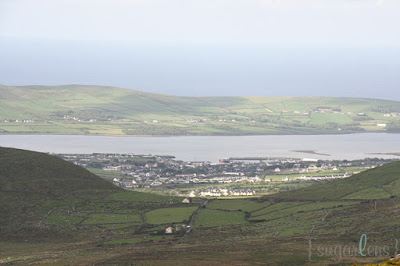 Once we left Connor Pass, it was time to start the Dingle Peninsula loop trip. The trip is about 30 miles long.

The weather on this distant tip of Ireland is often misty, foggy, and rainy. But again, hubs and I totally lucked out. It was another gorgeous day!

We drove along the coastline. The landscape is wild and beautiful! 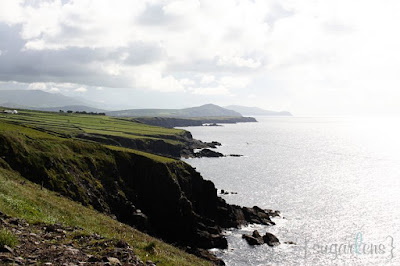 Hubs decided to be adventurous and went down one of the cliffs. I have, like, about 10 pictures of him walking down and coming back up. 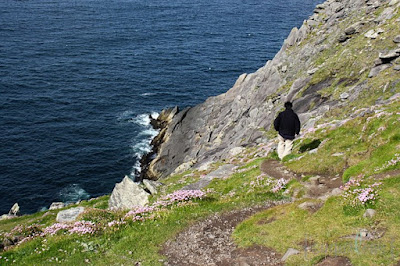 The road is often one-lane with lookout points and enough space to park a couple of cars. There wasn't a crowd so we never had any issues with not having a space to park. We pulled over whenever we wanted. Sometimes we walked a bit, but other times, we just took a few pictures and left. 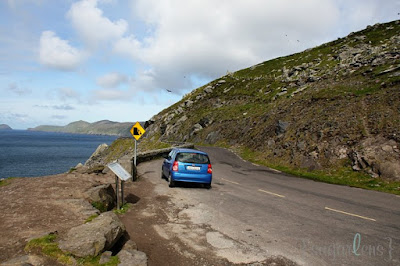 The land eventually breaks into a scattering of dramatic rocky hills, long sandy beaches, and staggering cliff edges alternating around the coast. 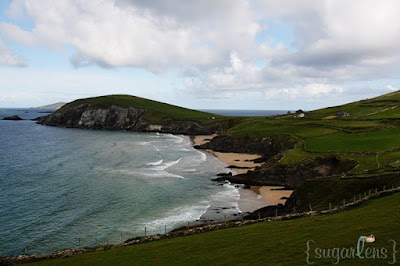 Somewhere around the loop is Slea Head, the point in Europe closest to America. It offers smashing views of black-rock cliffs. I know we drove it, but I can't really pinpoint where the location is exactly. A lot of times, all the attractions just sort of run one after another, and it was hard to keep 'em all straight. This picture below looks like it may be it, though. 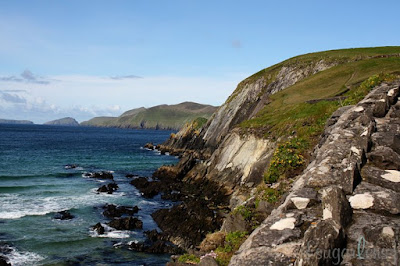 I can't decide whether or not I like water view better or green landscapes. Mmmm...I think both. 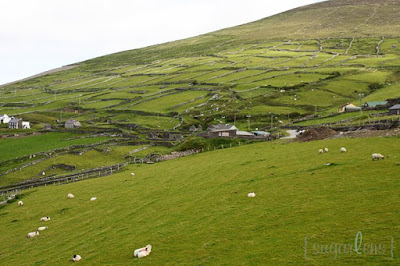 I like this picture. A lot. Even though you can't see much of hubs, the scenery and the vibe is amazing. 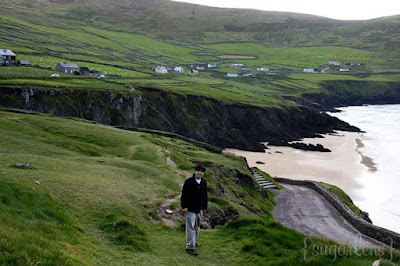 Along the way, we saw many farmhouses and sheep. They are 500,000 sheep on the Dingle Peninsula. Far more than the 10,000 residents living in Dingle (both town and the peninsula). 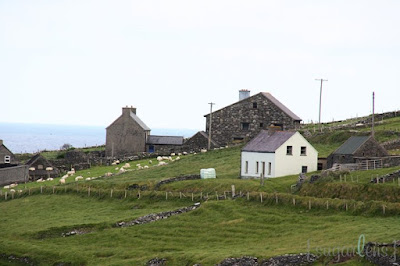 Rick Steve wrote in his book that the, "peninsula is an open-air museum. It's littered with monuments reminding visitors that the town has been the choice of Bronze Age settlers, Dark Age monks, English landlords, and Hollywood directors." Since we were a lot more interested in nature, we didn't visit any ruins while driving the loop.

If we go back to Ireland someday, I hope to visit them. Although we said that we didn't like the town of Dingle, we really like the Dingle Peninsula loop. There are a couple of B&Bs on the loop and hubs said that he could easily stay there and enjoy "pure ireland" for a couple of days. 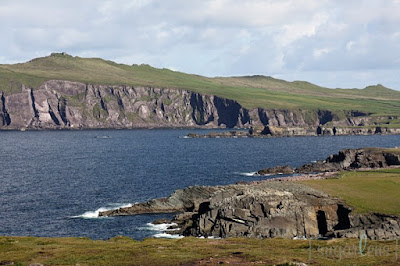 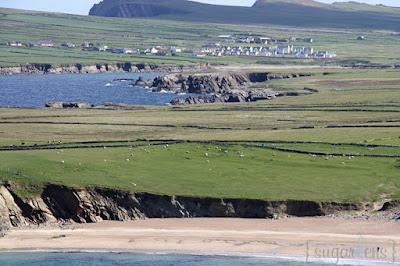 Overall, along with Beara and Iveragh, I really enjoyed Dingle!

We decided to go back to Killarney National Park, even though we were just there two days ago. I mentioned that Day 4 was particularly stressful for us because of our little car incidents. So to be perfectly honest, it wasn't a happy day for us. When we got to Killarney National Park that day, we quickly went to the Torc Waterfall and the Mockross House and called it a day. We felt that we didn't see the park as much as we could and should have.

So on Day 6, we wanted to go back. And because we cut our stay at Dingle short, we were able to.

It turned out that we really didn't miss much at all. I mean, I am sure the park offers lots of great things, but for what we wanted to see, we saw it all on the first visit.

Regardless, hubs suggested walking the trail that goes around Mockross Lake. Goodness, I had a déjà vu. Although not nearly as strenuous as that hike at Glendalough, it took just as long, if not longer. We walked for hours and hours. 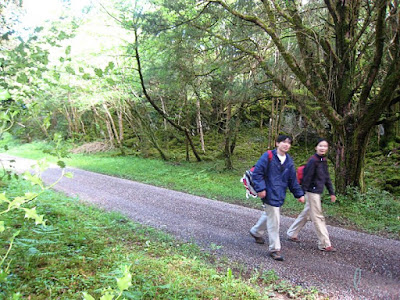 The scenery? Eh, I have seen better. I kept on telling hubs that we could've done this back home at Burke Lake. :)

We took pictures along the way. 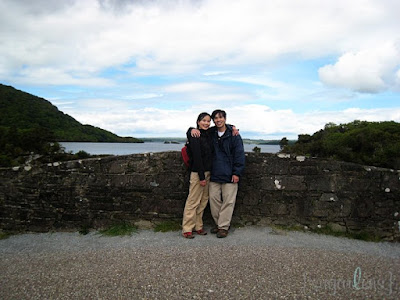 The trail is mostly flat surface, but the long walk still wore me out. Here I am, catching my breath. 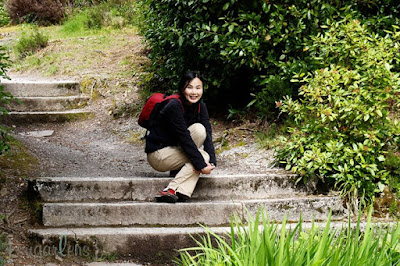 We finished the trail and went back to Torc Waterfall. Hubs actually climbed the steps near the waterfall this time - I stayed behind because I was just too exhausted. Luckily, he said I didn't miss much.

(I should also mention that before we drove into the park, we passed by the town of Killarney. A lot of visitors stay in Killarney because of its proximity to Ring Of Kerry and the national park. After passing through it, I can honestly recommend making nearby Kenmare as home base instead. It's much better - quieter, cozier, and prettier!)

After the park, we wanted to go to Adare, which I read is "Ireland's prettiest village". The plan was also to stay there for a night before driving to the Cliffs Of Moher the next day. I don't know why, but it was a traffic nightmare when we got close to Adare. We drove right into town, looking left and right for B&B signs. We didn't see any and made our way out of the town with every intention to go back to take a closer look. Unfortunately, the heavy traffic made it impossible so we just kept on driving.

Eventually, we ended up in Limerick. We saw a couple of B&Bs on the side of the road and knocked on one. They happened to have a room available,* but wanted 35 euros per person. Hubs negotiated it down to 30 eruos. Yay!

Once we got inside the room, we didn't leave again. We had bought some groceries from the market earlier that day and had a couple of sandwiches for dinner. I don't remember what else we did that night - my guess is that we went to sleep early. We were getting up extra early the next morning to see the Cliffs!

* While on the trip, we realized that we really didn't have to make advance B&B reservations back home. High season in Ireland doesn't start until July and when we went in May, there were hardly any tourists. Not having any reservations would definitely offer a lot more flexibility. But then again, it was also nice to not have to look for a place to stay every night.