Ireland: A Day Of Incredible Views

The B&B we stayed at in Kenmare was by far hubs favorite. Why? The breakfast! Just look at our typical breakfast plate. They really piled on the food. 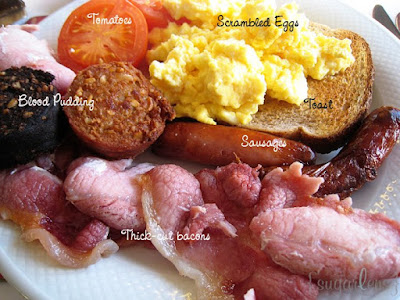 Over breakfast on Day 4, we talked with a friendly old couple about our plans for the day. Upon hearing that we were driving the Beara Peninsula, they immediately told us not to miss Lake Cloonee. They were just there the day before and hiked to a waterfall.

We duly noted and agreed that we would go there too.

Lake Cloonee happened to be our first stop on the loop (R571), coming from Kenmare. We actually missed the sign first, but turned around and went down this narrow path. Along the way, we got close and personal with farm animals - I had hubs stop every other minute to take pictures. 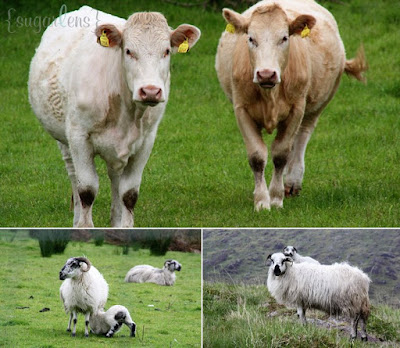 After a while, the path opened up and we saw this glistening lake. We were literally the only ones there! It was very picturesque and I felt tiny and insignificant standing in the vast valley. We walked around for a bit and took pictures. It was cloudy so the pictures came out dark, but what a great atmosphere! We saw the waterfall from afar, but decided not to go, as we had a long day ahead of us. 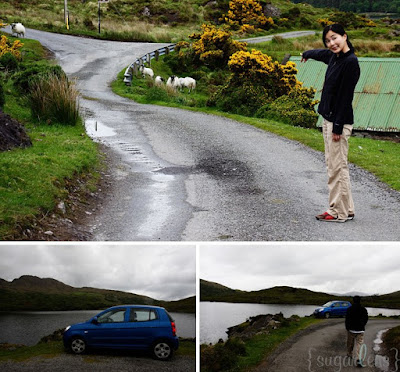 The tour books don't really talk about Beara Peninsula - it is definitely the least famous among Iveragh and Dingle. But when we heard that it is actually the most popular with the locals, we grew most interested in Beara. It certainly has a more local vibe. First of all, we didn't see a single tour bus. Secondly, we didn't pass more than a handful of cars the entire time we were there. Everywhere we looked, we were awarded with unspoiled and magnificent landscape.

It is safe to say that Beara Peninsula has not been discovered by mainstream tourism and retains a true Irish rural charm. I give it two thumbs up!

We didn't drive the entire loop, though. Instead, we cut across and drove the Healy Pass (R574), which is actually the most well-known scenic drive as far as Beara Peninsula is concerned.

We, once again, got lucky with weather. Although the sun didn't come out, the rain didn't either. We were able to see clear mountain tops and green farmland.

The Healy Pass is spectacular! I will let the pictures speak for themselves. 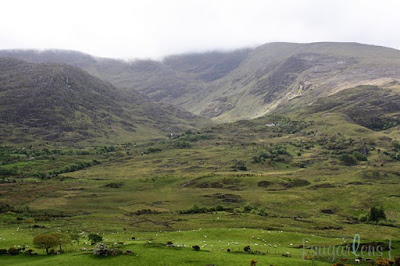 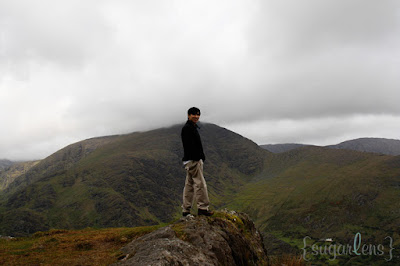 Glanmore Lake, taken from the summit of the Healy Pass. 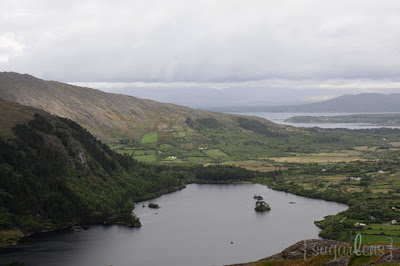 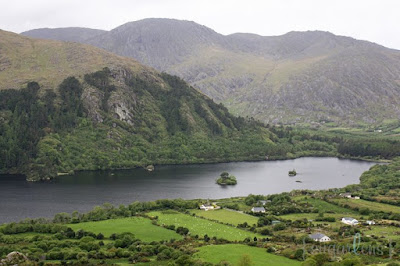 The road is windy and we even shared it with herds of sheep, walking on the side of the road. They were so close that I could probably reach out of the window and touch their fur. What a fun adventure. 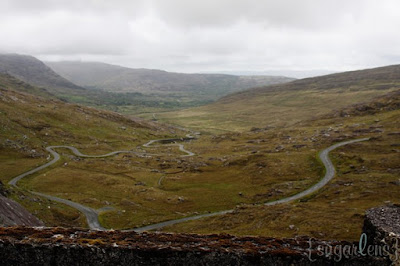 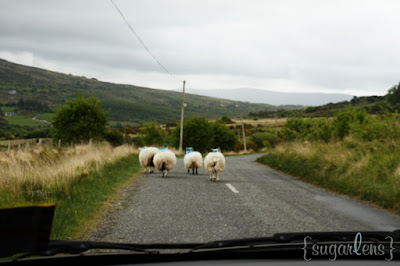 After taking in all the greenness, we started our drive to Killarney National Park. On the way, we passed by the town of Kenmare and decided to stretch our legs.

Kenmare is a really pretty, quaint town! It boosts stylish little restaurants and good shopping. I had lots of fun taking pictures, but I think this picture that hubs took more or less captured everything about the town. Small, charming, and busy with tourists! 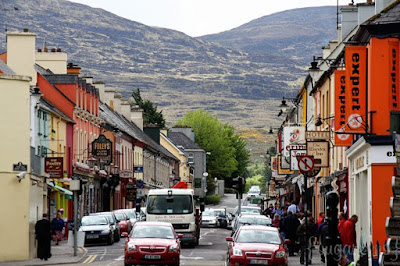 We continued our drive and, once we entered the national park, we saw the scenic Ladies View almost immediately. From the lookout point, there is a marvelous view of the Killarney Valley and Upper Lake. This particular view received its name from the view much admired by Queen Victoria's ladies in waiting, when they visited here in the 1800s. 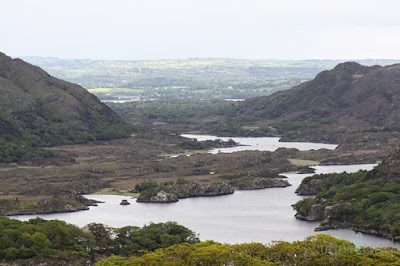 We later parked our car at a parking lot and walked to Torc Waterfall.

To get to the waterfall, we walked through a forest of tall oak trees. Oh my, this walk made me realize why Ireland is referred to as the Emerald Isle - everything is covered in different shades of green....everything! It's definitely one of my favorite places.

The waterfall itself is tiny, but nice. 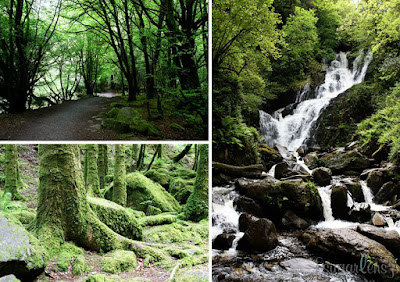 Near the waterfall is Mockross House and Gardens.

I found the gardens absolutely stunning - beautiful, calm, and peaceful. There are paths, streams, and all sorts of flowers in bloom. Although the Mockross House is part of the heritage site, we didn't visit the inside. You can only visit the house through a guided tour and we didn't feel like waiting around for it. 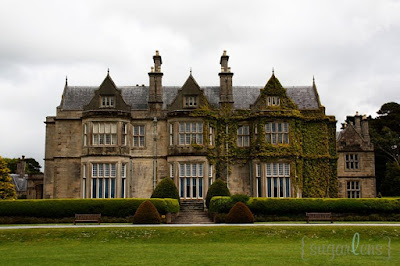 We returned to our B&B in late afternoon. After chatting a bit with our host, we had tea and cookies. The picture below is totally posed - we used the self-timer and took a picture of us reading the tour books in the lounge area. :) One of my habits when traveling is that at the end of each day, I like to refer to the books and make sure I hit everything. 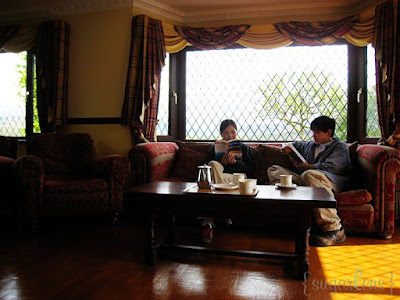 That night we walked to the town of Kenmare since we had nothing else planned. We visited gift shops and took more pictures. Very unlike hubs, but he left his adapter at the first B&B so we bought a new one.

We came back, showered, and spent the rest of the night watching New in Town.

*Oh boy, Day 4 was a bit stressful for us. Ireland is known for its small, narrow country roads. When we retrieved our car in Dublin, we opted out of getting additional insurance. This meant, if we were to put any scratches or dings on the car, we would automatically be charged 1500 euros. You can see where I am going with this piece of information. Yes, it happened. Hubs hit a rock and scratched up one of the hubcaps. The day went even further down the hill when we found out there is a ding on the passenger door.

After our anger faded (it took a looooong while), we eventually accepted the fact that we would be out of 1500 euros. Long story short, when we returned the car a few days later, imagine our delight when the agent didn't give us a hard time at all. Ah, we worried for nothing, but were well aware that we escaped by a margin. Whew.
Email Post
Labels: travel