Ireland: A Day Of Heritage Sites

I woke up Sunday morning feeling refreshed, but sore from head to toe. Luckily, it was going to be a rather easy day. Although I had ideas of where I wanted to go, after consulting with our host, Val, she suggested a few alternatives to avoid unnecessary driving. Since yesterday's crazy hike at Glendalough left me exhausted, I was more than happy to listen to the local expert.

We started the day with a hearty Irish breakfast - which included scrambled eggs, sausages, black pudding, mushrooms, bacon, tomato, and toast. On top of that, there were fresh fruits, cereals, and hot tea/coffee. Yum! My favorite was the black pudding - it reminded of what I used to eat in Taiwan. Sounds gross, but it's basicially a sausage made by cooking blood (pig) with a filler (barley, oatmeal, bread) until it is thick enough to congeal when cooled. So good.

We sat in this beautifully decorated dining room with another couple. I like B&Bs because you get a chance to meet other travelers and learn from them. 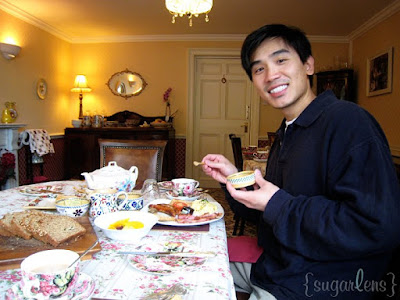 Rick Steves mentioned in his book that Kilkenny is famous as "Ireland's loveliest inland city". Since it was only our second day in Ireland, we didn't have anything to compare it with, but overall, I would say he's probably right! There were plenty of colorful shops and medieval facades.

Our plan that morning was to walk around the town of Kilkenny and then visit Kilkenny Castle.

The picture below is of St. John's Bridge, located right smack in the middle of town. We drove the bridge several times the day before while trying to find the B&B. It looks much prettier when you are not frustrated or sitting in traffic. :) 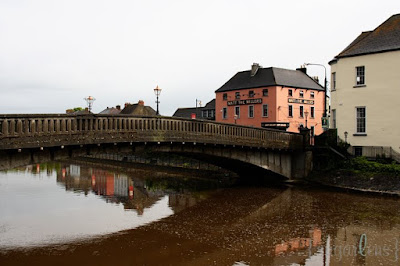 I took this picture of Kilkenny Castle (and River Nore) standing on the bridge. 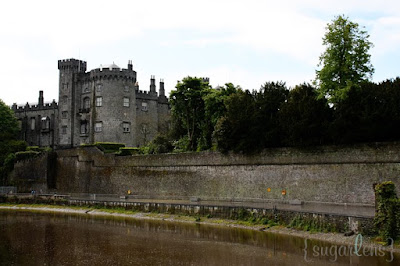 Not more than 20 minutes later, we arrived at Kilkenny Castle. 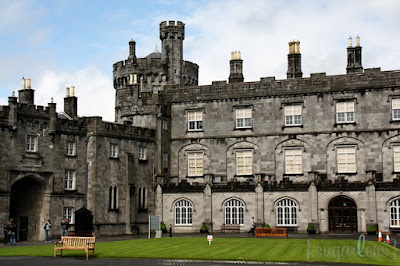 One of best tips Val suggested was for us to get what it is called a heritage card. Ireland has a number of heritage sites, managed by The Office of Public Works, and the heritage card gives unlimited admission to those sites. After doing some calculations of our own, we concluded that given the sites we planned to visit, we would most definitely save money with the card. Especially that with hubs' student ID (finally, the tuition paid off), it was only 8 euros for him. We paid 21 for me, though. We highly recommend it! We saw a lot more places than we would otherwise have.

Here is hubs with our spankin' new cards! 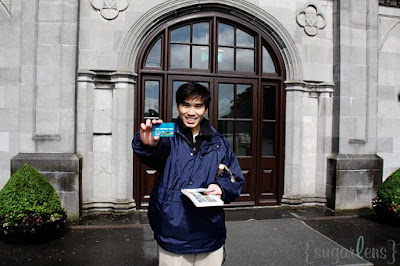 No photography was allowed inside the castle, but it basically included a library, drawing room, bedrooms, and a family-portrait gallery, which hung paintings of the wealthy Butler family (who controlled Kilkenny for 500 years).

There are gardens on the side of the castle, and extensive land and gardens to the front. We walked a bit, but it started to rain off and on. 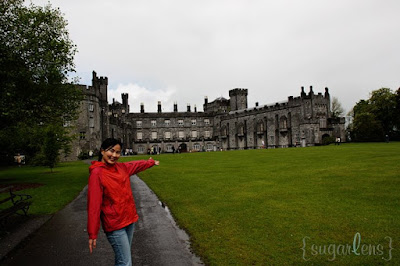 We ended our self-guided tour with a video (I know, we tend to do things in reverse) explaining the history of the castle.

We saw this dog on the way out. One thing I noticed about Ireland is that dogs don't necessary have to be leashed. Throughout the trip, we saw many dogs running around, wild and free. DC isn't nearly as dog-friendly. One time I took Pargo, leashed, to the WWII Memorial and got kick out by the ranger. 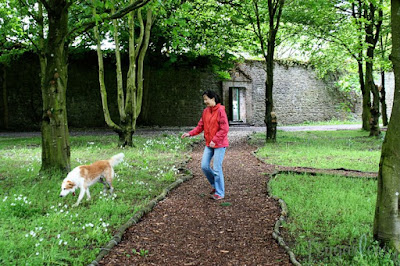 After the castle, we walked back to the B&B, got in the car, and started driving to our next destinations. We agreed to come back to town later to see some nightlife.

Armed with our new heritage cards, we wanted to hit as many heritage sites as possible! So off we went to some random places that never made it to our must-see list!

While on the way to our first destination, Jerpoint Abbey, we got terribly lost, but saw rolling hills and green pastures everywhere! 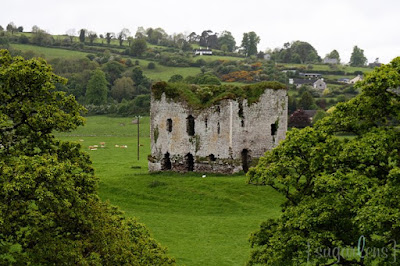 We finally found Jerpoint Abbey, flashed them our cards, and started touring the place. Unfortunately, I really don't know the history behind this abbey, so we basically just walked around and took pictures.

Here I am pretending to read the guide provided by the visitor center. 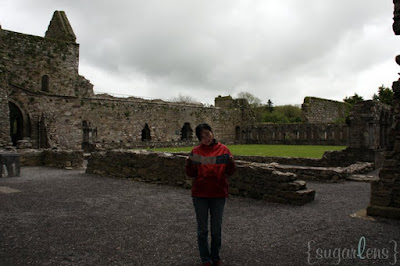 The highlight of the abbey is the sculptured cloister arcade with its unique carvings. 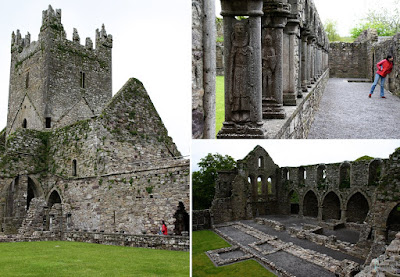 More details of the abbey. When hubs and I travel together, we take turns playing shutterbug. On this day, hubs took most of the photos. 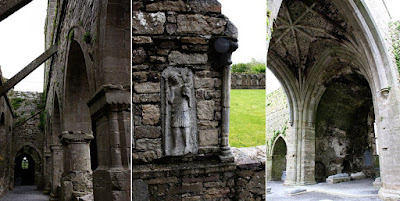 After the abbey, we drove to our next heritage site, Dunmore Cave!

The cave is formed by limestone which was laid down over 300 million years ago. To get inside, we had to walk down hundreds of steps. 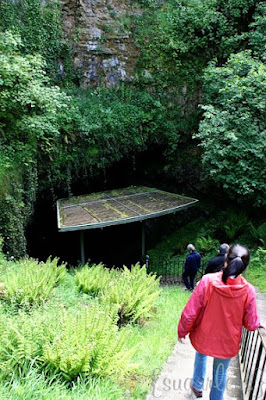 The cave, like all others, was damp and cold. Since the cave was only accessible by guided tour, there was a lot of standing around and listening to stories (including a story on a Viking massacre). After having just watched The Descent before the trip, all I wanted to do was leave.

At the end of the tour, the guide turned off all the lights and the cave went pitch black. That was probably the most fun of the tour, but I was glad to see sunlight again minutes later once I climbed the steps back out. 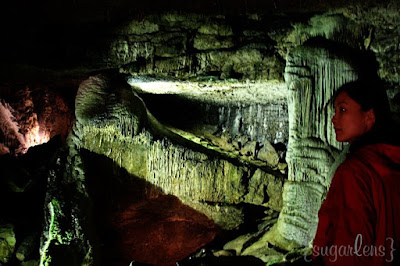 As we walked back to the car, we saw more typical Ireland scenery. LOVE that cluster of sheep! 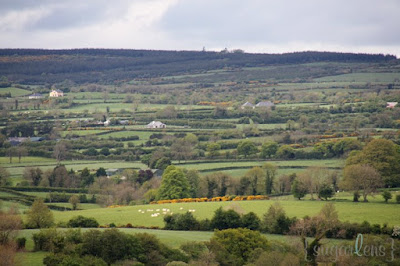 After the cave, we went back to the B&B and ate an early dinner of sandwiches (we had gone shopping earlier at a local market) in the room. Eventually, we fell asleep, but woke up with plenty of time to walk back to Kilkenny town for more sightseeing. However, the room looked so much inviting that we ended up staying in and went back to sleep a few hours later.

So all in all, we really didn't do too much on Day 2, but we were fine with that because we had a long drive ahead of us the next day. We were heading to the other side of the country!
Email Post
Labels: travel