cute as a button

See this (hideously) ugly shirt? I bought it years ago at J.Crew for 10 bucks. The me back then thought that it was too good of a deal to pass up, even if I would never actually wear it. Hubs said that this shirt was probably made from the scraps of other shirts. I sorta agreed. 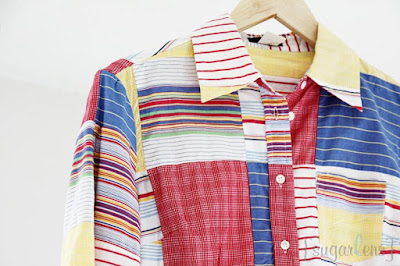 Yesterday I mentioned that I wanted to create something. More specifically, I wanted to make these oh-so-adorable fabric covered magnets, but didn't want to spend a ton. The project called for assorted fabrics, buttons to cover, magnets, and hot glue gun. I didn't have any of the supplies...at least so I thought.

Then I came home and saw that shirt hanging in the closet. Perfect. The...um...colorful pattern would make a good variety of magnets! It also dawned on me that instead of hot glue gun, the super glue we already have would also do the trick. All I had to buy were the buttons and magnets. And I just happened to have a Michaels 50% off coupon.

So after work today, I went to Michaels and bought a package of twelve 1/2" round magnets for $0.93. They didn't have the buttons so I ran next door to Walmart and found them for $1.28 for a package of five (3/4" round). I grabbed two packs.

After dinner, hubs and I got to work. I traced and cut. He tucked and pushed. He dotted the back with super glue. I placed the magnets on. It was teamwork and (unfortunately) the fun only lasted for 15 minutes. 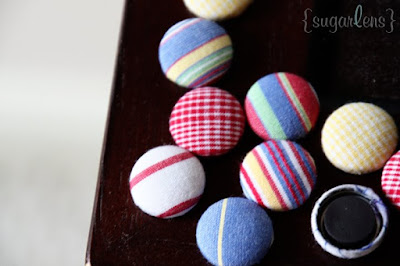 And here they are doing their thang. 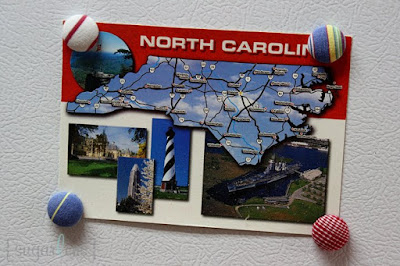 The most fun $3.50 I spent this week. Hands down.
Email Post
Labels: DIY