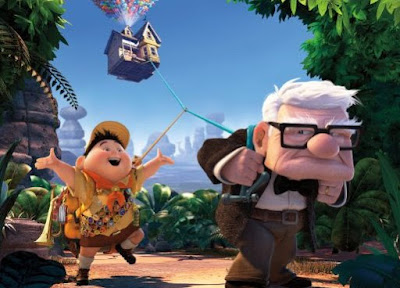 Three weeks after its opening date, we finally saw Up! As always, Disney/Pixar didn't disappoint - it was heartfelt, hilarious, and entertaining!

Up is about a 70-something ex-balloon salesman who fulfills a lifelong dream of adventure by tying thousands of balloons to his house and flying away to South America. Along on the journey is an ambitious 8-year old boy scout trying to earn his final badge and together, they find a giant, exotic bird and a dog that can talk.

The story is wildly imaginative, I love it.

My favorite part of the movie is the first ten to fifteen minutes. Using little dialogue, the opening montage tells the story of Carl and his wife, Ellie, and the life they share together. It is so visually touching that let me just say I wasn't the only one with tears in my eyes.

Have you seen Up? You should! I can't wait to buy it on blu-ray and watch it all over again.

----
After the movie, we had dinner at our old stomping ground, Maggiano's. Hubs finally got his fix of beef medallions and I had my usual pasta with mushrooms and chicken (Rigatoni "D"). Both delicious, but so so so rich. It made me feel gross, but in good way. :) The we stopped by Anthro, but left with nothing. Came home and gave both buppies a bath. We had a good night! 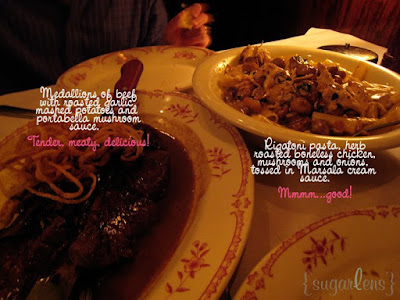