In late January when my mom and I started planning our trip to Spain, we first looked at a package on TripMasters.com. We were quoted roughly $1700 for the two of us, including airfare, transfer between Madrid and Barcelona, and hotels. However, we didn't like the flight schedules, nor we wanted the hassle of flying between cities, and lastly, we didn't care for the selected hotels. Of course, all that were customizable, but by then, the quote was up to $2000.

So we decided to do-it-ourselves for two reasons: 1) save money, and 2) make the entire trip just the way we wanted.

Here is the breakdown of our 6 nights/7 days trip to Spain, money-wise:

1. Airfare. We flew Delta and it was $972.44 for two. Our flights to Spain and back home were both delayed for several hours. It caused a lot of headaches and frustration. I am sure the overcast weather had something to do with it, but now I know to avoid JFK and ATL! 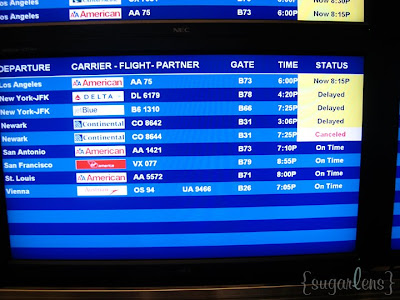 2. Hostals. As mentioned before, hostal is a Spanish word for a category of lodging. Hostals tend to be somewhat nicer than youth hostels, but cheaper and more personal than hotels. Hostal Cruz Sol in Madrid was $230.83 for 3 nights and Hostal OperaRamblas was $258.69 for 3 nights.

I have nothing but good things to say about both hostals. Both are clean and convenient and reasonably priced. Both have friendly and helpful staff! They provided exactly what we needed. Highly recommend!

Hostal Cruz Sol is located steps away from Plaza Mayor. Our room was on the second floor. 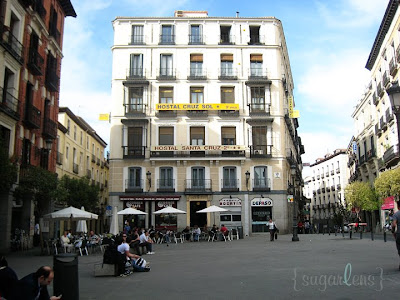 The room is small, but clean and adequate. The TV didn't really work, but we didn't have time to watch much anyway. 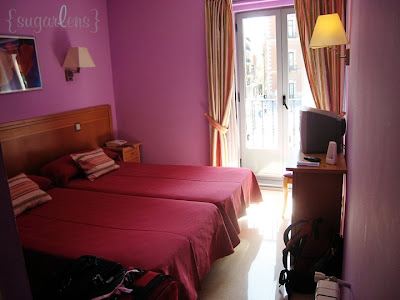 The room at Hostal OperaRamblas is bigger, but does not provide any basic toiletries. It is located right at one of the side streets of Las Rambla. 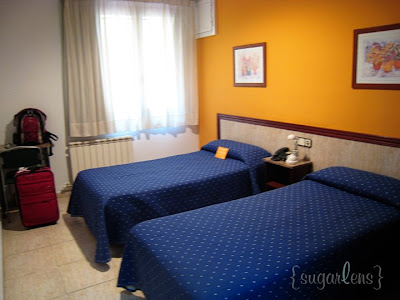 3. Renfe Operadora. Instead of flying between cities, we opted to ride the train. Although a bit more expensive, it was worth the price. We didn't have to deal with the hassle of going to the airport or the potential of flight delay. Our train ride was 3 hours long and it included lunch. If the train arrived at destination more than 30 minutes later than scheduled, there is a full refund. Our train arrived two minutes ahead of schedule.

We bought the tickets at home several weeks prior online for $257.69 (First Class) for two. With First Class tickets, we were able to wait in style at a posh lounge. 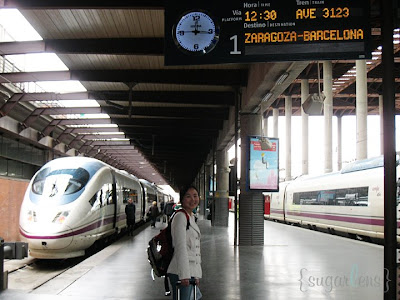 4. Etc etc etc. I love to experience local cuisine, but I must say that I am not fond of Spanish food. We had a few sit-down meals, even ate at a tapas bar, but nothing impressive, not to mention expensive. At the tapas bar, a small plate of calamari was 11 euro!

So instead, we had a couple of quick lunches at McD. To save even more, we bought stuff from supermarkets and made our own sandwiches. Once we got to Barcelona, the Boqueria Market was our go-to place for fresh fruits and baked goods. We had the best snacks there.

This tuna pizza with roasted bell peppers and drizzled with (a little bit) of cheese was probably the most tasty thing I ate in Spain. Only 1 euro! We got the last two pieces, just when the vendor was about to close for the day, at Boqueria Market. 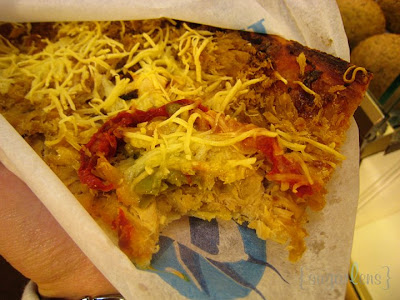 Our typical breakfast in Madrid. Coffee and pastry. We ate at the counter, standing up, like the locals! 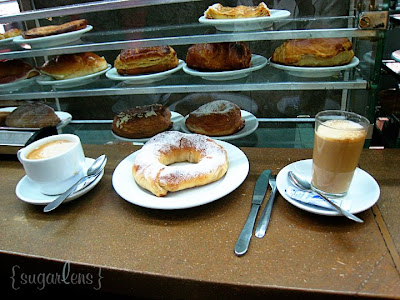 We bought water and fruits at a supermarket in Madrid to keep our diets healthy. I don't remember us having any veggies during the entire week, though. 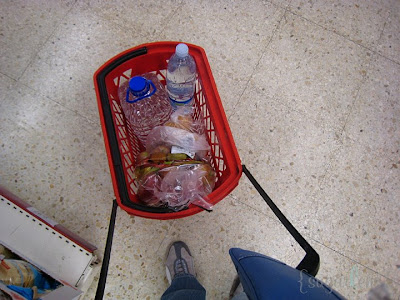 We tried another seafood paella at a restaurant in Barcelona, recommended by a family friend. Unlike the one we had at Plaza Mayor, this one was way. too. salty. 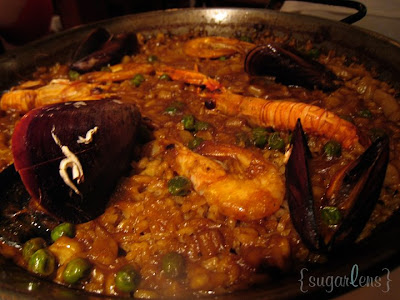 On the last night, I had a few euro coins left to spend, so I bought two scoops of gelato while strolling the Gothic Quarter for one last time. 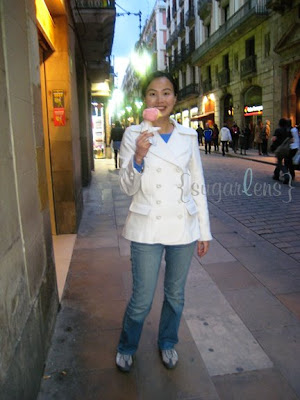 In all, we spent $362.91 on food and other miscellaneous things such as metro and entrance fee to various places.

My mom and I are both budget travelers so staying at hostals or not having a 3-course meal every night suited us just fine. We don't feel that we missed out on any experience because we were on a budget. In fact, I will say that we probably had a more authentic experience by doing everything on own own!

Oh, one last thing, we exchanged for euros before the trip at our local bank. The exchange rate at that time was 1 euro to 1.3266 usd. We paid in euro for the hostals upon arrival.

I hope this post is helpful to those who may be planning a trip to Europe! It goes to show that a trip to Europe need not be expensive at all, if you are willing to forego some luxuries, that is. :)

I have one more post to share on Spain. I will talk about my most memorable moment - but at the time, that moment made me so mad that I had trouble sleeping that night!