Ireland: A Day In Glendalough

For a ten-day international trip, we really didn't give ourselves a lot of time to plan.

We decided to go to Ireland one day and bought air tickets the next. Luckily, all the B&Bs we contacted were available/responsive and lodging accommodations were confirmed within a week. Then we made car reservation, checked out books from the library, and loosely planned our daily excursions. My coworker lent me a book of maps, hubs gave Homer a brain transplant, I exchanged currency, and bought some new clothes for the trip.

It was a whirlwind of activities and next thing we knew, we were leaving for Ireland!

We landed in DUB on a drizzling Saturday morning. After getting a brand new stamp in our passports and retrieving our rental car, a tiny blue Kia, we were on our way to explore!

To help us ease into a new time zone, the only plan we had for the day was to visit Glendalough in County Wicklow. Glendalough, just an hour south of Dublin, is a monastic settlement in a picturesque natural setting. Using Rick Steves' Ireland 2009* as guide, all I really wanted to do was walk around (leisurely), see the monastic city, and take pictures of the Lower and Upper Lake. I didn't expect to spend more than 2 or 3 hours here.

Thanks to Homer, we arrived without any hiccups. The driving on the left part, on the other hand, was a bit scary. But once we got out of the city - when sheep and rolling hills started to appear - I felt myself relaxing more. Kudos to hubs for learning how to drive the roundabouts so quickly!

Glendalough gives a sense of peace, serenity, and calmness. The air is refreshing and clean. I liked the place immediately. We were surrounded by a thousand shades of green. 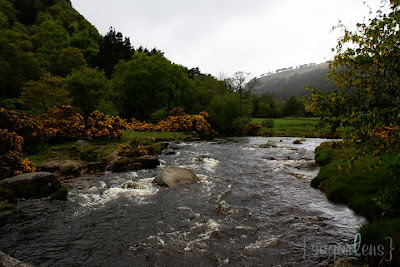 We followed the Green Road... 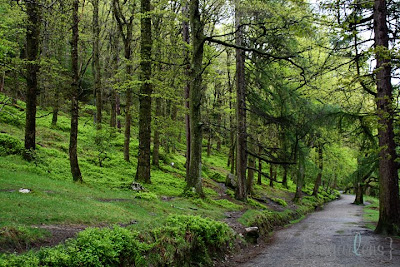 ...and approached the monastic city from across a pretty stream. 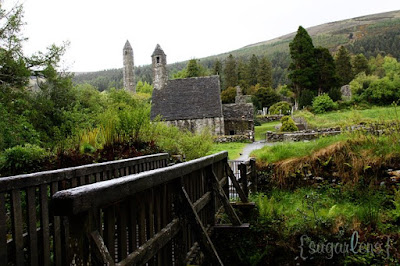 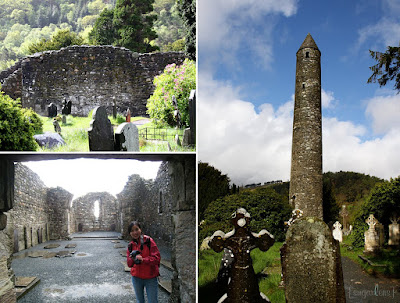 The two lakes of Glendalough are known as the Lower Lake and Upper Lake. Most of the monastic ruins are located near the Lower Lake so it wasn't a long walk before we were greeted by this view: 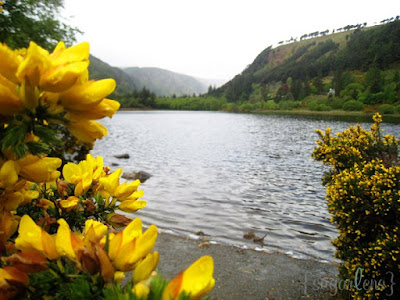 Since I really only had 3 specific things I wanted to see in Glendalough and already saw 2 of them within the first half hour, we took it slow and took pictures along the way. Being that it was our first few hours in Ireland, we were in awe by all the greenness. 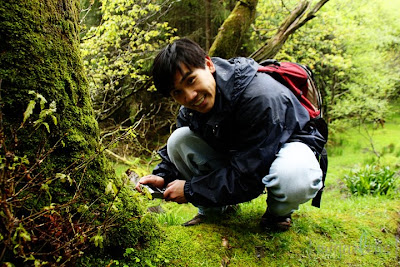 The Upper Lake is the starting point of many trails - ranging from short strolls to demanding mountain hikes. If anything, all I wanted to do was a couple of short strolls to see the waterfalls.

The area around the Upper Lake was very pretty. Since it was probably only around 10:30ish when we got there, we didn't see more than a handful of people. 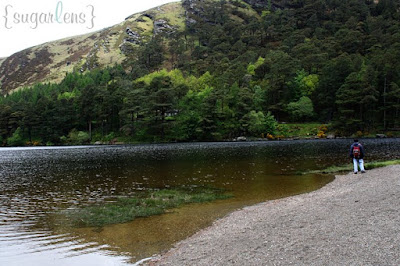 Another shot of Upper Lake. If you look close enough, you can see a waterfall at the very end. This is when hubs said that he wanted to see the water up close and personal. I didn't have any problems with that. From where we stood, I saw a nice paved road leading to the waterfall. It was flat surface. We started walking. 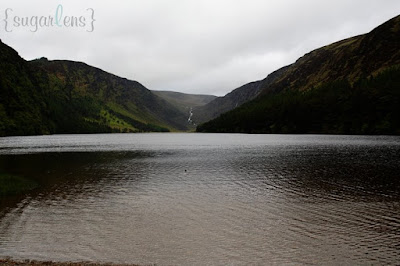 It took about 30 minutes to get to the point where we could see the waterfall more closely. After we took the pictues below, I expected us to turn around and head back. But hubs wasn't satisfied, he saw a couple of people climbing up along the waterfall and decided that we should do the same.

Reluctantly, I agreed. It didn't look too bad. Little did I know that this would be the start of a THREE hour hike up rugged rocks and down slippery paths. On top of that, the weather was insane - scorching hot one minute and freezing cold the next. Oh, I was not a happy camper. Of course, to make it worse, we were on empty stomach and no sleep.

Highlight of the hike included: 1) Hubs giving me piggyback rides to cross some streams (because the stepping stones were too far for me to hop), but losing his balance and getting his shoes completely soaked, 2) Me huffing and puffing - and occasionally dropping f-bombs - all the way to the top - I really didn't think I was going to make it, 3) Our hands went completely numb from the cold, 4) Feeling invincible when we reached the top, and 4) Me getting mad (all over again) at hubs when I realized that after the top, there were more uphill climbing to do. 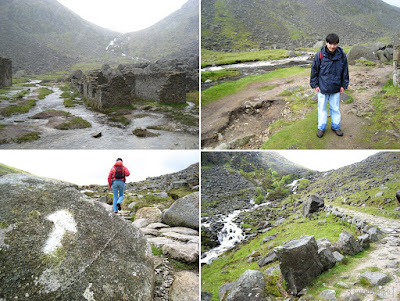 A picture of us at the top of the waterfall! 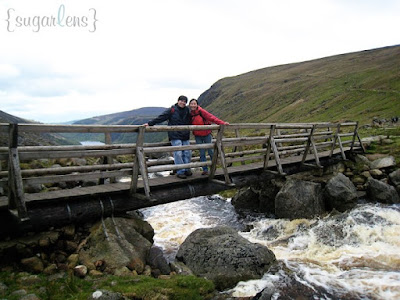 Slowly working our way down. Wicklow Mountains and Upper Lake in the background. 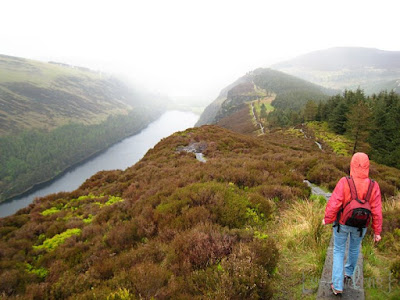 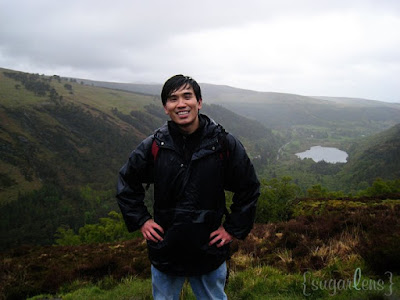 All smiles after we safely arrived to the bottom. 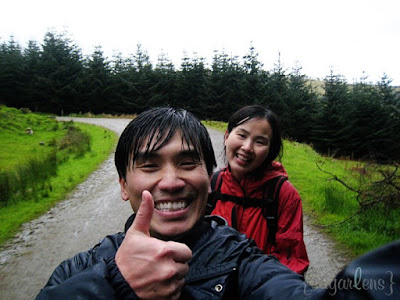 At the end of the hike, I decided to go to the Visitor Center (I know, shouldn't we had gone before the hike?) and see a map of the walk we just took. I talked to the guy behind the desk and innocently asked about the trails and their level of difficulty. I found that the white trail, the one we took, was most treacherous and longest of all trails in Glendalough! On that day, the guy said that he would not recommend hiking that particular trail due to weather and high elevation. We did not tell him that we just got back from it.

To be honest, I did not enjoy the hike. I would have preferred easy strolls, especially just having arrived to Ireland. But now looking back, I am glad we did it. It was quite an experience and we were rewarded with rich scenery. I am also happy that we arrived early and didn't see many people along the way. Just as we were leaving, tour buses started to appear.

After Glendalough, we made a 2-hour drive south to Kilkenny, where we were staying for two nights. The drive was not at all easy. We were both tired (and getting incredibly sleepy) and dazed. Once we got to Kilkenny, it took us forever to find the B&B because there were no darn street signs!

When we finally arrived at last, we were greeted warmly by our host, Val. She showed us our room (full post on all the B&Bs we stayed at another time) and gave us hot tea and cookies. She also suggested Bollard in town for authentic Irish pub food. Hubs and I hurried out for some dinner and relaxation.

Dinner was delicious. Hubs had beef stew and I had chicken and mushrooms in puff pastry. It was so good to finally have some real food. 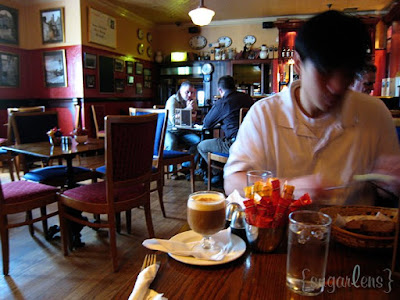 After dinner, we immediately went back, showered, and crashed into bed. Our first day in Ireland was over. And it was quite a day.

*In addition to Rick Steves, I also brought with me Fodor's Ireland. I feel that Rick Steves gives you the highlights (the must-sees), but it's important to complement that with another guide book that has more depth.
Email Post
Labels: travel