Although Barcelona is quite big, according to Rick Steves, tourists just need to focus on four major areas: the Eixample, La Rambla + Gothic Quarter, the Harborfront, and Montjuic Hill.

Previously in my posts, I talked about our whirlwind tour of Gaudi masterpieces (all in/around the Eixample district) and our stroll down La Rambla + Gothic Quarter. In this post, I will share some pictures of Montjuic and our short vist to the Mediterranean Sea.

Montjuic, a mountain park, was the site of the 1992 Summer Olympic games. Other attractions include Joan Miro museum, botanical gardens, a recreated Spanish village, National Art Museum of Catalonia, and the Montjuic castle. If you visit all the attractions, it would probably take you one full day (maybe two) to see everything.

To get to Montjuic, we took the metro to Parallel (btw, Barcelona's metro system is so easy to use! And cheap too!) and then the Montjuic funicular, which is integrated in the metro network, to reach the top. Very convenient. 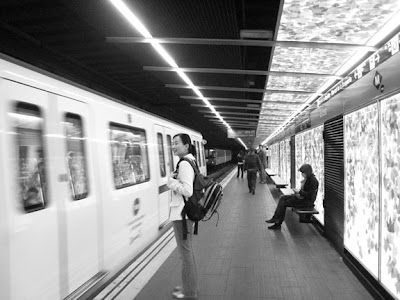 Once we got there, we saw several botanical gardens (but the rain made them not particularly enjoyable) and Joan Miro museum.

However, we really wanted to see the Olympic Stadium and the view of Barcelona skyline. So my mom got the brilliant idea of taking the Montjuic bus (it circles the park) to get our bearing instead of walking aimlessly.

When we finally got on the bus, for some reason, it dropped us off at the bottom of Montjuic, Plaça d'Espanya! Oopsie.

However, it wasn't a total loss. At the bottom of Montjuic is National Art Museum of Catalonia. We did not go inside, but the building is a work of art itself! I wish it wasn't under construction.

During the summer evenings, when the Magic Fountain (pictured below) illuminates, it attracts visitors to watch a spectacular display of light, water and music. It's beautiful, I've seen pictures. 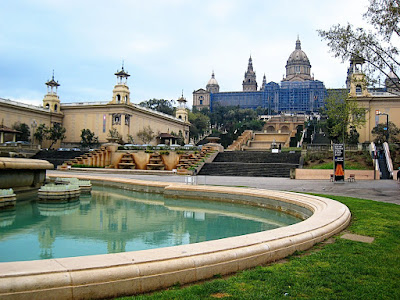 Still wanting to see the Olympic Stadium and the view of Barcelona from above, we decided to walk back to the top. On the way, we saw statues.... 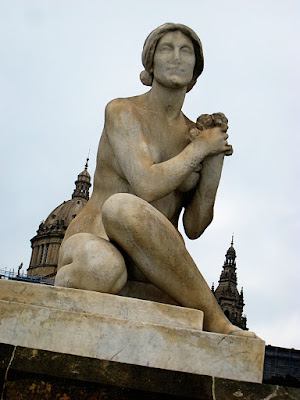 ...and standing in front of National Art Museum of Catalonia, we saw this. 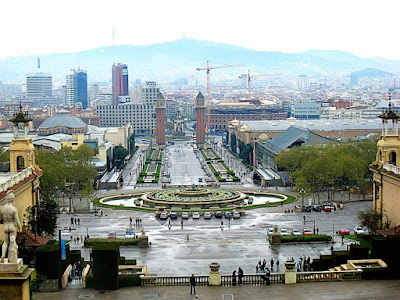 Once we got out of the museum vicinity, we saw signs everywhere that pointed us straight to the Olympic Stadium.

It looked awfully small when compared to the Bird's Nest. Then again, it was 17 years ago. 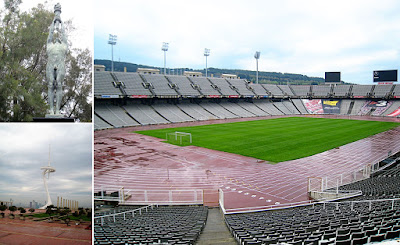 The Montjuic castle sits on top of a cliff, which makes it one of the best observation points for views across the city. In order to reach the castle, visitors can opt to take the Montjuic cable car. However, that would set you back $12. So instead, my mom and I walked up. It was steep and winding, but not dangerous. By then, the rain had stopped so it wasn't a bad walk. It only took about 10 minutes.

Due to its fortress-like appearance, the castle now houses a museum dedicated to anything military. I wasn't interested in that at all. 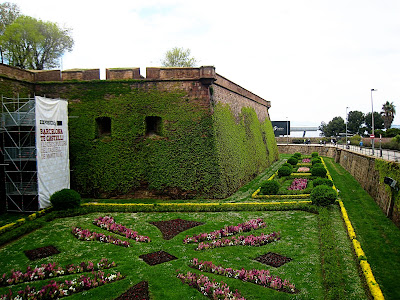 I was busy taking pictures such as this one below. The view took my breath away! I enjoyed looking out to the sea and the maze of streets. It was also fun identifying landmarks around the city. I saw La Sagrada Familia in the distance (not shown in the picture). 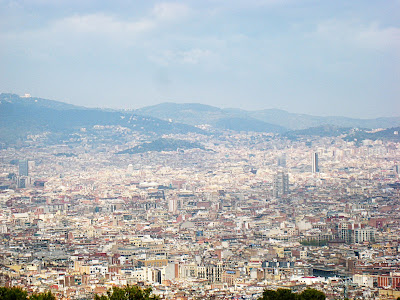 We eventually made our way down to the bottom and because the day was still early, we started walking around the city. We simply looked at the maps we got from the Visitor Center - you know, the ones that highlight all the tourist attractions in bold - and saw as much as we could on foot.

Among all the places we saw, I like Arc de Triomf. It has a big open space to sit and people-watch. 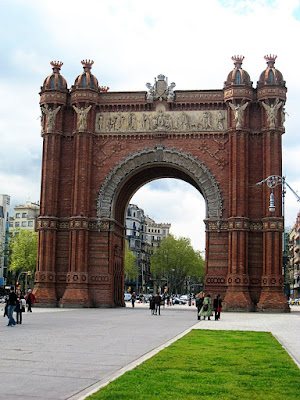 We actually went to the beach on our first day in Barcelona. It was a dark and gloomy day - definitely not beach weather. We said "hi" to the Mediterranean Sea and left pretty quickly. Lots of cruise ships leave from Barcelona, so hopefully I will see it again one day. 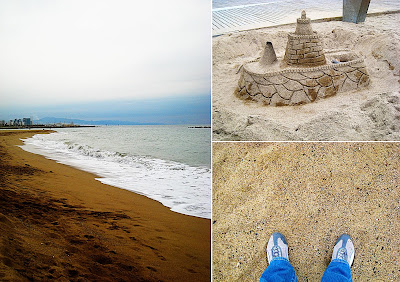 We were in Barcelona for just 2 1/2 days. I think the perfect itinerary would be 4 or 5 days. Even though we saw all that we wanted to see, I think an extra day or two would help us slow down and maybe do a short excursion from the city.

Overall, I recommend Barcelona as a great place to visit for some beautiful sights and rich culture.

Next: I take you to Madrid!