Between the two cities we visited in Spain, I like Barcelona better. So even though the first leg of our trip was to Madrid, I am starting my trip posts with Barcelona.

Even with Barcelona, I am blogging out of order, too. We actually went to see all of Antoni Gaudi's (a famous architect) creations on the second day of our stay in Barcelona. That day was probably the worst day of all, weather-wise. It drizzled off and on the entire day. I did not get many good pictures with my little point and shoot. However, with some Photoshop magic, I think they are presentable!

I like Barcelona for its proximity to the Mediterranean Sea, the crooked streets of Gothic Quarter, the vibrancy of Las Ramblas, the fancy Eixample neighborhood, and of course, the works of Gaudi throughout the city.

We declared our second day in Barcelona Antoni Gaudi Day and saw all of his masterpieces.

After a quick breakfast of fresh fruits at la Boqueria, we hopped on the metro. Our first stop - La Sagrada Familia!

La Sagrada Familia is probably Barcelona's best known landmark. The construction of this landmark cathedral began in 1882 and continues to this day. 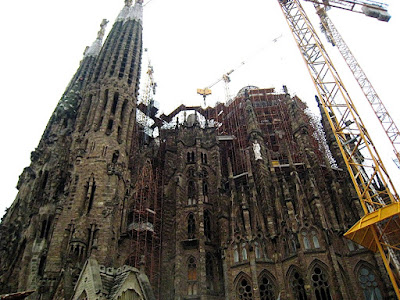 The cathedral has three façades. The Nativity façade to the east. It was built before work was interrupted in 1935 and bears the most direct Gaudi influence. The details were so intricate. 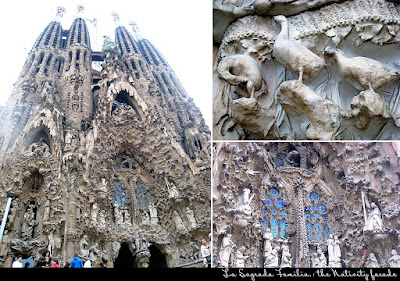 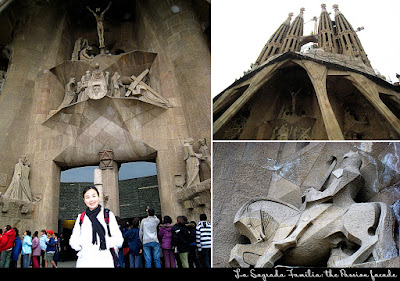 The Glory façade to the south is yet to be completed.

The interior of the church is one big construction zone. However, it is scheduled to open for worship by September 2010.

Overall, I am not as fascinated with this cathedral as much as others. But I happily checked it off my list and we moved on.

We then jumped back on the metro and then took bus #24 to Park Guell.

I like Park Guell! This colorful park started out as a housing development, but was never completed. The city took over the property and turned it into a public park.

On the day we went, even though it was cold, there were tons of kids on school trips. I had hoped to take some shots of the bench, decorated with ceramic fragments, without any people, but alas, it didn't work out. 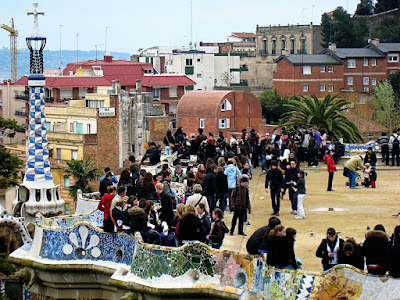 Details of the ceramics up-close. The park also offers some panoramic view of Barcelona. 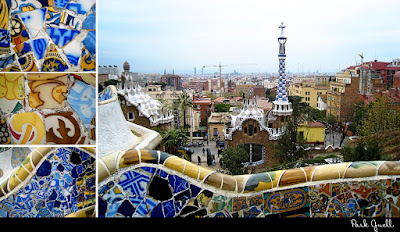 More details. At the entrace of the park is a lizard fountain spitting water. 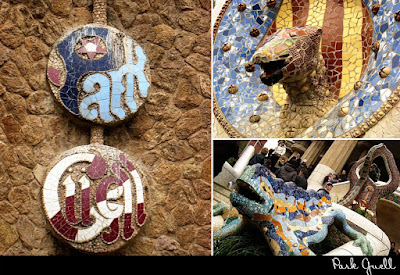 I thought the park was really beautiful and a nice place to relax and have picnics. My mom and I stayed here for a while and had snacks, but eventually, the chilly weather was too much to handle. We walked around the would-be market and the central grand plaza a bit before continuing on with our Gaudi Day tour.

We walked and then metro-ed to our next stop: La Padrera.

La Padrera was meant to be an apartment complex, but is now an office building. There is an entrance fee to the building and the rooftop so my mom and I skipped it. Instead, we took pictures from the outside and went to the gift shop. At the gift shop, we saw some really nice postcards of La Padrera (interior and rooftop).

I think most people either love Gaudi's designs or hate them. I will take the easy way out and say that I am partial to them. I like simple clean lines, and this rippling facade is the exact opposite. However, I do like different. This building provides a sharp contrast to the neoclassical structures that comprise the neighborhood.

Down the street from La Padrera is Casa Batllo, another building designed by Gaudi. The building has more colors (the façade is decorated with a mosaic made of broken ceramic) and the balconies remind me of waves. I have a feeling that Gaudi didn't like straight lines. Again, because of the entrance fee, we did not go inside. 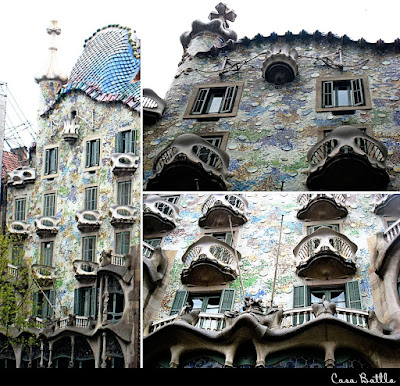 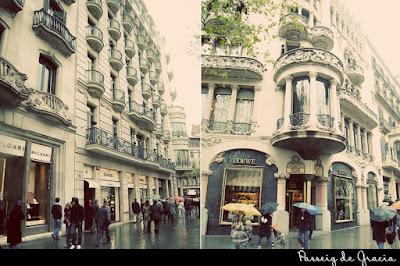 Passeig de Gracia isn't far from where we were going next. On a good weather day, I would have preferred walking (just to see more of Barcelona), but on that rainy day, we got back on the metro and off we went to explore the Gothic Quarter.

What do you think of the works of Gaudi? Yay or nay?

Next I will take you down the streets of Las Ramblas and Gothic Quarter!
Email Post
Labels: travel