I woke up yesterday feeling really cranky. I was lethargic, sloppy, and still getting over my cold. In a word, I felt gross.

As it was a nice day out, I decided the best way to get myself out of the funk was to be out, even just for a little while. So hubs and I got dolled up, packed up the pups, and went to get some cupcakes at this new local cupcakery called Cupcakes Actually.

Cupcakes Actually opened not more than two weeks ago, I believe. They offer six flavors and the price per cupcake ranges from $3.05 to $3.75. The store is conveniently located at Fairfax Corner, where there is plenty of parking. However, because of the boys, hubs dropped me off while he stayed in the car with them. 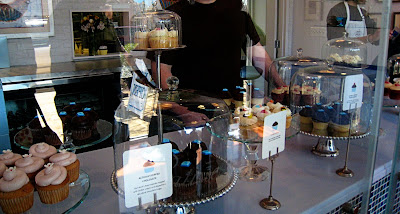 Cupcakes Actually definitely pays attention to details! The store has a sky blue theme that runs throughout and the cute little cupcakes are neatly presented on cake pedestals of varying heights. I picked two cupcakes, Actually Dipped Chocolate + Strawberry Fields (both shown in the picture above) and they were nicely packaged in a blue box and then placed in a small shopping bag!

After meeting up with hubs, we drove to a nearby field and enjoyed the cupcakes while the pups ran around.

I really liked the cupcakes!

The strawberry cupcake was infused with light flavors of strawberry and the airy butter cream frosting made the cupcake sweet, but not overly so. (It tasted a lot like the Sprinkles' strawberry cupcakes I made! Hubs even thinks that mine tasted better.)

The Actually Dipped Chocolate was delicious, too. This devil's food cupcake was topped with light butter cream and then dipped in chocolate fudge. The frosting looked and tasted marshmallow-ly. I was not disappointed. (Hubs' take? Just another cupcake, not worth the price tag.)

Ultimately, although I love the cupcakes, this was a very frivolous spending that I won't do it again for a long time.

After the cupcakes, we ran around with the boys to work off the calories before heanding home.

We were gone for maybe a little bit more than an hour, but what a mood enhancer! I felt a lot better and ended up having a very productive day!