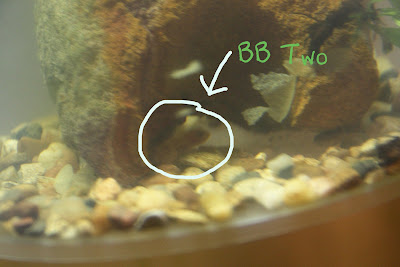 Wow, time is really flying by. Has it really been almost a month since I lasted posted about BB Two?

Last time you saw him, besides his eyes and tail sticking out, much of his body was still inside his yolk sac. He was fragile and barely moving. I worried that he wouldn't make it.

But look at him now - all big and strong! About two weeks ago, after his yolk sac completely dissolved, he started eating flakes! I feed him once a day and get strangely happy whenever he eats.

Everything is going swimmingly. Heh.

My prediction is that BB Two will stay inside his little private resort for at least another 2-3 months. Hopefully by then he will be big enough to join the rest of the gang in the tank.
Email Post
Labels: fish