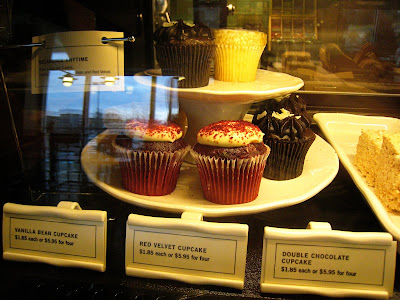 A couple of years ago at his company's holiday party, hubs won a Starbucks gift card. Since neither one of us are coffee drinkers, the card has been sitting in my wallet ever since.

Few days ago, I found out that Starbucks carries cupcakes! Apparently they have been doing so for at least two years.

Better to be late than never, I couldn't wait to try.

Priced at $1.85 each or $5.95 for four, the price is a lot more reasonable than the other cupcakeries I visited before. Still expensive, but my gift card sealed the deal.

So after work today, I picked up four cupcakes - two Red Velvet, one Double Chocolate, and one Vanilla Bean. I *think* they only have these three flavors available.

After dinner, hubs and I dove right in.

Not usually a chocolate person, I actually liked the Double Chocolate the best. Maybe it was because it was the first one we tasted, but the moist chocolate cake combined with sweet buttercream frosting really hit the spot!

We had Red Velvet next, which I thought was too heavy and dense, especially the cream cheese frosting. I definitely felt the sugar shock afterwards. Hubs actually liked the Red Velvet the best - he's the exact opposite - the denser, the sweeter, the heavier, the better.

Lastly, the Vanilla Bean. While the cake portion was moist, I found the frosting, again, a bit too heavy for my taste. However, it had great a natural vanilla flavor.

I like my cupcakes light and fluffy so I am not a fan of Starbucks' heavy and, sometimes, overly sweet cupcakes. For hubs though, they were perfect for him. So I guess it all depends on what you prefer!

Would I try them again? Most likely not. But I would if they introduce new flavors. After all, I still have some money left on the gift card to spend. :)

Have a sweet weekend everyone!