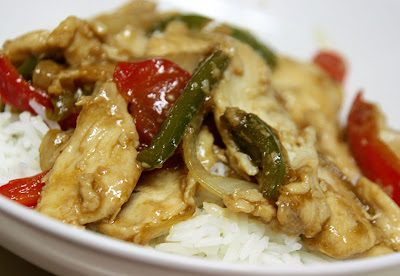 Canton Beef is one of the entrees available at Disney World's Nine Dragons Restaurant. Even though hubs and I have visited the restaurant several times, we never tried that particular dish.

I heard that Nine Dragons, since the renovation, has become (even more) overly priced for very little food. Plus, since there are so many other restaurants to try at Disney, it's unlikely we will return anytime soon.

But, I can still make Nine Dragons dishes at home! Remember that link I found last year? Well, I haven't forgotten about it. It's just taking me a very long time to go through it.

I had some bell peppers and onions in the fridge, so I decided to give Canton Beef a try. Instead of beef flank steak though, I used chicken breast. Since we never had it before at the restaurant, we had nothing to compare it to, but it was so delicious over white rice that I will surely make it again. Simple, succulent, and homey. I especially like it that it's a one-dish meal - less pots and dishes to wash.

This dish reminds me of Cashew Chicken, which makes sense since the sauce has the exact same ingredients.

1. Slice chicken breast. Combine marinade ingredients. Marinate chicken in a bowl for at least 30 minutes. Cut peppers and onion into bite-size pieces. Set aside.
2. Mix the sauce ingredients in a bowl and set aside.
3. Place approximately 1 cup of cooking oil in a heated wok or fry pan and heat oil to medium heat. Place marinated chicken in heated oil and cook until almost done. Drain chicken into a strainer. Set aside.
4. Leave about a teaspoon of oil in the wok. Place it back on the stove. Stir-fry onion and peppers for 30 seconds. Pour sauce mixture over onions and green peppers. Stir occasionally with a spatula.
5. When sauce mixture begins to darken in color, place beef back into
the wok and stir-fry swiftly. The dish is done when the peppers have softened.
6. Serve hot with steamed white rice.