About two weeks ago, I wrote about Bunny, our female cichlid, and the 70+ eggs she spat out of her mouth just before she died.

I showed a video of our homemade tumbler. Hubs did a great job of using an empty dvd box and yarn to make a little home for the eggs. We did everything we could to help them survive the traumatic experience of having being released from their mother's mouth prematurely.

Unfortunately, the eggs were disappearing fast.

Some became fungus and had to be removed from the dvd box.

But some were literally disappearing! Every morning we would wake up and see less and less eggs in the dvd box. Why? No clue. Hubs suspected that other fishes in the tank swam into the box at night and ate them. I disagreed. No way, they were that smart. Besides, how did they know to do it at night when we are not watching? And come to think of it, how come they didn't finish all the eggs at once?

There were many unanswered questions.

Anyway, shortly, not even a week after, we found ourselves with two eggs left. Two! Still, we were happy campers because we didn't expect any to make it at all.

And guess what? They were slowly hatching! We saw their eyes and tails and egg sacs getting smaller. They were tiny, barely moving, and transparent.

I told hubs, "They are Bunny One and Bunny Two."

He responded, "Umm, okay. But how about BB One and BB Two? BB stands for Baby Bunny."

Few days ago, the unfortunate happened again. One baby didn't make it. We found him covered in white fuzz. So sad.

Hubs mentioned, "We don't know which one died, BB One or BB Two."

I decidedly said, "It was BB One who died. BB Two is left."

So there you have it. Out of 70+ eggs, only one survivor. BB Two is twitching more, his egg sac is noticeably smaller, but ultimately, he's still fighting for survival.

I am hoping for another miracle. 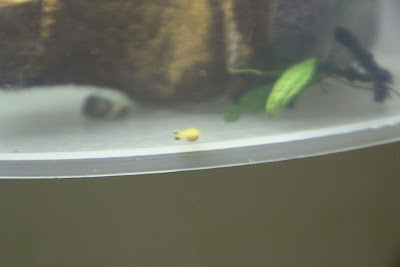