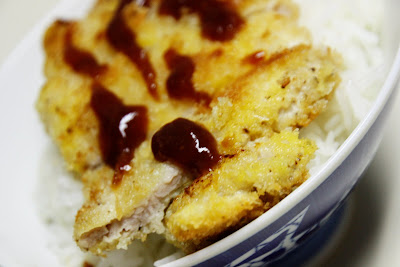 とんかつ (prounced ton-ka-tsu) is a popular dish in Japan, not only because it is very easy to cook, but also because it is a nutritious and wholesome meal. Although there are many restaurants in Japan that specialize in this Deep Fried Pork Cutlets dish, it is also often served as a family meal at home.

I had some Japanese bread crumbs in the pantry and pork loin in the freezer, so I made the dish tonight. Instead of deep frying, I shallow fried in a pan.

とんかつ is served with とんかつ sauce drizzled on top. I made my own sauce, too (recipe included in the post). It added some tangy and sweet flavors.

Dinner included とんかつ and a side of veggies. The pork was crispy and juicy. Oishii!

I will say that although とんかつ is easy to prepare, it involves lots of dish washing and preparation. At the end, everything turned out delicious so I will definitely make it again!

1. Pound meat with back of the knife to tenderize.
2. Sprinkle salt and pepper on the pork.
3. Roll pork lightly on flour until coated, dip in beaten egg, and cover in panko.
4. Shallow fry pork in heated oil until it turns brown (make sure oil is hot).
5. Take out pork and put them on a paper towel to drain the oil.
6. Slice pork into smaller pieces.
7. Serve with warm rice and tonkatsu sauce.

There are many ways to serve とんかつ. One of them is on top of miso noodle soup - exactly like what we had at a little Japanese restaurant in Oahu. 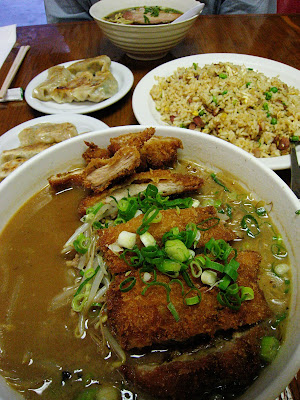