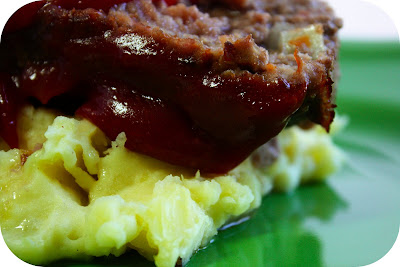 More often than not, whenever I am at Disney World, I choose my entrees base on whether or not they come with a side of mashed potatoes. Yes, I am a bit obsessed with it. :) Today I finally got around to testing out some Disney recipes I blogged about before. And of course I started with mashed potatoes.

This recipe for mashed potatoes is from Whispering Canyon Cafe at the Wilderness Lodge, which I have never actually eaten there. I used a tiny bit less butter than it called for and half the milk. It still turned out creamy and delicious and lumpy - just the way I like it.

What goes better with mashed potatoes than meat loaf?

The Mom's Meat Loaf recipe is from 50's Prime Time Cafe, which the hubs and I frequently eat at when we visit Disney's Hollywood Studios. We never had this meat loaf at the restaurant, but I thought I would give it a try. The glaze rocked so I ended up making more to be brushed on top. I really liked the sweet and tangy flavor. Without it, I would say that the meat loaf is nothing special.

I presented the dish restaurant-style with mashed potatoes at the bottom and a slice of meat loaf on top. Overall, the dish was okay, but not as good as I had expected. The hubs loved it, though, so it was all good!

Dice peppers and onions and set aside for later use. Combine meats and seasonings. Add vegetables. Place meat mixture in oiled loaf pan. Bake at 350ºF oven for 1 hour or when meat is no longer pink at the center.

Combine all ingredients until mixture is smooth.

1. In a large pot, bring the water to boil.
2. Add the potatoes and cook until cooked through, about 40 minutes.
3. After the potatoes are cooked, remove and strain. Remove the skin.
4. Place the potatoes in a large mixing bowl.
5. Add butter, milk, salt, & pepper. Mix well until smooth and creamy.
6. Adjust milk and seasoning to taste if necessary.
7. Serve hot.