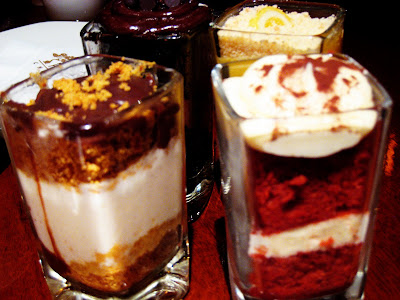 The hubs and I joined two of his former co-workers for lunch at P.F. Chang's last weekend. The wives did not come so it was just me versus the boys.

We ordered four entrees to share - Mu Shu Pork, Orange Peel Beef, Coconut Curry Vegetables, and Cantonese Chow Fun. I really liked the coconut curry dish, which was surprising because I typically shy away from anything coconut-y. Mmm...the tofu was cooked to perfection.

Other than that, the food was mediocre at best.

The best part of the meal came in the end. Mini desserts! They were delicately presented in these tall shot glasses. Too pretty to eat! Trendy, too! The guys humored me as I gathered the desserts for a group picture. I had the red velvet. It was velvety gooooood!

I left the restaurant satisfied. I had a good time - didn't mind being the only girl present at all.
Email Post
Labels: friends + family love