Road to Pesto: Friend Or Foe? 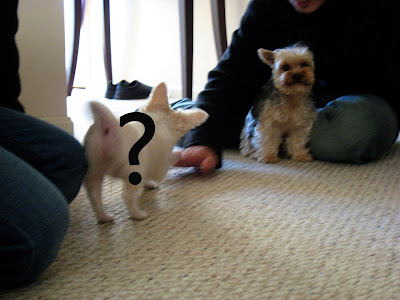 Yesterday was a fun day - we got to see the puppy again! The breeders came to visit and the purpose, as I mentioned before, was to make sure that the two buppies (boy puppies - yup, we made up that word) get along. We weren't expecting them to become best buds, but it was important for them to be civil to each other, at the very least.

Well, I am elated to announce that...

Pargo (and Pesto) passed the test!

The breeders stayed for about an hour. During the first half, Pargo was basically not interested in Pesto at all. Being very puppy-like, Pesto wanted to sniff and play chase with Pargo. Pargo, in turn, would run away, either to me or the hubs for protection. Twice or three times, Pesto got too close and Pargo growled at him, which was a big no-no. The hubs and I made sure to yelled at him whenever he did that.

The hubs and I both played with Pesto. Pargo just sat there and watched everything (very much like the photo in the post). He must had been thinking, "um...I don't like this!".

The second half of the hour went a bit better. Although Pargo was still aloof to Pesto, I could tell he was more relaxed and was okay with having Pesto around. In fact, Pesto drank water from Pargo's bowl and he didn't get territorial at all. I think it was upon seeing that, the breeders realized that Pargo is a good and calm doggy. :)

Pesto is full of energy. The whole time he was here, he didn't sit down once. Always sniffing, biting, exploring, and on the go. He's going to be a handful! He's definitely more outgoing than Pargo. It was his first outing and he wasn't shy at all.

Pargo and Pesto have two very different personalities - both unique in his own way.

I can't wait to bring Pesto home! Because we are leaving for Jamaica soon (8 workdays left!), the breeders have agreed to keep Pesto until after the new year. Come 1/2, the hubs and I are driving straight to MD to pick up our little guy! I will be living with 3 boys. :)

I am not ready to show Pesto to the world yet. ;) Last time I showed you a blurry picture of Pesto's head. This time, you get a picture of his little butt. BUT! I can't wait to show you pictures of Pesto (from head to paws) in the near future!
Email Post
Labels: love